Still no details on the cause or circumstances surrounding the Thursday death of former Vol and current Crimson Tide offensive lineman Aaron Douglas, but following the confirmation of his passing by his high school coach, the University of Alabama has released an official statement from Nick Saban and athletic director Mal Moore. We've reprinted part of it below:

"It is with tremendous sadness that we received the news of the passing of Aaron Douglas," said Alabama Director of Athletics Mal Moore. "Our prayers and sympathies are with the Douglas family at this tragic time."

"It is a tragedy anytime you lose someone close to you and even more so when it is a member of your family," said UA head football coach Nick Saban. "Aaron was a part of our family and always will be a part of our family at Alabama. He was an outstanding young man and we were excited about what he had accomplished as a player and a person in the short time he was with us.

Douglas is also being remembered fondly by former and current teammates (and a certain former head coach) of both schools. Here's Erik Ainge, who left for the Jets just as Douglas was entering the program: 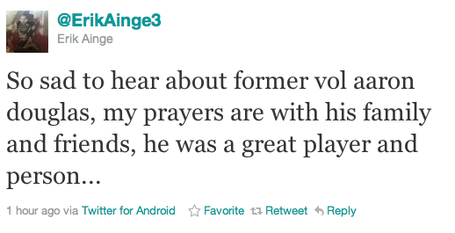 Inky Johnson, also a former Tennessee player, served as a defensive assistant during Douglas' one season as a starter with the Vols:

Lane Kiffin, who coached Douglas during that 2009 campaign:

And Greg McElroy, himself off to the Jets just this month: