Optimists, Pessimists, And The Washington Huskies

Washington rose from 0-12 to bowl victory in just two seasons. Can they keep up their momentum in a post-Jake Locker world?

Share All sharing options for: Optimists, Pessimists, And The Washington Huskies

In reviewing teams from worst to first (according to Four-Year F/+ averages) in this Summer Vacation series, it's been interesting to see certain themes emerge.  One theme is the one-time power who, after a bad hire or two, has lost its way and started over.  Colorado, Syracuse, Minnesota and Washington (and to a lesser extent, Kansas State) all fit this description; though the Buffs and Gophers are in Year One of their respective reclamation projects, Syracuse and Washington got head starts.  Both are in Year Three, and both achieved a level of success that was, from a statistical point of view, a bit unexpected in Year Two.

Oh, how far Washington had fallen. Syracuse and Colorado both hit 2-10 at their respective nadirs, Minnesota 1-11.  But Ty Willingham's Huskies pulled off the goose egg, 0-12, in 2008; that season, they fielded the fourth-worst BCS conference team of the last six years, ahead of just 2005 Duke, 2008 Washington State (who beat them in the Apple Cup) and 2009 Washington State.  For their level of recruiting (only once between 2002-08 did the Huskies' recruiting class rank outside the Rivals.com Top 40), this was completely inexplicable and, in the case of Willingham's employment, unforgivable.

Though they probably weren't quite as good as their record indicated in 2010, the Huskies have made major strides in two years under Steve Sarkisian.  That they were playing in a bowl game just two years after 0-12 was impressive enough; that they humbled Nebraska in the Holiday Bowl was even more gratifying.

What happens now that the face of their program -- the one Washington player everybody in the country could name -- is now preparing for life as a Tennessee Titan (assuming there's a National Football League ever again)?  After the expected blip in 2009, recruiting has once again picked up steam under Sarkisian; plus, some interesting skill position players return.  But with quite a bit of youth on display in 2011, can Washington keep pushing forward without at least a temporary misstep?

I've said many times that improvement is not typically linear.  It typically comes in the form of two steps forward, one step back.  Tell that to a Washington offense that took a good, solid five consecutive steps forward to finish the 2010 season after a four-game bottoming-out process.  The Huskies stood at 3-6 after losing three consecutive games by a combined 138-30 score, but they rallied, whipping UCLA at home and beating California and Washington State on the road to reach bowl eligibility.

It's easy, however, to see why stats may be a bit wary of the Huskies -- their seven wins came by an average of 8.9 points, while their six losses came by an average of 26.5.  Though they sneaked by USC and Oregon State in early-October, they only played well enough to beat an average opponent (with an average number of turnovers and bounces) once in the first nine games of the year.  That said, their late-season improvement was steady and impressive, and we have learned that such improvement could indeed be a sign of good things to come.  A great bowl game performance -- like what Washington unleashed on Nebraska -- is not, in and of itself, an indicator of anything positive, but a multi-game hot streak is a different story. 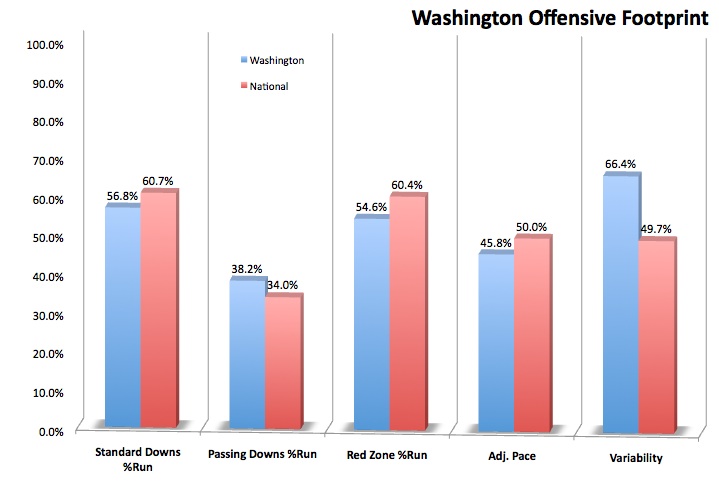 Thanks, basically, to Todd McShay overrating him this time last year, Jake Locker was very effective for what he was: a low-efficiency, big-play quarterback who lacked consistency but could unleash two or three drives of perfection every game.  You see his effect in the tables above -- aside from passing downs, Washington's explosiveness (PPP+) ratings were higher than their efficiency (Success Rate+) ratings almost across the board.  Locker completed just 55 percent of his passes for a humble 6.8 yards per pass, but Washington did still rank in the top 30 in both Rushing and Passing S&P+, and he did still get selected eighth overall in April's NFL Draft.

So now Locker's gone.  He's been around so long that it's hard to imagine Washington's offense in his absence.  Will new quarterback Keith Price (who held off redshirt freshman Nick "Yes, That Montana" Montana this spring) change the offense's personality (high-volume passing on standard downs, high-volume rushing on passing downs, medium pace, high variability) much, or does this footprint accurately depict Sarkisian's modus operandi?

Price threw for 164 yards in one start and mop-up time as a redshirt freshman last season; the staff kept things simple and conservative in his thrown-into-the-deep-end start against Oregon -- he completed 14 of 28 passes (four completions to running backs for six yards) at 4.5 yards per pass.  This probably doesn't drop too many hints as to how the offense will look when molded around him, but I do expect the Huskies to be perhaps a bit more conservative, at least early in the year.  Two decent rushing-and-receiving threats in second-team all-conference back Chris Polk (1,415 rushing yards, 5.4 per carry, -0.8 Adj. POE, 9 TD; 180 receiving yards) and Jesse Callier (433 yards, 5.6 per carry, -1.7 Adj. POE; 98 receiving yards) should be leaned on in the opening games. Price certainly looked strong in the spring game (20-for-28 passing for 212 yards, 7.6 yards/pass, 3 TD, 0 INT), but ... that was the spring game. 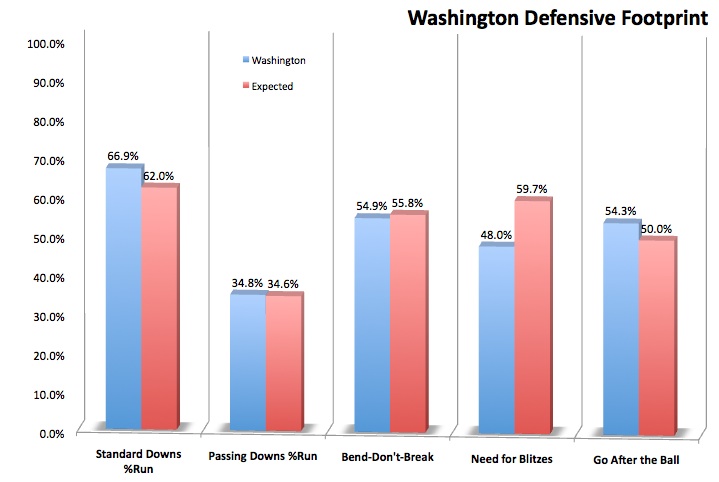 Here's where stats can confuse you and generalizations can backfire.  Washington's defensive line ranked 36th in Adj. Line Yards, so their overall Rushing S&P+ rank of 82nd suggests an iffy-at-best linebacking corps.  Plus, Washington's Need For Blitzes figure was relatively low, suggesting the defensive line was generating a good portion of the Huskies' pass rush. Except ... outside linebackers Victor Aiyewa and Mason Foster combined for 203.0 tackles, a monstrous 35.0 TFL/sacks, and six forced fumbles.  Nobody on the line had more than 8.0 TFL/sacks.

Generalizations are just that -- generalizations -- but no matter who was responsible, Washington's strengths and weaknesses were obvious: they were okay against the pass but couldn't stop the run.  Opponents knew it, rushing quite a bit more than average on standard downs, and while the pass defense was far from spectacular, the Run D was still quite a bit worse.  The Huskies also couldn't stop anybody in the redzone, but that wouldn't have been too much of a problem if a sieve of a run defense didn't let so many teams into the redzone at times.

For 2011, Washington's strengths could get stronger and their weaknesses weaker.  Both Foster and Aiyewa are gone, leaving a gap in the front seven's play-making potential, but the secondary returns three of four starters, including a pair of interesting cornerbacks, Desmond Trufant (41.0 tackles, 1.5 TFL/sacks, 1 INT, 1 FF, 4 PBU) and Quinton Richardson (33.0 tackles, 2.0 TFL/sacks, 2 INT, 1 FF, 8 PBU).

(By the way, how in the world did Aiyewa only end up honorable-mention all-conference?  The dude had 22.5 TFL/sacks!)

Because of their Holiday Bowl greatness, and because I'm pretty sure I somehow haven't passed along a My Morning Jacket song yet, how about we set that Huskies highlight video up with some "One Big Holiday"? 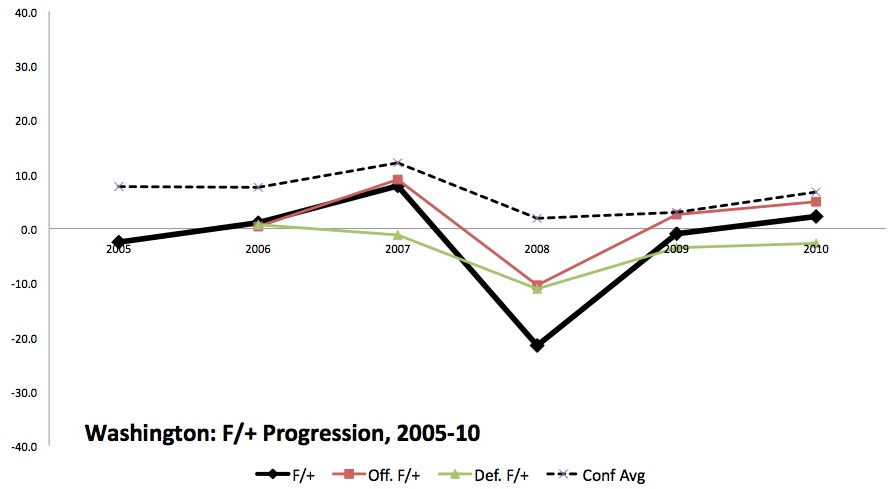 It's time for another game of Are You An Optimist Or A Pessimist?

What pessimists see: a team that has risen a bit too quickly in two years and had very little margin for error in terms of reaching a bowl last season.  The Huskies were outscored by almost 100 points last year, and they lose both the face of their offense and perhaps their three best defensive play-makers in Aiyewa, Foster and safety Nate Williams. Plus, there are a ton of freshmen, redshirt freshmen and sophomores on the two-deep.

What optimists see: a team whose YPP margin suggests the blowouts were somewhat fluky, a team whose turnover margin was dinged significantly by an unlucky number of fumble recoveries, and a team with downright solid recruiting rankings (those freshmen and sophomores are on the depth chart for a reason -- they're good).

People will be paying a lot of attention to the travails of Nick Price in replacing Jake Locker, but Washington's 2011 fate will likely be decided by the Huskies' overall youth.  If Seferian-Jenkins, Price, and a host of young offensive linemen, receivers and outside linebackers can be trusted enough to run what Washington coaches want to run, then the ceiling is pretty high.  But the best odds are on Washington hovering around .500 in 2011 while putting together serious potential for 2012 and beyond.