One-year glitch or New Washington State? Examining the Kansas Jayhawks as they attempt to rebound from a swift, stunning collapse.

Share All sharing options for: 2011 Season Preview: The Kansas Jayhawks And Unintended Schadenfreude

This one is a bit awkward.  It's relatively common knowledge that I am a Missouri fan and, therefore, legally required to dislike and root against the Kansas Jayhawks at all times.  I like to think the following piece about the dreadful state of the Kansas Jayhawks football program is neutral and unbiased ... but I also know it's going to sound like a Missouri fan doing a bit of reveling.

Such is the nature of writing for SB Nation. Even when we put our loyalties aside, everybody still knows our loyalties. Just realize that the numbers have no loyalty -- when our Football Outsiders Almanac 2010 projections had Kansas going a surprising 7-5 last year (yeah, I think we missed that one), I went on my friend Jesse Newell's podcast and dutifully talked the Jayhawks up. Now, I get to go the other direction. Because there's no talking up the product Turner Gill put on the field in his first season.

When he was head coach of the Buffalo Bulls, Gill was known for milking every last ounce of talent out of his players, teaching conservative, fundamental football.  His teams forced fumbles, created breaks for themselves, and won a surprising MAC title in 2008.  It was easy to look at his profile and think, "Just imagine what he could do with a higher level of talent!"  Well, when he took the Kansas job last winter, he inherited a squad that seemed to have, by far, less talent than most of the rest of the conference.  They had a decent young back that wasn't as good as everybody else's decent young backs.  They had a couple of solid linebackers who weren't as good as everybody else's.  Their offensive line was decent but not good enough to account for the lack of skill position talent.

With a gap this large, Kansas needed to take risks to win with this level of talent, and that isn't entirely in Gill's nature.  The team was young enough that it isn't impossible to think things could improve when last year's freshmen are seniors, but it is nearly impossible to imagine the Jayhawks succeeding to much degree this coming fall.  According to F/+ rankings, Kansas ranked dead last among BCS conference teams last year.  Ask Washington State or Duke how long it takes to build from that.

Once again, the national average for points scored was around 27.2.  The Kansas offense played at an above-average level twice: once against New Mexico State and once in an out-of-nowhere fourth-quarter surge against Colorado.  Meanwhile, the defense crossed the "average" threshold just once, against Nebraska.  Few teams put together such a combination of poor offense and defense, though it is easy to think that one unit's hopelessness may have fed into the other's.  There was certainly some sort of negative vibe that built as the season progressed -- Kansas ranks 41st in five-year recruiting average, so simply writing off their terrible season as being 100% due to poor talent is probably missing the boat.

Or did Todd Reesing and company make that much of a difference? 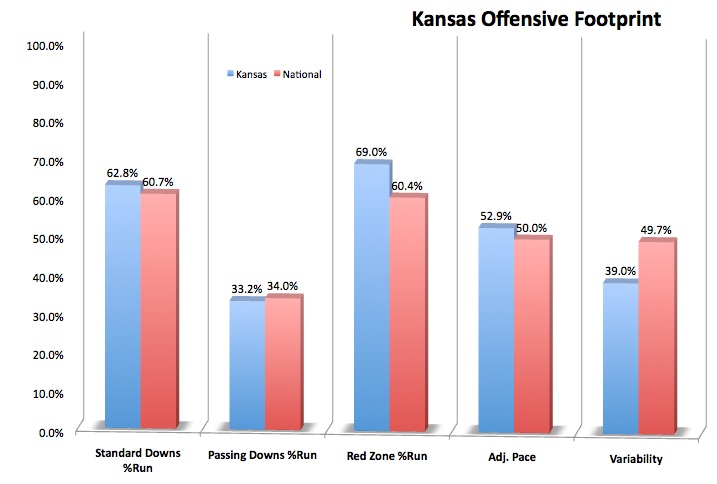 How much of an impact can three or four skill position players make for an offense?  For the 2007-09 seasons, Kansas' offense was driven by quarterback Todd Reesing and receivers Dezmon Briscoe and Kerry Meier (and, to a lesser extent, running back Jake Sharp).  One had to figure that their departures would result in a step backwards for the 2011 Kansas offense, but not a Wile E. Coyote cliff dive.  But in moving from Reesing to the trifecta of Jordan Webb, Quinn Mecham and (briefly) Kale Pick ... in moving from Briscoe and Meier to Daymond Patterson (487 yards, 5.3 per target) and Bradley McDougald (240 yards) ... in moving from Sharp to a youth-heavy rotation of James Sims (742 yards, -1.4 Adj. POE) and Deshaun Sands (211 yards, -7.2 Adj. POE) ... and in moving from Mark Mangino and company to Gill and offensive coordinator Chuck Long ... the offense completely fell apart.

The last time there was a fall this precipitous, it was after Washington State changed coaches between 2007 and 2008. Suffice it to say, Wazzu did not quickly bounce back.  In fact, two years after their plummet, they made great progress just to get some of their offensive rankings back into the 80s.  This was a nearly unprecedented collapse, and the precedent that does exist should be terrifying for Kansas fans.

The Jayhawks tried desperately to establish the run in 2010 (the low variability and higher-than-normal Run% on standard downs -- despite the fact that a lot of those standard downs came in blowouts -- reveals their mindset), but they just couldn't.  There is hope in the fact that Sims was at least somewhere close to average as a freshman and could grow into something more, but he still lacked in the explosiveness category; still, if Kansas is to over-achieve in 2011, however, either he or incoming freshman Darrian Miller will likely be the reason. 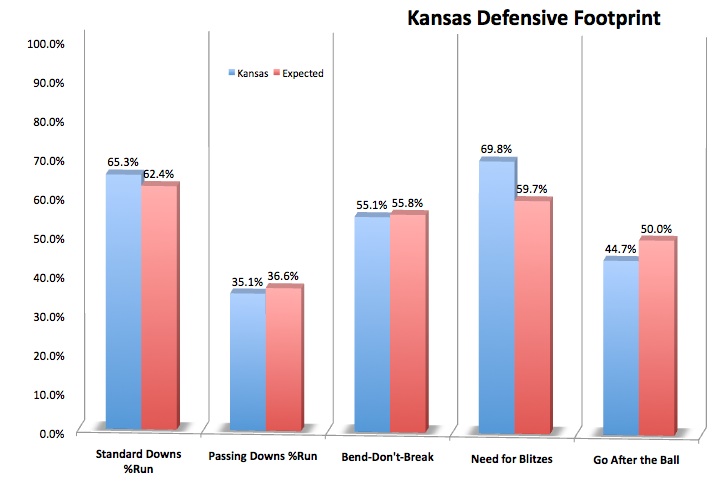 Turner Gill is a somewhat conservative coach, something that is reflected in the fact that Kansas' defense was better (relatively speaking) at preventing explosiveness (PPP+) than efficiency (Success Rate+); you can either load up and attempt to force the action, or you can live to fight another down and hope the other team eventually makes a mistake. Kansas definitely attempted the latter in 2010, either because they wanted to or because their personnel left them no choice. Either way, you can win games with a conservative, somewhat bend-don't-break approach if you have at least middling talent.

When you are taking the job at a school that has historically been an underdog in its conference, however, you probably cannot afford to go conservative with your choice of defensive coordinator.  That's exactly what Gill did in hiring Carl Torbush, presumably for his "experience."  He's been defensive coordinator for Dan Mullen at Mississippi State (2008), Dennis Franchione at Texas A&M (2003-05) and Alabama (2001-02), Mack Brown at North Carolina (1988-97) and Billy Brewer at Ole Miss (1983-86), but it's been a while since he was at the helm of a truly solid BCS conference defense -- Mississippi State improved significantly upon his departure, and he was fired at A&M. He had no idea what buttons to push last year (not that anybody else would have either), and in taking few risks, he and Gill left Kansas almost no chance to succeed through underdog strategies.

(I'm far from impressed with Chuck Long for similar reasons.)

Regardless, Torbush is still in Lawrence and will be this fall.  And the cast of characters with whom he has to work does not look all that different than it did last year.  Defensive end Jake Laptad (30.0 tackles, 8.5 TFL/sacks, 3 FF) was around forever and probably qualified as KU's best playmaker; both he and linebacker Justin Springer (61.5 tackles, 8.0 TFL/sacks) are gone. So are defensive backs like 2007 contributor Chris Harris (67.5 tackles, 5.5 TFL/sacks) and safety Olaitan Oguntodu (45.0 tackles, 2 PBU). Typically, losing contributors from a poor defense does make that much of a difference, but Laptad, Springer and Harris were still potentially Kansas' most explosive players along with linebacker Steven Johnson (78.5 tackles, 4.5 TFL/sacks) and nickel back Tyler Patmon (34.0 tackles, 5.5 TFL/sacks, 2 INT, 10 PBU).

I was going to say Kanye's "See You In My Nightmares" for obvious reasons, but really, that isn't nearly depressing enough. I recommend just searching for 2010 Kansas Football on YouTube with either your favorite Neutral Milk Hotel or Elliot Smith album on in the background. That should convey the mood nicely. 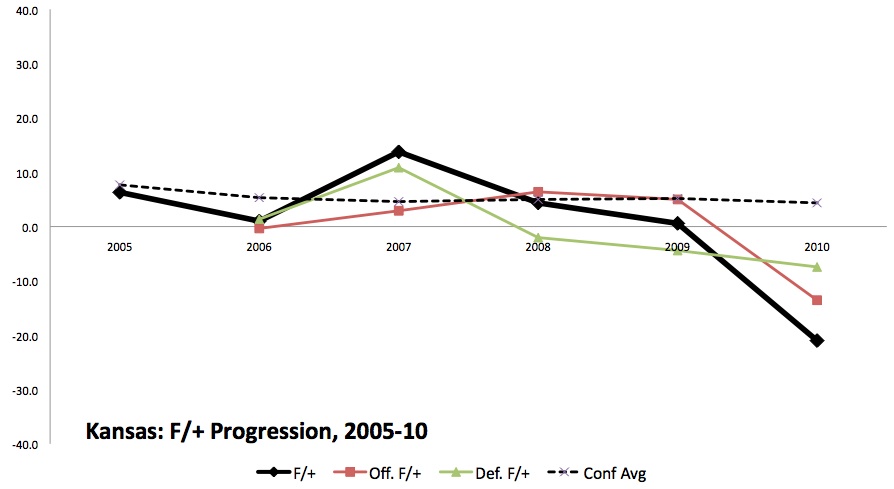 Kansas had a little bit of bad fumble luck, and their YPP margin suggests they were rather unlucky there too.  They return a lot of starters, and their five-year recruiting rank is decent.  All of these signs point to improvement in 2011.

But how much?  The 2010 Jayhawks were the worst Big 12 team of the last six years -- their minus-21.0% F/+ rating was significantly worse than that of the second-worst team of that span, 2008 Iowa State (-14.9%) -- and they ranked 32 spots worse than the second-worst Big 12 team (again, Iowa State) last fall.  Because of their great 2007 season, their four-year history is not terrible, and initial Football Outsiders Almanac 2011 projections have them battling it out with ISU for last place instead of finishing a distant last.

But that Washington State specter looms.  Teams don't collapse out of nowhere like this and immediately rebound with much velocity.  While Gill figures out what he has (and preferably begins to think about a new pair of coordinators with an actual underdog mentality), it's not hard to see Kansas improving a bit and at least showing occasional saltiness in the fall; but it's also not hard to see the Jayhawks bottoming out.  Kansas fans should look for individual progress from some of the youngsters -- Webb at quarterback, Sims, Sands and Miller at running back, et cetera -- in the hopes of building for 2012-13, but 2011 is most likely not going to be too pleasant an experience in Lawrence, especially not with their most winnable conference game (Iowa State) coming on the road.