Injuries wreaked havoc with what was already a rather young Purdue squad. Two questions: 1) How far can a healthy Boilers squad bounce back, and 2) Did this vengeful sports god think Robbie Hummel was a football player or something?

Share All sharing options for: 2011 Season Preview: Sold Souls And The Purdue Boilermakers

At Missouri, we used to joke that Dan Devine had sold Mizzou's soul for the 1960 national title.  This niftily explained all of 1980s and 1990s misfortune -- the Fifth Down, the Flea Kicker, signing the No. 1 running back in the country in 1986 and watching him destroy his knee in a high school all-star game, et cetera.  (This would also prove that the sports god is incredibly sadistic; Mizzou finished "undefeated" in 1960 but failed to win the title because they "lost" to a Kansas team that used an ineligible player and later had to forfeit the win. But that's another story for another time.)

As far as you know, I don't really believe in sports gods, sold souls and the like, but ... clearly Joe Tiller sold Purdue's soul for that 2000 Rose Bowl bid.  How else do you explain Purdue's amazingly bad recent injury luck?

Things got comical in 2010 -- Purdue's starting quarterback played barely over three games before being lost for the season.  The backup got hurt as well.  Their most frequently-targeted receiver lasted less than two.  Their starting running back?  Zero.  All of them were lost to knee injuries, and almost directly as a result, Purdue's offense was absolutely, positively dreadful over the final two months of the 2010 season.  It's hard to actually figure out what the Boilers are capable of in 2011 because what they produced in 2010 was so different than what they might have produced in an alternate universe where they don't go through skill position players like Pez or Spinal Tap drummers.  I'm just amazed that Robbie Hummel doesn't play football.

Through the last few years, Purdue has basically achieved directly where its recruiting averages would predict despite the added degree of injury difficulty.  Clearly their ceiling could be higher with some degree of health, but how much higher?  And is assuming health a giant waste of time since it's just never going to happen? 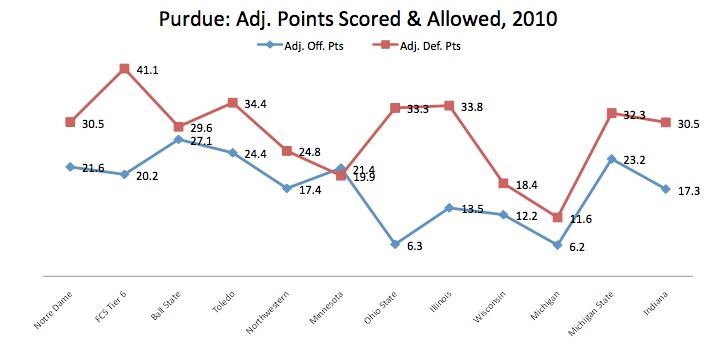 It began simply enough.  Miami transfer Robert Marve began the year as Purdue's first-string quarterback ahead of Caleb TerBush.  TerBush was ruled academically ineligible, and Marve led the Boilers to a 2-1 record with okay-looking wins over Western Illinois and Ball State.  Early in the fourth game against Toledo, Marve went down with a season-ending knee injury, and redshirt freshman Rob Henry, the third-stringer in August, took a majority of the snaps the rest of the way. After a loss to Toledo, Henry engineered a fourth-quarter comeback against Northwestern and led the Boilers to an 11-point win over Minnesota (the only time all season they played well enough to score an Adj. Win).  The Boilers stood at a semi-surprising 4-2, and Henry looked like the quarterback of the future.

Then the bottom completely dropped out.  Henry lost a fingernail against Ohio State (an injury that is so painful, and so hilarious in a Crazy Old Testament God kind of way ... at least give him a high ankle sprain or something) and briefly gave way to freshman Sean Robinson, who was simply not ready.  Robinson completed 13 of 30 passes for all of 82 yards in bludgeonings at the hands of Ohio State and Illinois before improving ever so slightly against Wisconsin and Michigan.  Henry came back in the final two games of the season and did just well enough to break hearts with a couple of untimely interceptions.

Or to put it another way...

To be sure, Purdue's Adj. PPG averages were rather dreadful even without Robinson throwing passes for four games ... but those were four incredibly awful games. 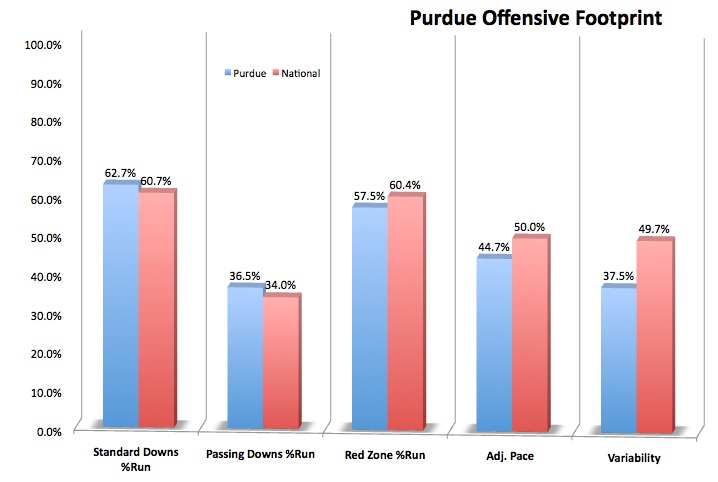 In 2009, Purdue passed 51.1% of the time on standard downs and 29.4% of the time on passing downs.  With Marve behind center for three games in 2010, it was 55.6% on standard downs and 38.5% on passing downs.  So Purdue's full-season splits above might not in any way reflect what Danny Hope and offensive coordinator Gary Nord intended to do at the beginning of the season.  They worked with what they had to work with; they tried to protect Henry on standard downs (it didn't really work, of course, as the running game wasn't very good), then had him roll out and attempt to create something on passing downs.  At the end of the season, he had compiled 996 passing yards (53% completion, 6.1 per pass, 8 TD, 7 INT) and 547 rushing yards (+2.3 Adj. POE).  (Robinson finished with 301 yards, two touchdowns and six interceptions, for what that's worth to you.)

So now it's 2011.  Marve is working his way back toward 100% health, Henry and Robinson are back, and TerBush is apparently eligible as well.  This should be enough quarterbacks to at least get Purdue through non-conference play before they have to skim the walk-ons pool.  The gameplan could be different depending on who wins the job -- with Marve, there would be more short passing involved; with TerBush, more of a tradition pocket attack.  Early money is on Henry, but ... we'll see who is actually in uniform when Middle Tennessee comes to town to start the season, huh? 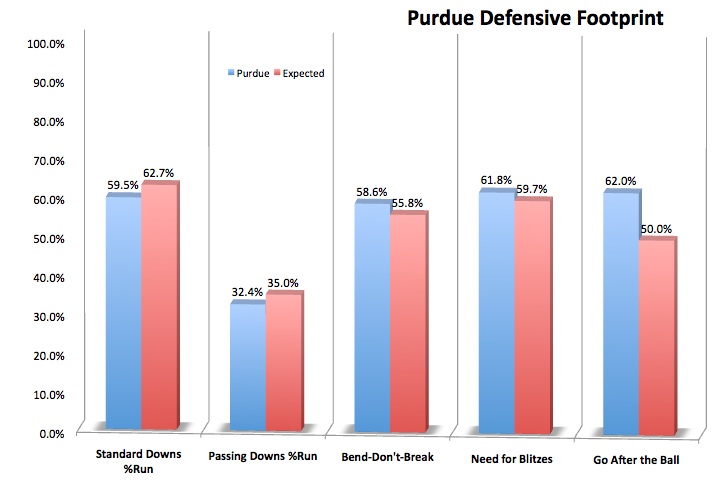 That's what I thought.  In 2011, we will learn just how much of a difference a single, nearly transcendent defensive end can make for a defense.  Purdue's line stats were outstanding, and I don't think it was just because of Kerrigan and his hilarious stats (60.0 tackles, 26.0 TFL/sacks, 5 FF, 2 FR).  Tackle Kawann Short was also very good (though he could have benefited from teams doubling Kerrigan), and players like Bruce Gaston (4.5 TFL/sacks) and Gerald Gooden (4.0 TFL/sacks, 2 FF) had their moments.  They bought time for a young back seven, and that development might pay off this year.  The line obviously won't be as good without Kerrigan, but the rest of the defense returns almost entirely intact.

Beyond Kerrigan, perhaps the most impressive part of Purdue's defense in 2010 was the play of the safeties and the corners in preventing big plays.  They had quite a bit of "bend-don't-break" going on and allowed significant cushions to opposing receivers -- perhaps because they were breaking in an entirely new starting secondary after losing four starters from the 2009 squad -- but they made the tackles they needed to make a reasonable amount of the time.  Cornerback Ricardo Allen was well-rounded (3.5 TFL/sacks, 3 INT, 4 PBU) for a freshman, though obviously 64.5 tackles are more than you'd like to see from a corner (I'm not the only one who likes Allen); Allen, Josh Johnson and Charlton Williams give the Boilers secondary depth, as do safeties Logan Link and Albert Evans, who weren't extreme playmakers but did make plenty of "last line of defense" tackles.

As a whole, opposing offenses picked up on the cushions Purdue was allowing and did a lot of quick passing on standard downs, not only because it was available, but also because it probably kept Kerrigan off their backs a bit.  It will be interesting to see how opponents' approaches might change without Kerrigan causing night sweats. 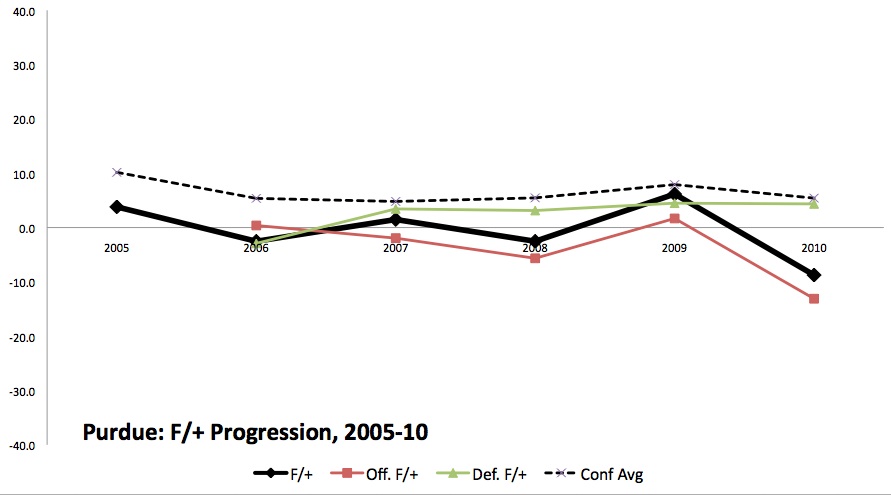 At Football Outsiders, we don't yet have a way to capture the number of games lost to injuries, but until proven otherwise, I'm just going to assume Purdue was the national leader in the category.  A program that had reliably fluctuated on either side of the F/+ Mendoza line (+0.0) suddenly collapsed under the weight of their M*A*S*H unit.  In and of itself, that suggests Purdue could rebound quite a bit since no one gets obliterated by injuries (of both the silly and less than silly variety) every year, right?

Leaving injuries aside, the Boilers return a healthy number of starters, and their YPP margin and Adj. TO Margin both suggest that they were unlucky in this regard (okay, in every regard) last year. If the COTG is done messing with Boiler fans, Purdue could be well positioned (in other words, they're semi-experienced and in possession of a rather easy schedule) to at least return to bowl eligibility in 2011.  The quarterback race and its implications will be interesting to watch, but if a better line and a healthy Ralph Bolden can actually establish a decent running game, that will make life easier for whoever wins the job.  I expect a more aggressive secondary to somewhat counteract a line that loses mighty Ryan Kerrigan, and Purdue's success should, in the end, be decided by both the health and effectiveness of the offense and the coaches' ability to actually get to know their personnel and gameplan accordingly.