Your Son And The Iowa State Cyclones

Paul Rhoads is exactly the kind of coach you would want leading your own son. But he'll need a few more athletes to take Iowa State from giant killer to just giant.

Share All sharing options for: Your Son And The Iowa State Cyclones

Rhoads' Iowa State teams are salty and opportunistic.  They do everything an underdog has to do to succeed in a major conference -- they convert any and all redzone opportunities, they force fumbles, and they prevent big plays -- and each season they claim a new scalp.  First, it was Nebraska in Lincoln in 2009; then, Texas in Austin in 2010.  (Yes, eight turnovers in Lincoln ... and yes, 5-7 Texas ... context, schmontext.)  Rhoads is energetic, skilled and, yes, so proud to be your coach.  The one thing he hasn't proven to be yet, of course, is a coach who can bring enough talent to Ames to transform Iowa State from giant killer to giant.

On paper, the 2011 Iowa State Cyclones look a lot like those from 2009 and 2010.  With the lowest five-year recruiting average in the Big 12, will his teams actually look any different on the field?  And if he keeps claiming scalps and occasionally reaching six or seven wins, will it matter?  They've won more than seven games in a season just once since Earle Bruce left Ames for Columbus in 1978, and just five times in their history.  What are Cyclones fans' expectations, and can Rhoads meet them over the long haul?

Better question: how long until this oddly attractive, completely out-of-place monstrosity is blown over?  Have you ever been to Jack Trice Stadium?  Straight-up wind tunnel.

We often make the mistake of using short-term results to make long-term predictions.  In Rhoads first season in 2009, Iowa State made modest, encouraging improvements -- from 108th to 82nd in overall F/+, from 97th to 52nd in Off. S&P+ -- but they won a little too much, too early.  They forced an unsustainable 20 fumbles, and opponents laid another 12 fumbles on the ground completely umprompted (some occurrences were more amusing than others), and it allowed the Cyclones to go 3-2 in games decided by touchdown or less and 7-6 overall despite, again, only ranking 82nd in terms of overall performance.  This left some with the impression that Iowa State would always force this number of fumbles and pull out close games, and that they were dangerous in the Big 12 North (way back yonder when there was such a thing).  Not so much.

Instead, Iowa State basically held steady in 2010, ranking 81st overall and watching their offense regress and their defense improve.  This, in and of itself, is somewhat impressive; typically, when a team makes a healthy jump in the ratings one year, they regress a little the next.  For the Cyclones, the regression came on the scoreboard.  They went 1-2 in close games in a year when one game made the difference in bowl eligibility.  The offense was all over the map, and the defense suffered some serious mid-October cratering before rebounding to play well down the stretch. 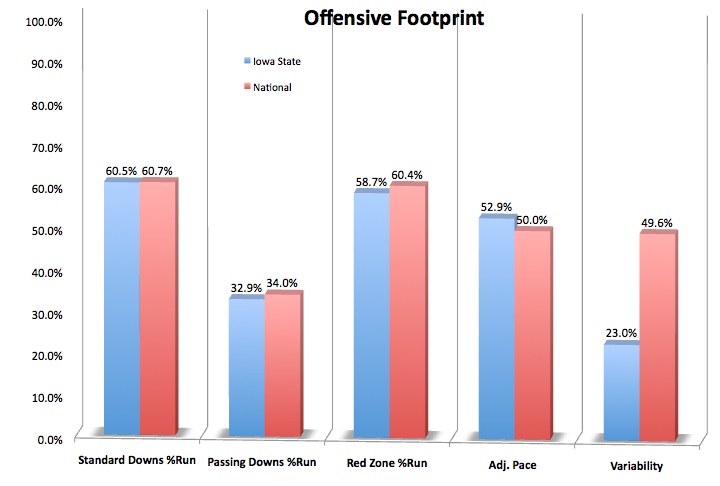 A decade ago in college (sigh), I attended a Bela Fleck & the Flecktones concert.  I was raving about Fleck's banjo-plucking abilities to a friend of mine, calling him "like, the best banjo player in the world or something."  (Sadly, that's still how I talk when I get excited.)  My friend paused, then said "How would that conversation with God go, exactly?  'Congratulations, I'm going to make you the best in the world at something.'  'YEAH!'  'Here's your banjo.'"

Congratulations, Iowa State, I'm going to make you one of the best in the country at something -- redzone offense!  One more thing: you're never going to actually get into the redzone.

Say this for Iowa State: they definitely knew how to take care of what few opportunities they had.  But that's kind of like hitting with RISP in baseball: it's a nice trait to have, but a) down the line, creating a ton of opportunities is more important than maximizing minimal opportunities, and b) if you're much better in the redzone than in the other 75-80 yards on the field, that might not be sustainable.

Surveying the entire field, Iowa State left something to be desired, particularly in one overriding category: explosiveness.  Specifically, the Cyclones had none.  In the five major sub-categories of PPP+ above (overall, rushing, passing, standard downs and passing downs), ISU ranked no better than 68th in the country.  They had a semi-efficient running game, but while "three rushes for 12 yards" might lead you to a nice success rate, it is very difficult to maintain length-of-the-field drives like that.  You need big plays, and ISU didn't get any. 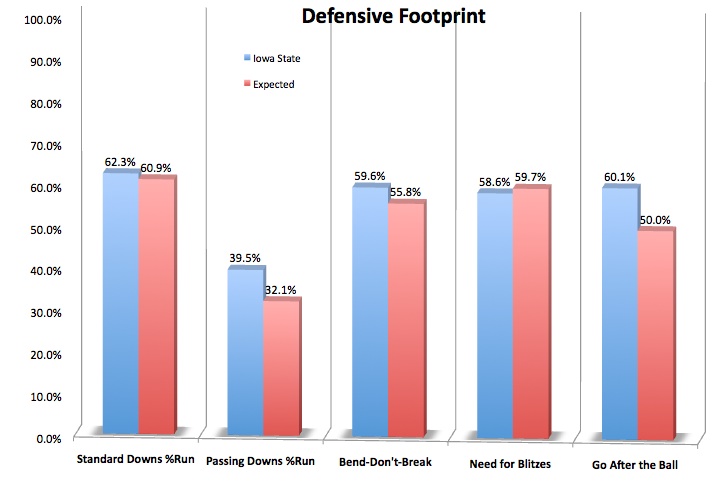 Under Rhoads, Iowa State has lived (and occasionally died) by the bend-don't-break credo.  Live to fight another down and hope to force a fumble.  In two years, the Cyclones have forced 36 fumbles in 25 games, ranking third in the category in 2009 and 20th in 2010.  Granted, in the meantime, they've also had one of the least-efficient defenses in the country, but forcing fumbles is Underdog Tactics 101 stuff, and ISU does it at as high a level as is maintainable from year to year.

Meanwhile, they make sure that while the ISU offense doesn't manage any big plays, the opposing offense doesn't either.  Rarely will you find a defense with differences this large between their Success Rate rankings and PPP+ rankings.  They will give you six yards on every snap, but they won't give you ten!  (That sounds a bit much like "Okay, you can rob my house, but you're not taking the coffee maker!"  But you get the point.)

Despite the lack of efficiency, the Cyclones' defense really did improve a solid amount last year, and they could be in line to do so again in 2011.  There is one concern, however: they lose a great deal of experience at the safety position -- strong safety David Sims and his 75.5 tackles are out the door, as are the 78.5 tackles of the Michael O'Connell/Zac Sandvig duo.  Typically I'd point out that most of this trio's tackles were of the downfield, "somebody had to make the tackle" variety, but when you rely so much on your ability to avoid big plays, losing your starting safeties is alarming.

If the safety situation is figured out, the front seven could be decent.  Linebackers Jake Knott and A.J. Klein (178.5 combined tackles, 14.0 TFL/sacks, 7 interceptions, 6 PBU's) were both tackling machines and playmakers, and there is depth on the line despite the losses of end Rashawn Parker and tackle Bailey Johnson.  Every time I watched Iowa State last year, I came away impressed with tackle Stephen Ruempolhamer (and not just because his name is Stephen Ruempolhamer).  Imagine my surprise, then, when his stats (23.0 tackles, 6.0 TFL/sacks) were not very good.  This speaks to the difficulty of evaluating defensive tackles.  Odds are, his best plays were the ones that opened up tackling lanes for Knott and Klein, not the ones in which he actually made the play himself .

It was long, arduous, and not always worth it, only with a couple of brilliant moments in the middle.  Sounds like every Funkadelic song over six minutes.  ("All Your Goodies Are Gone" and "I Got a Thing, You Got a Thing, Everybody's Got a Thing," to name two.  "Maggot Brain" does not apply because "Maggot Brain" is perfection. 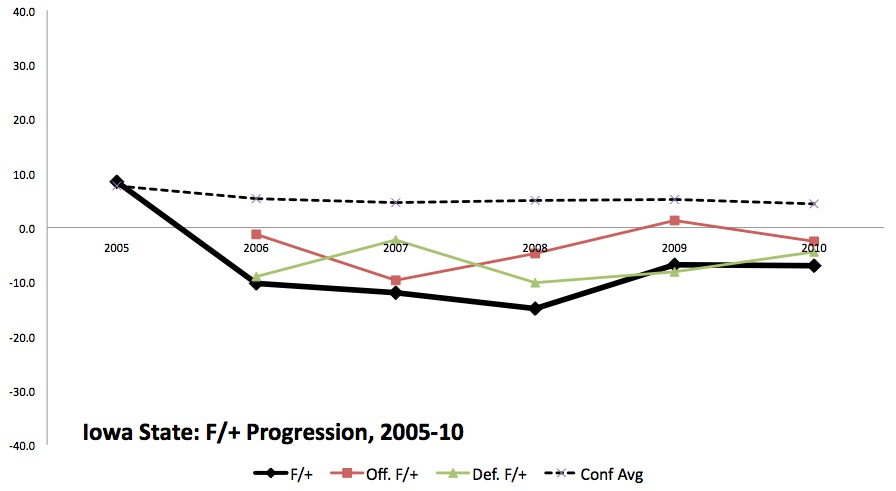 In his limited action, Jerome Tiller has shown decent ability when it comes to game-management -- knowing when to throw the ball away, knowing when not to take risks, knowing when to live to fight another down, etc.  When you've got a killer defense and big-play threats on offense, that's perfect.  However, ISU is going to need a quarterback who can create on his own, and I'm not sure Tiller has that in him, at least not over 60 minutes in at least six games.

ISU's schedule is brutal (11 BCS conference opponents, including trips to UConn, Missouri, Oklahoma, Kansas State and Texas Tech), and though their turnover margin seems somewhat sustainable and the team itself might be better than it was in the last year or two, six wins will be difficult to come by for Rhoads and ISU.  With Iowa, Texas, Texas A&M and Oklahoma State coming to Ames, there will be ample opportunity to pull another fun upset, but ... they'll have to pull more than one to get to their second bowl in three seasons.