Greg Schiano pulled a magic act in bringing sustained success to Rutgers, but in a zero-sum league, the Scarlet Knights have trended in the wrong direction recently. Can an experienced offense and a new offensive coordinator right the ship for Schiano? And what to make of a defense that couldn't stop the pass and now faces a stronger passing league?

Yesterday, we discussed a team that broke through to an unforeseen level in 2006 but have slid quite a bit in the last couple of years. Really, most of what I said yesterday about Wake Forest could be repeated about Rutgers today, only the god of bowl bids was at least kind enough to give Wake Forest a day in the BCS sun. Rutgers was much, much better than Wake in 2006, but all they got out of the experience was the opportunity to ravage Kansas State in the Texas Bowl and finish 11-2. That season was a high point for the Big East conference as a whole, and while the Big East has decelerated a bit each season, Rutgers' descent has been much more stark the last two years.

The warning signs were there a year earlier than the results, actually. In 2009, the Scarlet Knights managed to go 9-4 for the second consecutive season, but their F/+ rating fell from +10.3% (26th) in 2008 to -2.1% (64th). They got by with smoke, mirrors and two FCS opponents, but with a further youth movement and an offensive coordinator who didn't necessarily match the personnel at hand, there was no skating by unnoticed in 2010. Rutgers fell to 84th in the F/+ rankings, and this time their record caught up -- they went 4-8, their worst record since 2004.

In an effort to shake things up and/or breathe new life into a stagnant program (pick your cliche), head coach Greg Schiano has brought in a new offensive coordinator: Frank Cignetti, who was last seen calling plays for Dave Wannstedt at Pittsburgh. Cignetti certainly knows the Big East, and his Pitt offenses were typically rather stellar and underrated, but whether he's a good fit for RU's strangely unique personnel remains to be seen.

This season is a bit of a crossroads for Schiano and Rutgers. He should always be appreciated for the job he did in raising the program from the dead -- he delivered four straight seasons of eight wins or more after 25 years without even one -- but whether he has forever peaked or has some more magic left in him, there's a decent chance we begin to find out in 2011. 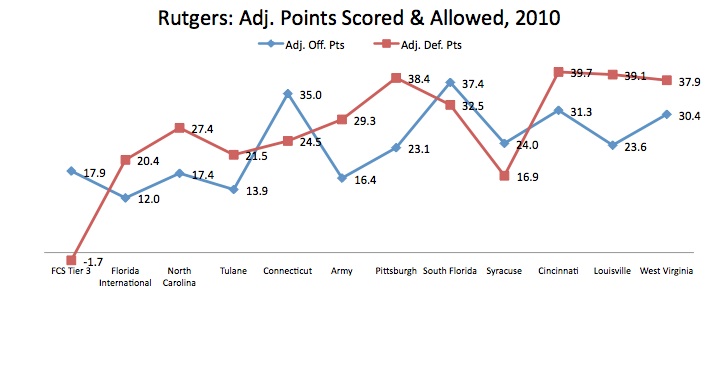 Two things jump out in the graph above: 1) the offense was not good but trended toward improvement as the season progressed, and 2) the defense trended toward steady regression in their worst season in a long time. Schiano addressed ongoing offensive issues, but there should plenty of concern reserved for the defense too.

It seemed for a while as if Rutgers was going to get away with it again -- they began 4-2, suffering an egregious loss to Tulane but looking like they still might be able to figure out how to get to six wins. Alas, it was not to be. Their win over Army was the last they would procure; they lost two tight games to South Florida and Syracuse, then completely fell apart, losing to Cincinnati, Louisville and West Virginia by an average of 26 points.

If we're spinning this positively, we say that means there's plenty of room for growth. And hey, the offense did at least incrementally improve as freshman quarterback Chas Dodd got his sea legs.

As mentioned, the defense got worse at the same time, but with almost everybody returning on the offensive side of the ball, Cignetti has some interesting parts with which to work. 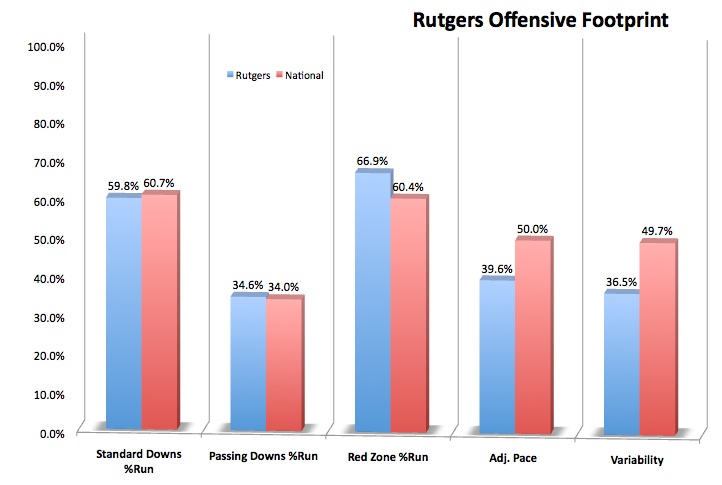 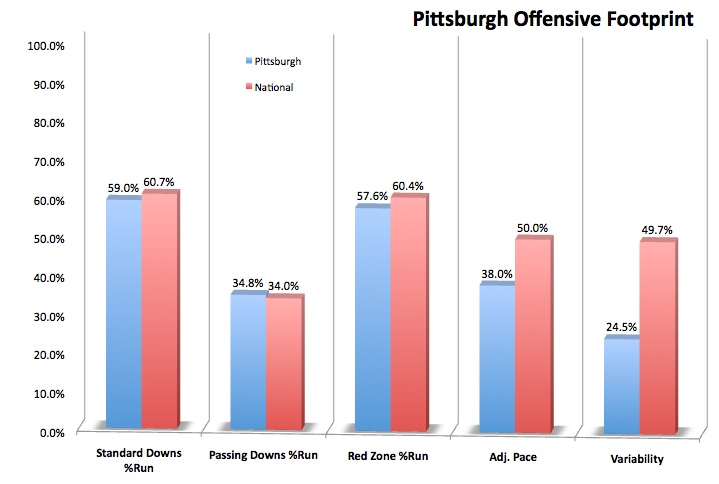 Pitt used almost identical run-pass ratios (Rutgers ran more in the red zone) and played at almost exactly the same tempo. The only real difference is that Rutgers' Variability was much higher, meaning they adjusted the game plan quite a bit based on score, down-and-distance, field position, etc. As I've mentioned before, high variability does not automatically equate to poor offense, but I've seen Rutgers play quite a few times the last few years, and they constantly seemed to be suffering an identity crisis in 2009-10, never really understanding what they were or wanted to be. They attempted to install something of a spread offense last year, but it just never took. If Cignetti is capable of establishing an identity and committing to it, whatever it may be, chances are good that it will help this unit quite a bit.

Though they still employed fullbacks with good, northeastern, likely Italian names, Cignetti's Pittsburgh offenses threw a lot and attempted to keep defenses off-balance. In theory, a nice, even run-pass split could work well for the Scarlet Knights, as they have potential at each skill position. Dodd (1,637 yards, 7.3 per pass, 55% completion, 11 TD, 7 INT) took over when Savage got hurt and did just well enough to keep Savage on the sideline. (Savage announced he was transferring to Arizona after the season.) He threw downfield a lot, and that shouldn't change considering the weapons he will have lined up wide.

When I said above that Rutgers has strangely unique personnel, I was primarily talking about Mohamed Sanu and Jeremy Deering. Sanu has done just about everything but line up as right guard in his two seasons at RU. He finished last season with 418 receiving yards (9.5 per catch, 60% catch rate), 309 rushing yards (+7.6 Adj. POE) and 160 passing yards while splitting time between wideout and Wildcat formation quarterback. Meanwhile, Deering was basically used as Sanu's more hit-or-miss understudy, finishing with 352 rushing yards (4.6 per carry, +3.9 Adj. POE) and 338 receiving yards (21.3 per catch, 36% catch) as a freshman. Rutgers had other, more traditional targets as well -- Mark Harrison (829 yards, 18.8 per catch, 65% catch at 6-foot-3, 230 pounds) and quarterback-turned-tight-end D.C. Jefferson (166 yards, 16.6 per catch, 46% catch), to name two -- but Sanu and Deering were what made Rutgers unique, for better and for worse. Everybody mentioned here returns in 2011. 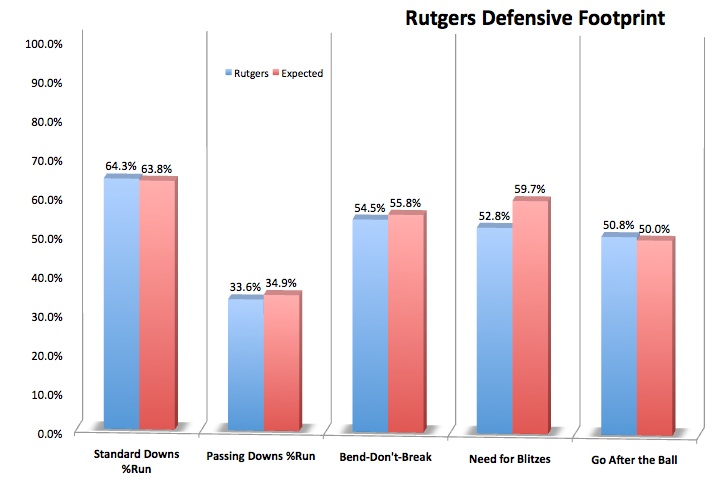 For the season as a whole, Rutgers' defense was less of a liability than its offense was, but as the offense got a bit more on track later in the year, the defense gave away any potential advantages. The Scarlet Knights ranked 108th in Passing S&P+ and 102nd in Adj. Sack Rate, which rather quickly pinpoints the primary issue. They gave up a few too many big plays on the ground, but the pass was the problem.

That being the case, let's just say it isn't particularly encouraging that RU loses its two best pass rushers, Alex Silvestro and Jonathan Freeny (combined TFL/sacks: 21.5), and half its starting secondary. The pass defense was bad with these players, so their absence might not make that much of a difference, but on first glance it is difficult to see what new contributors will emerge to replace Silvestro, Freeny, strong safety Joe Lefeged (65.0 tackles, 3.5 TFL/sacks, 4 FF, 6 PBU) or cornerback Brandon Bing (53.5 tackles, 3.5 TFl/sacks, 1 INT, 4 blocked kicks). The Knights did not play a ton of players last year, so there are few proven backups. Running backs Jordan Thomas and Mason Robinson switched from offense to defense this spring, suggesting the coaches didn't necessarily know where the replacements were going to come from either. Luckily, it appears that Robinson in particular could thrive in his new role.

What, did you think I was going to pass up an opportunity to dive into The Boss's catalog? 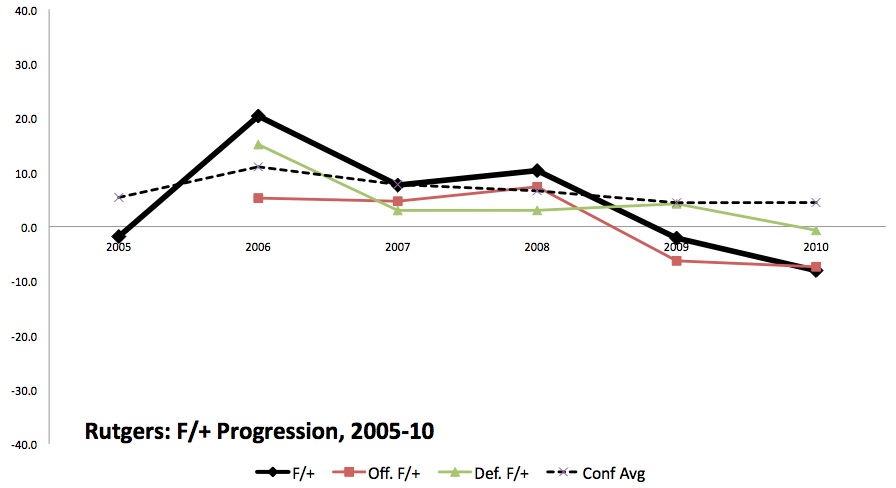 Let's play another game of Optimist Versus Pessimist!

What The Optimist Sees: A team whose recent history is much better than what they produced last year, a team whose offensive coordinator might be much more in tune to the talent at hand and has 10 returning starters at his disposal, and a team that plays in a conference won by the 55th-best team in the country last year. (In other words, a team that could win a lot of games if they recover to their recent levels.)

As a whole, Rutgers has gotten worse in three of the last four seasons, meaning their stumble to 4-8 is not an isolated incident. In fact, it wasn't even their biggest stumble in terms of overall quality -- that came the year before. If the Big East really is a zero-sum league (at least until TCU joins the mix), and Pittsburgh, West Virginia, Louisville, South Florida and Syracuse are all either getting better or likely to, then someone has to get worse, and recently that has been RU. If they are going to strike back, now's the time to start. I'm a fan of the underdog, so I have a bit of a sentimental attachment to a program like Rutgers that struggled for so long and found some sustained success, but I'm not particularly optimistic that they're going to find more sustained success. If they're going to prove me wrong, it begins in 2011.