Every year we hear that this might be the year that Notre Dame puts all the pieces together. Is this the year the cliche becomes reality?

We tend to see the same tidbits of conventional wisdom coalesce every season. Nebraska's back! Clemson's going to underachieve! This is the year Notre Dame turns the corner! Just look good, drop these statements (plus maybe an "Oversigning's bad!" or a "Players need to be compensated!") and get in line to back whoever this year's consensus breakthrough team is (this year: Texas A&M), and you can make yourself some money.

Some of the fun in being a numbers nerd is getting to disagree with much of the conventional wisdom that is out there. Nebraska played much closer to Football Outsiders' projections than that of the national consensus last year, just like Ole Miss did in 2009 and, I'm confident, Texas A&M will in 2011. But occasionally the numbers add up, and an overused bit of conventional wisdom actually begins to ring true (beyond Clemson's chronic underachieving, anyway). And in this case, 2011 really could be the year that Notre Dame breaks through. They're going to be damn good this year. Damn good. Just prepare yourself now. I'm not saying they'll be national title contenders (I haven't gone that far down the Holtzian path), but ... they could potentially win double-digit games against a strong schedule.

That's it. That's the entire intro. I just lost half of you anyway, right?

Brian Kelly's first year in South Bend started slow -- two tight losses led to a 1-3 start -- but the Irish won seven of nine to finish the season despite an injury at the quarterback position, and due to a rock solid schedule, their F/+ ratings were exceedingly positive.

Though the offense held mostly steady throughout the year, the defense took off, and down the stretch it was downright dominant.

The only time they gave up more than 14.3 Adj. Points in the last five games was against Miami in the Sun Bowl, and in that game they took a 30-3 lead before the Hurricanes got rolling. Theirs was potentially the best defense in the country after their humbling loss to Navy on October 23, and it is the primary basis for what will be some pretty strong College Football Almanac 2011 projections. Which is odd considering defense hasn't been the strongest feature for Kelly's teams in the past. So consider this a huge nod in the direction of defensive coordinator Bob Diaco, whose 3-4 alignment evidently fits the personnel very well. 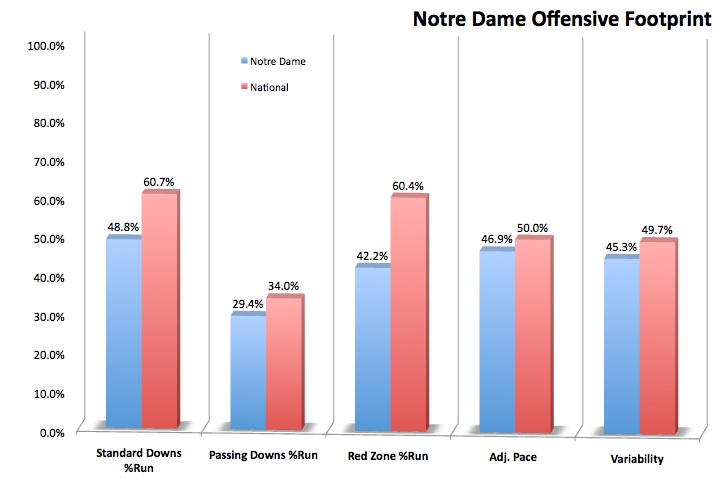 The Notre Dame offense featured the same kind of pass-first attack we've seen from Brian Kelly's offenses at previous stops, and it was reasonably effective. There was nothing great and nothing terrible about the Irish offense in 2010, though their overall success was dependent on their staying 'on schedule' and in standard downs. Both Dayne Crist and Tommy Rees were good-not-great, and neither were particularly effective on passing downs, but for most of the season, the offense at least didn't get in the defense's way.

It's obviously rather difficult to preview the Notre Dame offense when the single best offensive player is not guaranteed to actually play. Michael Floyd (1,025 yards, 13.0/catch, 61% catch, 12 TD), one of the more frequently-targeted receivers in the country, was suspended following a DUI arrest in March, and though I'd be willing to bet a large amount of money that he's available for most or all of the season  -- Kelly says he's in an 'all in or not' situation based on his ability to stay out of further trouble -- it's not guaranteed. With Floyd, Notre Dame has an explosive, if somewhat inefficient, pass-first offense. Without him, things might be alright, but it depends on the development of receivers like Tyler Eifert (352 yards, 13.0/catch, 66% catch, 2 TD), T.J. Jones (306 yards, 13.3/catch, 58% catch, 3 TD) and Robby Toma (187 yards, 13.4/catch, 78% catch in eight games). Theo Riddick (414 yards, 10.4/catch, 61% catch, 3 TD) is a nice efficiency option as well, but the ball flowed through Floyd last season, and his (unlikely) absence would hold back the offense at least a bit.

Obviously the other primary concern is the quarterback position. When Dayne Crist (2,033 yards, 6.9/pass, 59% completion, 15 TD, 7 INT) went down with a ruptured patella tendon (ever notice how much more awful injuries sound with the word "ruptured" involved, rather than "torn"? I guess "severed" would be even worse, but "ruptured" is awfully bad), Notre Dame was 4-4, but following an upset loss to Tulsa, Crist's replacement Tommy Rees (1,106 yards, 6.7/pass, 61% completion, 12 TD, 8 INT) won his final four games of the year, so he had the better season, right? Not necessarily.

Both hovered around the national average of 27.1, but taking opponent into account, the offense performed slightly better with Crist at the wheel. (This despite the fact that running back Cierre Wood began to thrive late in the season as well, further aiding Rees.)  The Irish very much won games with defense over their final third of the season, and while Rees didn't get in the way, Crist was the slightly more well-rounded option in terms of yards per pass, touchdowns-to-interceptions, and run threat (he's not exactly Tony Rice, but he had 165 pre-sack rushing yards). I assume the starting job will be Crist's when all is said and done, though Rees and evidently Everett Golson and Andrew Hendrix all still have a chance to sway the coaches. 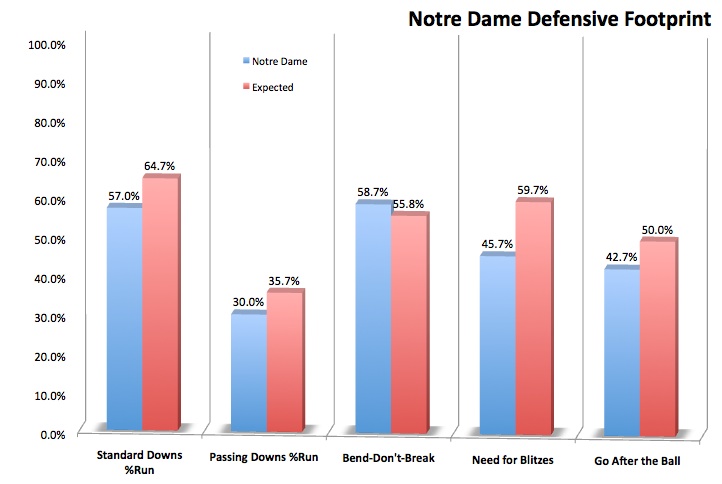 Offense is typically the strong suit for Brian Kelly teams, but they won with defense late in 2010. Bob Diaco's 3-4 defense almost had the statistical profile of a 4-2-5 -- not great in attacking situations, but reacting, swarming, and preventing big plays -- but they still featured two consistent statistical aspect of a 3-4: a) their "Need for Blitzes" was low because they were able to disguise their attacks and rack up similar sack numbers on both standard and passing downs, and b) a lot of players made a lot of tackles for loss.  Seven had at least 5.0 TFL/sacks, and all seven return in 2011.

Oddly enough, opponents chose to primarily pass against the Irish (this despite the fact that Notre Dame played run-heavy teams like Michigan, Army and Navy last year), which played right into their hands. Notre Dame's run defense was solid, but they thrived against the pass, particularly on standard downs. Harrison Smith (74.5 tackles, 0.5 TFL/sacks, 7 INT, 7 PBU) was one of the best safeties in college football; he was not used in any sort of attacking role, but he was the primary reason Notre Dame was a top five defense in terms of preventing big plays. He returns, as does almost everybody else of significance in the secondary -- cornerbacks Gary Gray (57.0 tackles, 5.0 TFL/sacks, 7 PBU) and Robert Blanton (40.5 tackles, 7.0 TFL/sacks, 2 INT, 5 PBU), and free safeties Zeke Motta (40.0 tackles, 1.5 TFL/sacks, 2 PBU) and Jamoris Slaughter (25.5 tackles, 3 PBU). I could have sworn Gray was a senior last year, but Notre Dame's website disagrees with me. Only cornerback Darrin Walls is gone from last year's unit.

If there is a concern for the Irish defense in 2011, it comes at defensive tackle. Ian Williams (27.5 tackles, 3.5 TFL/sacks) is gone, and though he missed time last year and was adequately replaced by Sean Cwynar (21.0 tackles, 3.0 TFL/sacks, 1 FF), depth could be a concern. It was perhaps a blessing that Cwynar missed a large portion of spring practices with an injury -- the coaching staff got a decent look at what I assume will be Cwynar's backups. Regardless, tackle was a surprising area of strength; this is often not the case when moving from a 4-3 to a 3-4, but both Notre Dame and Texas A&M dodged bullets in this regard last year.

In honor of Harrison Smith being so good at his job, how about a little of Dilated Peoples' "Last Line of Defense"? 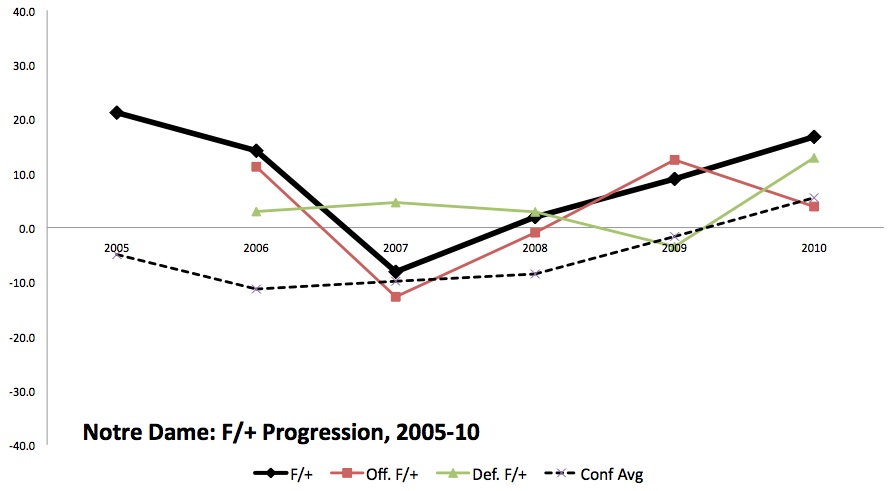 Since the incredible bottoming-out of 2007, Notre Dame has slowly but surely improved every year since then. They didn't actually win enough for Charlie Weis to keep his job, but he set the table beautifully for Brian Kelly, just like Mark Dantonio did for him at Cincinnati. Kelly has put together a great staff and has quickly begun to refine the potential in all the former blue-chippers Weis brought in over the last few years. Even with potential uncertainty at the quarterback and wide receiver positions, there is a lot to like about this squad.

Now the schedule needs to cooperate. The Irish play four teams that will rank in or near our preseason Top 25 (Stanford, USC, Pittsburgh, Michigan ... yes, Michigan), and of their 12 opponents, only Wake Forest and Purdue are guaranteed to project outside the Top 50. People always say this about Notre Dame's schedule, but it's a tough one. There are basically two nearly sure wins (Wake and Purdue, though both are away from home), one nearly sure loss (Stanford), and nine games the Irish could win if they are as good as I think they can be. They will not go 11-1, but that's alright -- they're still a pretty young team outside the secondary, and with Kelly they'll have plenty more opportunities to finally break through at an elite level. Keep picking them to make the national title game, Lou Holtz. Why stop now when you may eventually be right?