Houston Nutt is the face of a lot of things, but if he wants to be the face of Ole Miss football in 2012, he'll need to engineer a bounce-back season this fall with contributions from a lot of newcomers. Can he?

Houston Nutt can't stay out of his own way sometimes. He thrives when expectations are low, then raises expectations too high to meet them. After a fantastic first season in Oxford in 2008, his Ole Miss Rebels were unfairly billed as a darkhorse national title contender in 2009, making the fact that they only won nine games again a disappointment. So somehow he began 2010 with less goodwill than he had probably earned. Expectations are funny that way. The most likely result following a great one-year surge is slight regression, but we tend to expect yet another surge instead. It is unfair, but you know how I feel about this already -- we've already gone down this road in discussing this year's "surge" team, Texas A&M.

Regardless of the goodwill Nutt did or didn't have, it was not the easiest season to be an Ole Miss fan in 2010. The Rebels plummeted last fall. Oregon quarterback Jeremiah Masoli came to town and was ... okay. The run game: okay. The passing game: okay. The pass defense ... you get the point. Nutt's Rebels were great at almost nothing and terrible at almost nothing in 2010. They just sort of existed. Surprisingly enough, just showing up is not going to win you too many games in the SEC.

And if Nutt wants to be the face of Ole Miss football twelve months from now, he should probably put together a nice bounce-back season.

Thirty minutes into Ole Miss' 2010 season, everything was going according to plan. The Rebels had scored touchdowns on two of their first eight plays of the season and led FCS' Jacksonville State, 31-10, at halftime. Virtually everything that happened over the final 11.5 games was discouraging in one way or another. It began, of course, with the Rebels allowing a crazy comeback to Jacksonville State, then losing at home to Vanderbilt as well. I know they aim to be accommodating to visitors at The Grove, but come on.

In all, the offense played at an above average level in six of 12 games, and in five of those six games, the defense played at a below average level. The defense squandered offensive gains, the offense wasn't good enough to win shootouts every week (they went 2-3 in games in which both teams scored at least 30 points), and they played at an overall level that suggested they were even lucky to see 4-8. If this were a young team, then this up-and-down season could build toward something, but there were quite a few strong upperclassmen on this squad. In 2011, we get to see if oversigning actually works, I guess, because strong new contributors are an absolute necessity. 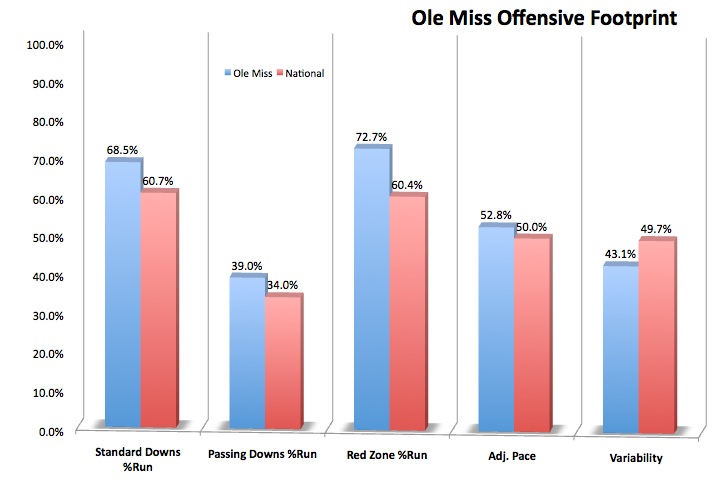 Jeremiah Masoli brought to light all that is good and bad about the NCAA's "graduates with eligibility can transfer to another school for one year" rule. (A rule that I like, and a rule the SEC evidently doesn't like.) On the bright side, Masoli was given another opportunity following a tumultuous exit from Oregon and advanced at least a bit toward a graduate degree. On the down side, he had quite a few ups and downs (he obviously wasn't there in the spring, so his first full practices in an Ole Miss jersey came just weeks before the season started, almost like he was a true freshman), and now he's gone.

Nutt never seemed to trust Nathan Stanley, the quarterback who would have been 2010's leader had Masoli not entered the picture. Despite Masoli's departure, Stanley chose to leave Oxford as well this spring, leaving behind almost no experience whatsoever behind center. Into the void, Ole Miss fans hope, steps Randall Mackey, a former four-star athlete who redshirted last season; Mackey threw for almost 2,800 yards and rushed for another 1,000 in his final season at East Mississippi Community College in 2009, throwing 24 touchdown passes (yay!) and 16 interceptions (boo!) along the way.

If Mackey doesn't win the job, it could be West Virginia transfer Barry Brunetti. Both Stanley and Brunetti are run threats, so the run-pass ratios should stay relatively close to what they were last year. With Jevan Snead at quarterback, Nutt still aimed for a run-heavy attack on standard downs (66.9% run on standard downs in 2009), but they let Snead air it out on passing downs (27.9%). I don't see that happening in 2011. Run, run, run, and pass only if you have to. Then again, with the pass-heavy Gunter Brewer now on staff, the opposite could be true. Whoever said I knew what I was talking about?

If the Rebs do run a lot in 2011, this wouldn't necessarily be a bad thing, mind you. Perhaps the best thing Ole Miss had going for them last year was underrated running back Brandon Bolden (976 yards, 6.0 per carry, 14 TD; 344 receiving yards, 3 TD), whose plus-24.5 Adj. POE was sixth-best in the country. He is a lovely weapon out of the backfield. 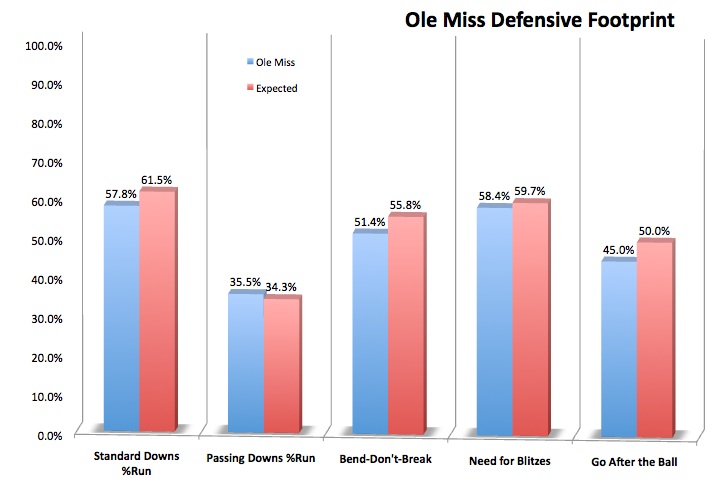 The Ole Miss defense was a rather confusing one in 2010. They had a strong line that ranked in the top 30 of both Adj. Line Yards and Adj. Sack Rate, but they were a complete sieve in the redzone. They were rather efficient on standard downs but, despite a decent pass rush, extremely inefficient on passing downs. Their mentality seemed to change from play to play, and considering they had what seemed like decent depth of playmakers, they just couldn't make enough stops.

Things might get more difficult in 2011. The line may have been a strength, but now the Rebels will have to make do without their two primary contributors at defensive tackle. Jerrell Powe (22.5 tackles, 8.5 TFL/sacks) is gone after what seemed like nine years in a Rebel uniform, and Ted Laurent (15.0 tackles, 3.5 TFL/sacks) departs as well. Nutt and defensive coordinator Tyrone Nix will have to make do with redshirt freshmen and junior college transfers at tackle this year. Be on the lookout, particularly, for redshirt freshman Carlton Martin (a former four-star signee) and JUCO transfer Uriah Grant, who racked up 17 TFL/sacks at Fullerton Community College last year.

The good news is the Rebs should still be in solid shape at end. Three of their four primary ends -- Jason Jones, Wayne Dorsey, Gerald Rivers (combined: 33.0 tackles, 12.5 TFL/sacks) -- return from last year's squad, but more importantly, Kentrell Lockett (31.0 tackles, 10.0 TFL/sacks in 2009) is back after missing last season with injury. As you can see from the cumulative tackle numbers, the primary job of Ole Miss' line is to eat up blockers and free the linebackers up to make the tackle, and that's fine. But making a few plays yourself isn't a bad thing, and Lockett and maybe Grant represent the most high-potential playmakers on the line.

How about "Patron Saint of the Mediocre," by the 1900s? That, or "Still Crazy After All These Years." 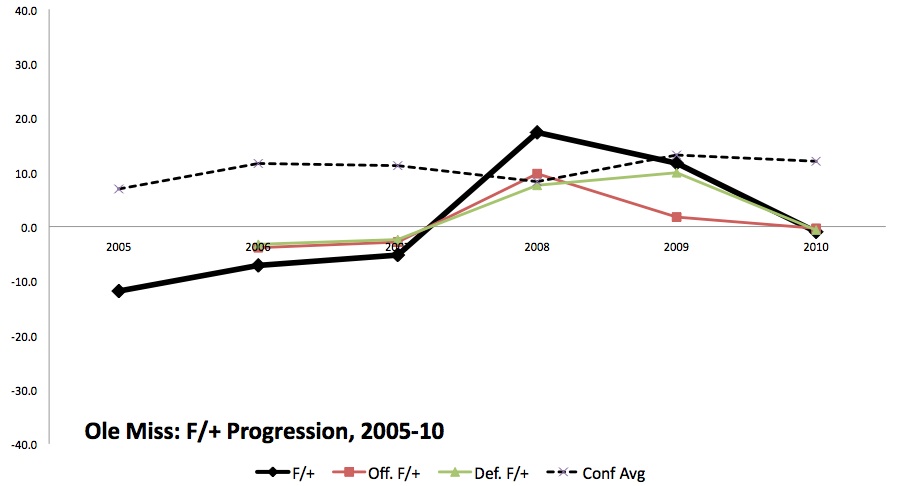 Hope is not lost in Oxford, but the Rebels are certainly scrambling. If some newcomers -- Randall Mackey, C.J. Johnson, one of the JUCO DBs, one of the receivers, one of the young defensive tackles -- live up to potential, then this team could surprise. They do return quite a bit of experience (even if it's not all good experience), their YPP margin suggests they were at least a bit unlucky, and their recruiting averages are strong. Clearly there might be some talent here. (Lord knows, if you're going to be the face of oversigning, you should at least put a quality product on the field.)

No matter what, we'll know what we are looking at by October 1. With tough-but-winnable home games against BYU and Georgia and equally-tough-but-winnable road games against Vanderbilt and Fresno State, Ole Miss could start anywhere between 1-4 and 5-0 (and yes, I'm counting Southern Illinois as a win despite Jacksonville State). Nutt has the reputation for thriving with lower expectations, and ... well, the expectations are quite low. He has 'em right where he wants 'em!