Gordon Gee Backs Gene Smith At Ohio State? Of Course He Does

Share All sharing options for: Gordon Gee Backs Gene Smith At Ohio State? Of Course He Does

Ohio State president Gordon Gee told reporters on Wednesday that his athletic director Gene Smith won't become a casualty of the Jim Tressel scandal in Columbus. "Gene Smith's job is safe," Gee said bluntly. And if you're wondering how OSU's AD and President could possibly come out of all this without looking as morally bankrupt as Tressel, the answer's simple.

The Buckeyes have a much safer, easier scapegoat than Gordon Gee or Gene Smith. Check out Dan Wetzel's column at Yahoo for more insight into how Ohio State's controlling the narrative in all this, and why Terrelle Pryor's become the face of the scandal. It boils down to this:

Generally there are three types of people who get blamed in major NCAA infraction cases.

The greedy player and/or player’s family member; the bumbling assistant coach or the rogue agent and/or booster. Those are the folks who get labeled, fired, kicked out of school. It’s almost never the head coach, athletic director or anyone else in power. The bosses deftly maintain plausible deniability while shifting the blame to an easier target.

Really, you think this guy's going get held accountable for all that's gone on in Columbus? 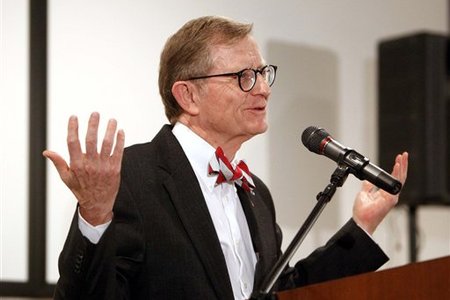 It's the oldest rule in the book--never trust a dude that wears bowties. And at a time when all eyes are on Terrelle Pryor and a handful of loaned cars, Wetzel hits the nail on the head here.