While Big East rivals were going with youth and offense in their coaching searches, Connecticut went with experience and defense. Will the conservatism pay off? And is there any hope for the Huskies in 2011 with a new staff and new offensive backfield?

Share All sharing options for: 2011 Season Preview: Conservative Choices And The Connecticut Huskies

In 2010, the Connecticut Huskies became italicized. As in, "When Connecticut can make a BCS bowl but Boise State can't, your system is flawed," or "Wait, Connecticut is in the Fiesta Bowl? Connecticut?" UConn became the face of all that is right and wrong with the BCS bowl structure this season. They won the Big East's automatic BCS bid despite an 8-4 record and an F/+ ranking in the 50s, beating West Virginia and Pittsburgh in a three-way tie and snagging the Fiesta Bowl slot opposite Oklahoma. They showed that anybody (in a BCS conference) has a shot at a big-time, high-visibility matchup, which is good, right? Of course, they struggled to sell tickets to the game, they took a financial loss, and they lost by 28 points, giving anti-BCS folks one more bullet in the chamber. Then, as did the other two Big East co-champions, they went about replacing their head coach.

There wasn't as much drama in UConn's coaching change as there were with Pittsburgh and West Virginia -- no double coaching changes, no disastrous, forced "head coach in waiting" arrangements. Randy Edsall resigned to take a "dream job" (his words) at Maryland, and UConn methodically and quietly went about finding his replacement. But while Pitt (the second time around) and WVU hired young, offensively-minded up-and-comers in the coaching ranks, UConn went conservative. They hired an infinitely more experienced, defensive-minded coach in former Syracuse head man Paul Pasqualoni.

Once I realized that Pasqualoni is somehow only 61 years old (my first guess would have been much closer to 70 -- he's been around forever), I warmed to the hire a bit. Though he couldn't quite replicate the success that his predecessor Dick MacPherson found at Syracuse, his profile was probably raised by successor Greg Robinson's struggles. Pasqualoni won 107 games in 14 seasons at The 'Cuse and finished with the best conference record in the fledgling Big East six times. He inherits a team in transition, in a conference in transition. I cannot tell you if this was a good hire, but the thought process -- if the conference's stable of coaches is young and, in some cases, high on offensive potential, then going with experience and defense could pay off -- was one I can defend. So they've got that going for them.

The recipe for winning the Big East, as outlined by Connecticut in 2010: don't lay too many eggs and win your close games. In what ESPN's Brian Bennett has frequently called a "torso" league (no top or bottom, just a giant middle), this makes sense. Don't give games away, make the most of your opportunities, and you too can earn the right to get pummeled by a national power on (or around) New Year's Day! After an 0-2 conference start that included an unimpressive trip to Rutgers and a pummeling at the hands of Louisville, UConn just won. They didn't often look pretty doing so -- only once in the last half of the season did they play what anybody would call an above average offensive game -- but they won, by three points over West Virginia, two points over Pittsburgh and three points again over South Florida. Throw in nice showings against Syracuse and Cincinnati, and voila! Conference title.

In the end, I doubt any UConn fans care that they won a conference title despite being statistically unimpressive in almost every way -- the banner will still say "Big East Champions," and they can obviously tell this Missouri fan that they have been to more BCS bowls in the last 40 years than his team has. 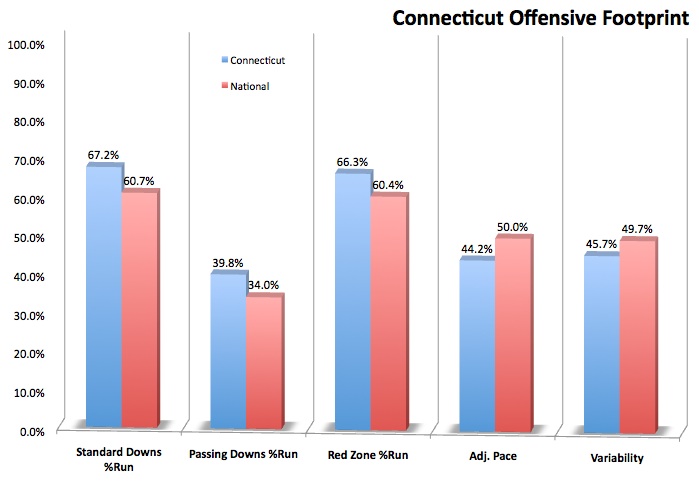 Close your eyes and picture the generic Syracuse offense of the 1980s and 1990s. Are you envisioning high run percentages, slower pace, bruising halfbacks, mobile quarterbacks and play-action bombs? That could be what you are about to see from UConn this season, as Pasqualoni has more-or-less gotten the old band back together. By his side will be offensive coordinator George DeLeone, his former Syracuse O.C. and a coach with 25 years of experience at current or former Big East schools (Rutgers, Syracuse, Temple). Whether he can orchestrate a successful Big East offense in 2011 and beyond remains to be seen, but he should find things to like about the style of his current personnel. The backfield is devoid of experience, but the line is good, and ... let's face it, this personnel wasn't exactly brought to Storrs to run the spread under Edsall.

The Huskies may have gotten the job done in the Big East last year, but they were far from an offensive powerhouse. Jordan Todman (1,695 yards, 5.1 per carry, +4.1 Adj. POE, 14 TD) was a star at running back, and his explosiveness was the best thing UConn had going for it, but he declared early for the NFL draft, leaving a void in the backfield. Meanwhile, no. 2 rusher Robbie Frey (389 yards, 5.2 per carry, +5.1 Adj. POE, 4 TD) elected to finish up his eligibility as a Kutztown Golden Bear. That leaves USC transfer (and part-time fullback) D.J. Shoemate (115 yards, -3.5 Adj. POE) and some youngsters (sophomore Martin Hyppolite, redshirt freshman Lyle McCombs, freshman Max DeLorenzo).

But enough about the weaknesses; let's talk about what could be a phenomenal offensive line. Three starters return from a line that was extremely well-rounded, ranking in the Top 25 in both Adj. Line Yards and Adj. Sack Rate. Gigantic left tackle Mike Ryan (6-foot-5, 333 pounds) and senior center Moe Petrus (39 career starts) are both likely all-conference performers (Ryan was first-team last year, Petrus second-team), making the loss of stellar guard Zach Hurd less of an issue. Great lines can make iffy backfields look good. At least, that's the hope if you are a UConn fan (or running back) this year. 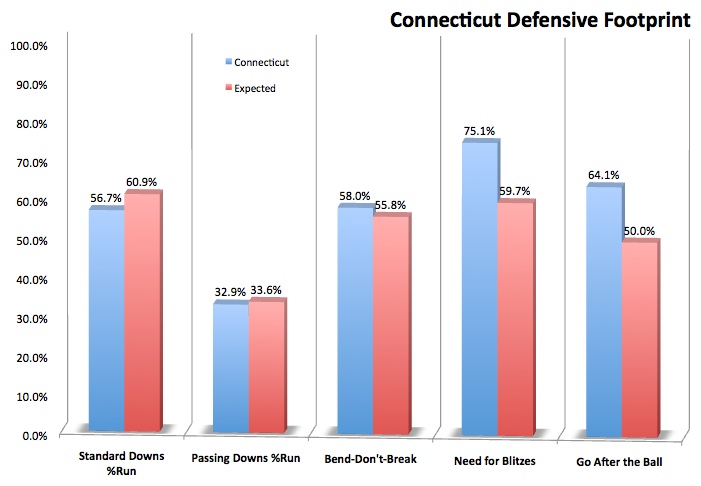 Don Brown takes over a Connecticut defense that must replace just two starters, albeit two good ones. Brown was Ralph Friedgen's D.C. at Maryland over the past two years; after a rough first season, the improvement was significant for Brown in year two in College Park.

When you see such across-the-board improvement, chances are a talent upgrade was also involved, but things certainly clicked for Brown. If he can oversee similar improvement in Storrs, UConn fans might see the Randy-Edsall-for-Don-Brown trade with Maryland as a decent one.

UConn is significantly experienced, both on the line and in the secondary. UConn boasts of play-making ability at the tackle position that few can match. Kendall Reyes (32.5 tackles, 10.0 TFL/sacks, 2 INT, 4 PBU) is one of the best in college football, while Twyon Martin (20.5 tackles, 5.0 TFL/sacks) and Shamar Stephen (20.0 tackles, 4.0 TFL/sacks) are disruptive as well. Unfortunately, the Huskies probably still need an upgrade at the end. They held up alright against run blocking, but they couldn't get to the quarterback. If Jesse Joseph (32.0 tackles, 12.0 TFL/sacks) wasn't making a play from the end position, nobody was.

There might be more pressure on the line because of the void in the linebacking corps left by the departures of all-conference performer Lawrence Wilson (97.0 tackles, 10.0 TFL/sacks, 3 FF, 2 FR, 3 PBU) and Scott Lutrus (49.5 tackles, 3.5 TFL/sacks). Sio Moore (91.0 tackles, 11.5 TFL/sacks, 2 FF, 2 FR) is all over the place, but he'll be flanked by a couple of inexperienced battery mates.

How about a little "Fiesta" by R. Kelly? Or The Pogues? Or Gato Barbieri? Or Ween? Or The Charlie Parker Sextet? 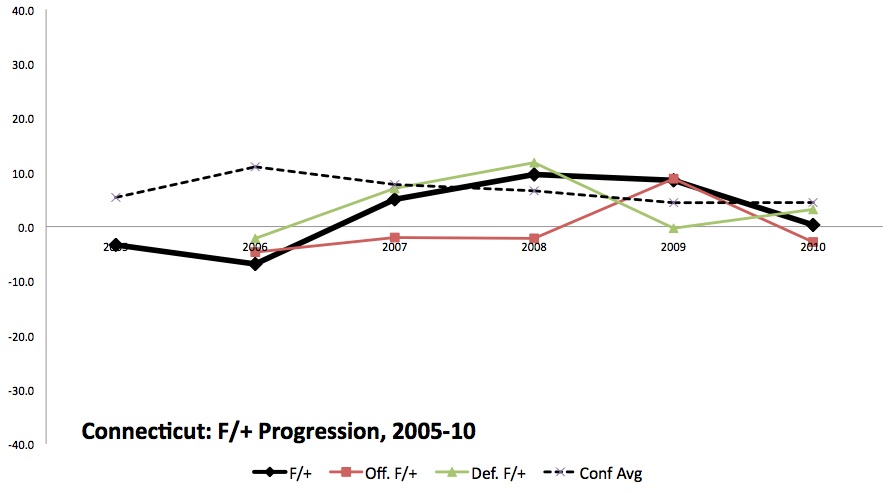 In games against evenly-matched opponents (i.e. in the Big East), your ability to win close games goes hand-in-hand with your YPP margin. Simply being a little better at turning yards into points can make the difference between a 3-4 conference record and a trip to the Fiesta Bowl. UConn's YPP margin was one of the more favorable in the country, and with a new coaching staff and entirely new offensive backfield, it will be difficult for UConn to manage games quite as well. Combine that with poor recruiting rankings and only decent five-year performance averages, and the odds are significantly stacked against the Huskies in the short-term.

Randy Edsall is the only coach Connecticut has had since making the jump to FBS. He leaves behind a program that has succeeded more than should have been expected in its first decade at this level, but the facilities and recruiting base are still somewhat limited. In hiring Pasqualoni, UConn didn't exactly go the 'underdog strategies' route, but they did go with somebody who is familiar with the area and whose style can take advantage of the type of recruits that typically thrive in the northeast. He was a definitively conservative hire, but for this program, that might be alright. Especially if he comes up with a nice "stopping the spread" blueprint.