Your Team Needs More Hugs: Hugs Etienne, That Is.

Share All sharing options for: Your Team Needs More Hugs: Hugs Etienne, That Is.

Every year's crop of high school recruits produces some new kind of magic. One year there's I-Perfection Harris ; the next, a man named Storm Johnson who went to play for the Miami Hurricanes. Johnson is currently embroiled in a battle over the terms of his transfer from Miami, and we suppose that means his career is off to a...stormy start. 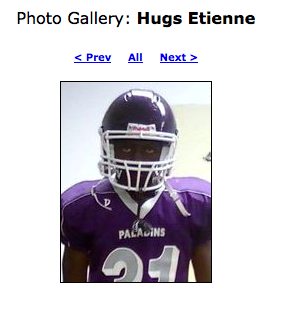 Wisconsin football just got a lot cuddlier. I bet he has a love/hate relationship with his name, because he's like "GRRR, I'M TOUGH MAN DESPITE NAME," but then he's like "Hugs are pretty great, guys. Let me give you a me to show you how much I care." (HT: MGoBlog.)