For a program that has struggled to string together winning seasons, Dan Mullen is building a solid foundation. Can Mississippi State overcome the losses of both a star assistant coach and their entire linebacking corps to keep moving forward?

Share All sharing options for: 2011 Season Preview: 51 Phantom And The Mississippi State Bulldogs

Though the 2010 football season was one of excitement on the field for the Mississippi State football program, it included a level of off-the-field emotion that far too many teams have had to deal with in the last year. The Bulldogs had to go through the incredible devastation of burying a teammate when defensive end Nick Bell fell ill in October (after starting the season as a first-stringer) and passed away in early November, claimed by a rare form of cancer. Despite dealing with a level of emotion that only death can bring, however, the Bulldogs paid tribute to Bell with a high level of play. Playing in their first January 1 bowl game in 12 years, MSU finished off Michigan's Rich Rodriguez era by absolutely trouncing the Wolverines in the Gator Bowl and posted only their second nine-win season since 1981.

With an offseason to recharge the emotional batteries and replace some key defensive cogs, head coach Dan Mullen and the Bulldogs will now attempt to do something Mississippi State has not done very much over time: follow winning with more winning.

Through the decades, MSU has teased fans with hope, especially under Emory Bellard (1979-85) and Jackie Sherrill (1991-03). Individual seasons of stellar play have been followed by unexpected droughts. Since Darrell K. Royal left Starkville for one season at the Univ. of Washington in the mid-1950s, the Bulldogs have experienced spans of consecutive seasons exactly four times: 1974-76, 1980-81, 1991-92 and 1997-00. Otherwise, it's been one-and-done. But rarely has hope been as high as it is right now, with Mullen quickly building a sturdy, legitimate program. It is difficult to assess what MSU's ceiling is in the ridiculously rugged SEC West, but after two years under Mullen, the bones of this program seem as fortified as they have been since the late-1990s. Now, Mullen just needs to stay in Starkville long enough for us can find out how far MSU can rise. He was involved in seemingly every coaching rumor of the offseason, but now he begins Year Three in charge of the Bulldogs.

Dan Mullen has a stellar offensive background, and to be sure, the Bulldogs' offense has improved rather significantly compared to where it was at the end of (okay, for most of) the Sylvester Croom era. But MSU won games with defense in 2010.

Actually, that's not entirely true. For the first half of the season, the offense was mostly stellar, performing at an above-average level in four consecutive games (including an LSU game marred by five interceptions -- as I've mentioned before, S&P+ only views turnovers as zero-point plays instead of something devastatingly negative; this will be adjusted at least slightly in the future). But there was a serious, measurable fade over the last half of the season.

The defense, meanwhile, was mostly consistent, performing at a below-average level only three times, against LSU, Alcorn State and Arkansas. Both units were obviously outstanding against Michigan. 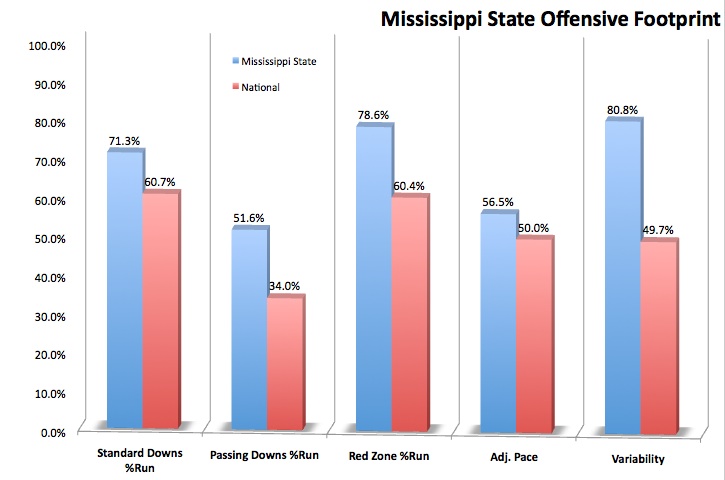 Fun with schedule adjustments: upon first glance, it appears that Mississippi State's passing attack was semi-explosive. Top targets Chad Bumphis, Arceto Clark and Brandon Heavens all averaged at least 14 yards per catch, and when combined with catch rates of 58% or higher, one gets the impression that this was a high-octane, high-explosiveness pass attack.

Of course, it really wasn't. MSU's Passing PPP+ rating was mediocre at best. To say the least, they had some help in the "stat-padding" department. They played four games against either FCS teams (Alcorn State) or defenses ranked 100th or lower in Def. F/+ (No. 104 Houston, No. 105 Memphis, No. 115 Michigan), and made the most of those opportunities.

For the season as a whole, Mississippi State was a run-first, run-second offense featuring the exploits of Vick Ballard (968 yards, 5.2 per carry, +15.0 Adj. POE, 19 TD), LaDarius Perkins (566 yards, 5.6 per carry, -0.2 Adj. POE; 247 receiving yards as a redshirt freshman) and quarterback Chris Relf (836 pre-sack rushing yards, -8.1 Adj. POE). Ballard himself piled up a tremendous resume while trouncing bad defenses (he carried 29 times for 313 yards and eight touchdowns against Memphis, Alcorn State and Houston), but he was so good against those defenses that he still registered well on the Adj. POE scale. That he had decent moments against good defenses (62 carries for 328 yards against Florida, Alabama and Arkansas) helped his cause despite a few iffy performances.

Virtually all of MSU's skill position players return in 2011 -- Ballard and Perkins, Relf and fellow quarterback Tyler Russell, all of the above receivers and Chris Smith (11.0 per catch, 80% catch rate). This wasn't a particularly strong SEC offense in 2010, but one has to figure they will improve a bit with such a high level of experience. 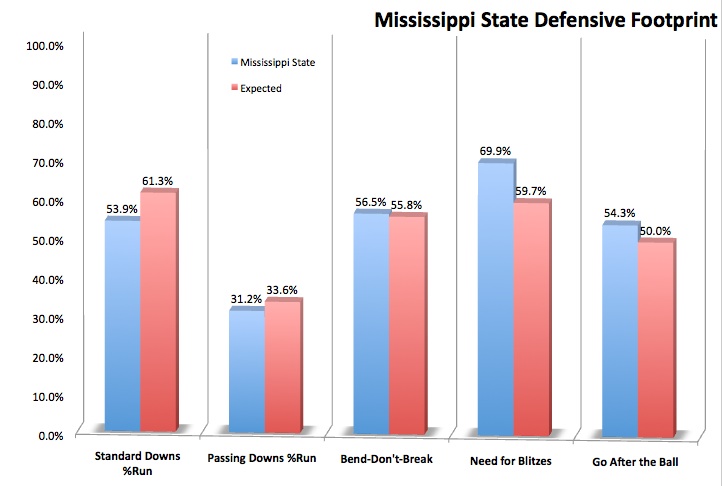 When Sylvester Croom was in charge in Starkville, MSU always had a pretty decent defense. But it was nothing like what the Bulldogs put on the field in 2010. Mississippi State was good against the pass and great against the run, something that showed particularly against more one-dimensional teams like Michigan. Defensive coordinator Manny Diaz coached innovative tactics for attacking a team's run, and when opponents abandoned the run to throw the ball, the MSU secondary was mostly good enough to make sure that didn't beat them either.

A fast riser in the world of coaching, Diaz was successful enough in just his first year in Starkville that Texas came calling and hired him away. Defensive line coach Chris Wilson now assumes the big chair; this is his first d.c. job, so it is difficult to glean how his philosophy might differ from that of Diaz, but he has had a lot of success as a defensive line coach through the years at MSU, Oklahoma, Colorado and Illinois State. The stats suggest the line was what stirred MSU's drink last fall, so that's a good start.

In terms of tackles, five of the top six linemen are back, but the best one is gone. End Pernell McPhee (10.0 TFL/sacks, 4 PBU) departs, but last year's depth could pay off. Eight linemen had at least 2.0 TFL/sacks, and tackles Fletcher Cox and Josh Boyd (combined stats: 39.0 tackles, 14.0 TFL/sacks) are both stellar. McPhee, a fifth-round draft pick this April, was good, but ends Sean Ferguson and Trevor Stigers may be able to pick up the slack.

In Diaz' system, linebackers were used in creative ways as well, and this unit does not return the same level of depth as the line. Of MSU's four primary LBs, three are gone, including fourth-round draft pick K.J. Wright (74.5 tackles, 8.0 TFL/sacks, 9 PBU) and sixth-rounder Chris White (82.0 tackles, 15.5 TFL/sacks, 2 INT). Cameron Lawrence (27.0 tackles, 2.5 TFL/sacks) will lead a green unit.

Since Diaz' defenses were intended to confuse and mislead, to make quarterbacks see defenders where there are none, how about a little "51 Phantom" by North Mississippi Allstars? Because I will never pass up an opportunity to show some NMAS love. 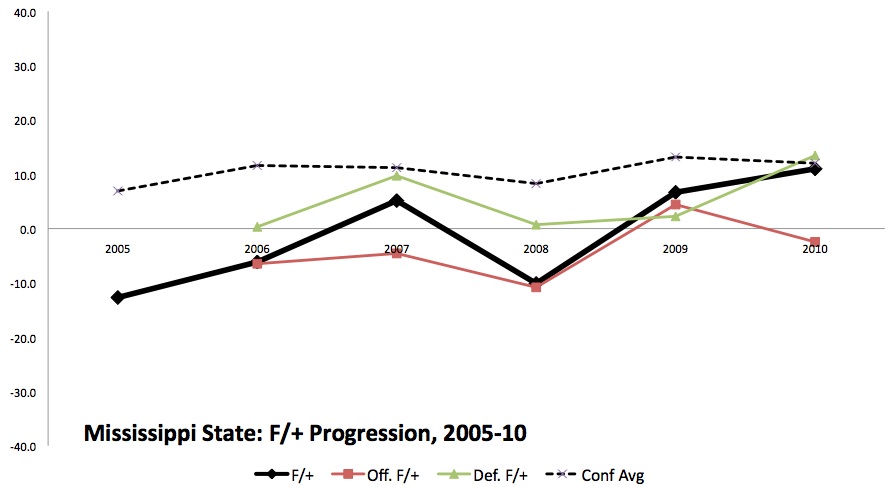 On the surface, there is quite a bit working against Mississippi State in 2011. They benefited from extremely good fumbles luck last year, and their minus-4.1 YPP Margin suggests they were a little unsustainably good from a points-to-yards standpoint. Plus, they must replace the outstanding coordinator of a defense that carried the Bulldogs at times. There are things to like, of course: Chris Relf is well-tested, Vick Ballard is an underrated back, the defensive line is deep, and the overall level of experience is strong. But in the SEC West, you need more than "things to like." Dan Mullen is a good coach, and he will absolutely lead a competitive team this fall, but initial signs point to a step backwards.

Mississippi State's 2011 schedule will afford us an early glimpse of what they have going for them. After a gimme against Memphis, the Bulldogs take on Auburn (on the road) and LSU (at home) back to back. If they are 2-1 after three games, this season could be headed toward something special. If they are 1-2, however, the goal likely becomes simply maintaining bowl eligibility for another season and attempting another nice step forward in 2012.