Utah takes the BCS conference leap in 2011. Withstanding the physical burden shouldn't be an issue (not with that defensive line), but can the Utes overcome a shaky run game, new bodies throughout the secondary and Jordan Wynn's injury issues to make some noise in the Pac-12 South?

Share All sharing options for: 2011 Season Preview: The Utah Utes and Ch-Ch-Changes

Arizona, Arizona State, Cincinnati, Colorado, Louisville, Oklahoma State, South Florida, Texas Tech. That is, for all intents and purposes, the entire list of programs who made the leap from a mid-major conference to one of the big boys in the last 75 years. (And South Florida barely counts, having spent only two years in Conference USA before moving to the Big East.) Sure, there were other, similar leaps from independents (Michigan State, for example), but these are the eight programs who have taken, more or less, the step Utah takes this coming fall.

Utah's recent, pre-move performances have basically dwarfed that of all the others to take the plunge. They had potentially the best run defense in the country last year, they have a blue-chip quarterback, they have a series of big-play threats, and they have two BCS bowl wins in the last decade. They are more prepared to make this move than, really, any team ever has been (other than TCU to next year's Big East, that is).

There is a series of typical, semi-patronizing 'worries' analysts usually come up with when discussing a historically mid-major program taking on a tougher slate of major conference teams. Are they athletic enough? Can they compete physically? How will they avoid wearing down? The answers for Utah heading into 2011: 1) Yes, 2) Yes, and 3) By being as fast and physical as everybody they play. In a USC-less Pac-12 South race, Utah is as big, fast and physically capable of anybody they will be taking on.

If Utah doesn't win the inaugural South race, it won't be because they were too small or got manhandled; it will be old-fashioned reasons like "Their quarterback's shoulder is made of papier mache," or "They lost too much in the run game," or "Their secondary is so new that the safeties still have some new car smell." But with the best defensive line in the South and multiple big-play weapons in the passing game, they're going to give themselves a fighting chance.

In a "prove we're worthy" audition season, Utah started out beautifully before a key injury finally began to take its toll. Star quarterback Jordan Wynn had himself one trying sophomore season.

[W]e can't ignore the fact that Wynn was injured during last year's spring game (on the first play), injured in the season-opening win over Pittsburgh (missed two games) and finally, was injured mid-season in a win over Iowa State that nagged him the remainder of the season and kept him out of the Las Vegas Bowl.

In all, Wynn (2,334 yards, 7.8 per pass, 62% completion rate, 17 TD, 10 INT) fought through the constant injury issues and produced much of the season. But a terrible late-season fade meant Utah's 2010 season was only good, not great. Backup quarterback Terrance Cain (703 yards, 7.3 per pass, 64% completion rate, 6 TD, 2 INT) was somewhat serviceable (his raw stats were padded by games against New Mexico and UNLV), but the offense became quite conservative under his watch, and the performance predictably suffered.

(This is a bit unfair, as it ascribes Utah's iffy offensive performance against BYU to Cain, who only played half the game. Regardless, even assigning that to Wynn's total, there was a dropoff between Injured Wynn and Healthy Cain.)

Meanwhile, the defense, sans a three-game slump in November, played at a consistently stellar level, allowing the Utes to steal wins against Air Force and BYU and reach the ten-win marker for the third consecutive season. The defense gave the Utes a shot in the Maaco Bowl's mid-major showcase to finish the season, but without Wynn, the offense just couldn't put anything together against what was a devastating Boise State defense. 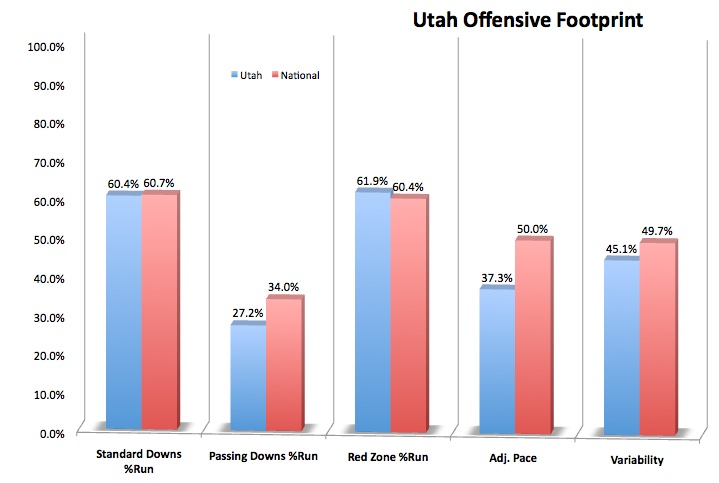 One has to say this for Utah: they went for it. The Utes were quite aggressive on offense in 2010, and it often paid off. Their efficiency was not up to par, but they were among the best big-play offenses in the country. They ran a perfectly average amount on standard downs (often to great success), and they trusted Jordan Wynn to make big plays on passing downs (and he usually did). Five receivers averaged at least 9.8 yards per target last year, and four return.

If Wynn isn't healthy? Yikes. Neither Tyler Shreve nor Griff Robles took advantage of Wynn's spring absence to stake a claim for the No. 2 spot. Few teams have truly strong backups, but with Wynn's recent injury history, it is a concern. 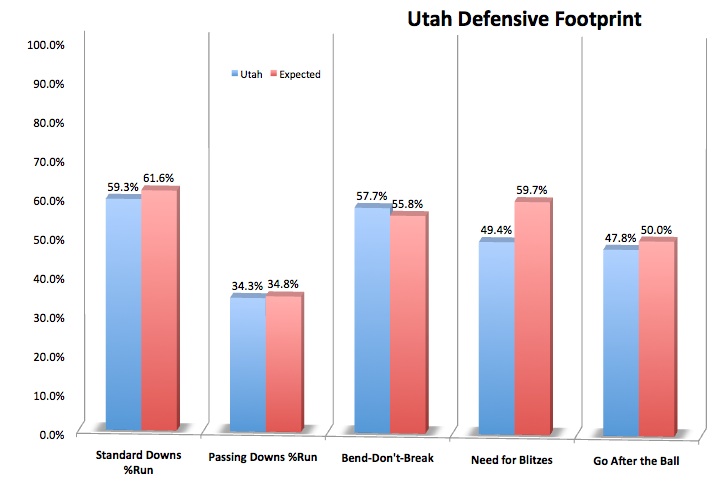 Utah's run game might be a legitimate concern, but they've got one thing going for them: opponents' running game will be just as problematic. The Utes had the single best run defense in the country last year, showing off both size and depth; eight linemen managed at least two tackles for loss, but none had more of an impact than all-conference end Christian Cox (36.0 tackles, 8.5 TFL/sacks). He is gone, as is tackle and surprise NFL early entry Sealver Siliga (28.5 tackles, 4.0 TFL/sacks). But in all, four of the top seven linemen return, including a pair of promising ends: Derrick Shelby (29.0 tackles, 6.5 TFL/sacks, 3 FF, 3 PBU) and Trevor Reilly (15.0 tackles, 5.5 TFL/sacks as a redshirt freshman). The perception might be that mid-major teams are smaller in the trenches, and that might the case with a lot of programs, but with at least four 300-pound tackles and four 260-pound ends, nobody is going to push Utah around.

A stout line should serve them well, shutting down iffy Pac-12 South running games, but the Utes will still need to improve a bit once they have leveraged teams into passing downs. Last year they offered receivers rather large cushions, hoping that a strong pass rush would force opposing quarterbacks into poor decisions. That occasionally worked, but if the quarterback got the pass off, he was probably finding some open receivers underneath coverage.

Now, Utah has to replace three of their top four defensive backs. Gone are playmaking nickel back Lamar Chapman (57.5 tackles, 10.5 TFL/sacks, 3 FF, 3 PBU), free safety Justin Taplin-Ross (51.5 tackles, 4.5 TFL/sacks, 2 INT) and early-entry cornerback Brandon Burton (42.5 tackles, 1.0 TFL/sacks, 2 INT, 8 PBU), and sophomore strong safety Brian Blechen (52.0 tackles, 3.5 TFL/sacks, 4 INT, 2 FF, 5 PBU) has moved to outside linebacker. in their place are quite a few unknowns. Almost all unknowns, actualy. Cornerback Conroy Black (17.0 tackles, 1 INT, 3 PBU) has had his moments, but the fact that he is the wily veteran of the secondary is a bit frightening.

"Change Is Hard," by She & Him
"Change Of The Century," by Ornette Coleman
"Changes," by Common
"Changes," by David Bowie
"Changes in Lattitudes, Changes in Attitudes," by Jimmy Buffett
"Everybody's Got To Change Sometime," by Taj Mahal
"Roll With The Changes," by REO Speedwagon
"Something's Changed," by Sharon Jones & The Dap-Kings
"Suddenly Everything Has Changed," by The Flaming Lips
"Things Have Changed," by Bob Dylan 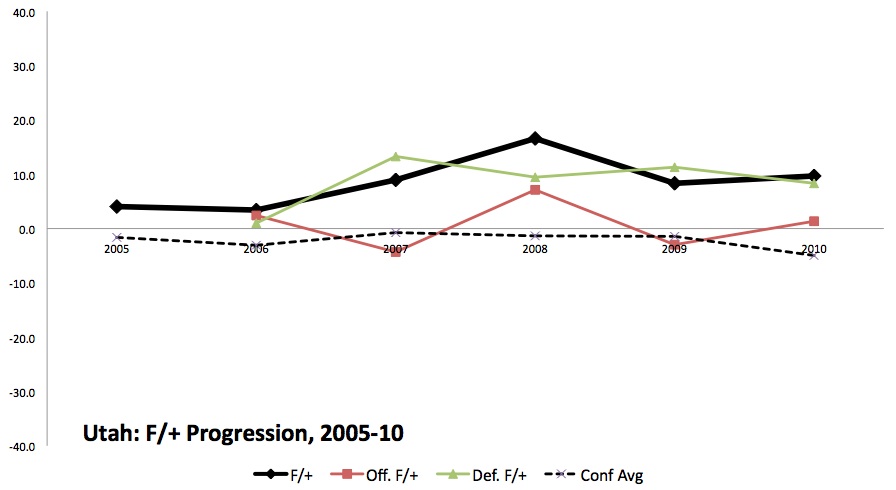 Utah was a bit lucky when it comes to Yards Per Point last season, and they were quite unlucky when it comes to recovering fumbles. Their five-year performance averages are higher than those of anybody else eligible for the Pac-12 South title, but their recruiting has admittedly lagged a bit. Great run defense, bad run offense. Great pass offense, potentially bad pass defense. In 2011, Utah brings as much to the table as it takes off, and with USC out of the picture, the Utes probably have as much of a chance as anybody to represent the South in the first Pac-12 title game.

In looking at Utah's schedule, the key becomes obvious: survive September. Mid-September trips to USC and BYU will not clinch or doom the Utes' South title bid, but it will establish the narrative they will take into the meat of conference play. Meanwhile, two home games will actually probably determine Utah's fate in the South. Washington and Arizona State come to town on October 1 and October 8; U-Dub is absolutely a team the Utes should take down at home, and Arizona State is almost certainly Utah's biggest threat in the South race. If they win these two games, then they are officially the favorite in the South. In all, the schedule is meaty (few major conference teams have a road slate tougher than USC-BYU-Pittsburgh-Cal-Arizona-Wazzu) but semi-manageable as long as Jordan Wynn stays healthy. Which is, of course, a huge 'if.' With an injured Wynn, the expectations plummet.