In 2010, a senior-laden Iowa squad played as well as almost anybody in the country for two months before fading dramatically. Now, yesterday's backups become today's starters; can the new Hawkeyes avoid both a fade and a tailspin?

Share All sharing options for: 2011 Season Preview: Proven Programs And The Iowa Hawkeyes

In college football, you win by winning; the best predictor for future success is past success -- not just last year, but in the last four to five years. As a projection factor, recent history dwarfs everything else, from recruiting rankings, to returning starters, to turnover margin, to anything else you look at when you're trying to figure out if a given team is going to be good next year.

For no team is that more evident than the Iowa Hawkeyes. Kirk Ferentz's squad returns only nine starters from a team that faded dramatically in November last year and finished a disappointing 8-5, 4-4 in conference. They must replace a starting quarterback, an all-conference offensive lineman, three-quarters of a highly-touted defensive line, two stellar safeties, and three of their top four linebackers. And yet, the projections in the Football Outsiders Almanac 2011 (college portion available now, with package information coming later today!) give Iowa a 50-percent chance of going 6-2 or better in the Big Ten Legends division and a 60-percent chance of going 9-3 or better overall. They are projected to finish in a three-way tie with Michigan and Nebraska atop the Legends Division.

So they lose a ton of talent, and they are supposed to do better? Eh?

There are two primary reasons why Iowa has such favorable projections:

1. The Big Ten is not exactly chock-full of elite teams this year, especially the eight on Iowa's schedule. Their conference home games come against Northwestern, Indiana, Michigan and Michigan State, and they have extremely winnable road games against Purdue and Minnesota. Win those six, and voila ... 6-2. That they are projected to fall from 21st overall to 29th doesn't matter.

2. The Hawkeyes have the most enviable trait in college football: a track record. They are a proven program. They have finished 12th, ninth and 21st in the F/+ ratings in the last three seasons. They have four Top 21 finishes in the last six years, and even with 2007's mediocre squad (6-6, 68th overall) weighing them down, their recent performance gives them the benefit of the doubt. As we continue to count down toward better and better recent programs in this preview series, you will see this becomes more of a theme. For example, Ohio State loses their coach, quarterback, and approximately 38 other guys to a half-season's suspension? No matter. They're still projected 15th. The best way to be good in the present is to have been good in the past.

It clearly doesn't always work this way, however. Just ask Texas. And in Iowa's case, there have been, for quite a while, questions regarding the layer of talent hiding beneath the star power of Adrian Clayborn, Ricky Stanzi, Derrell Johnson-Koulianos, Christian Ballard, Julian Vandervelde, etc. The stars are gone in 2011; for better or worse, Iowa will sink or swim with yesterday's backups. And if the talent is lacking, the Hawkeyes will come nowhere near 9-3.

Despite two losses, through the first two months of the season Iowa had played like one of the best teams in the country. Entering November, they ranked third overall in S&P+ thanks to the fact that a) they played well in both losses, and b) they played really, really well in most of their wins. Then November happened.

This was the second consecutive season in which Iowa suffered a losing record in November, but at least in 2009, only the offense fell apart (November 2009: Iowa 19.9 Adj. PPG, Opponents 12.9). In 2010, an incredibly efficient offense fell pretty far below average, and a defense with a ton of pro talent underachieved as well. They rebounded with a nice offensive performance in the Insight Bowl versus Missouri, but November was the adversary. 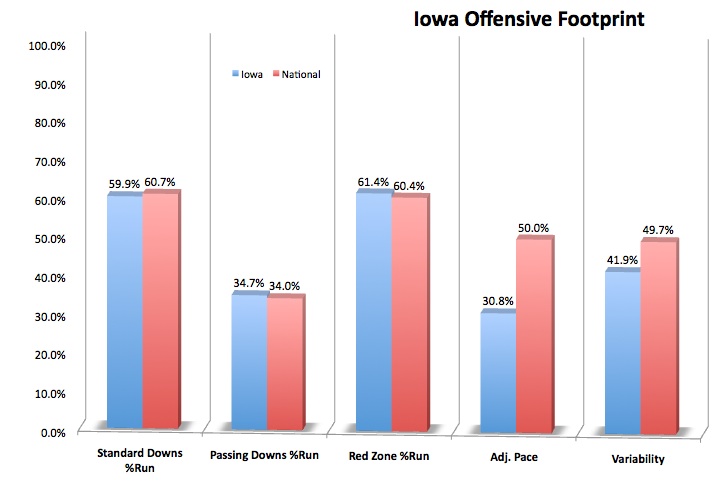 If you watched the Insight Bowl, you know Marcus Coker's name (622 yards, 5.5 per carry, -1.3 Adj. POE, 3 TD). The then-freshman rushed for 219 yards against a solid Missouri defense, and with help from a Micah Hyde pick six, he led the Hawkeyes to a nice rebound victory. You cannot escape Coker's name in an Iowa preview, and with good reason, but here's the thing: Iowa throws so much more than you think they do. At least, they did last year, when they had one of the nation's most trustworthy quarterbacks in Ricky Stanzi (3,004 yards, 8.7 per pass, 64% compilation, 25 TD, 6 INT). This was by no means an aggressive, air-it-out attack, but Iowa was unafraid to throw the ball.

How will that change with James Vandenberg in charge? The junior from Keokuk started two games for an injured Stanzi in 2009 and has, to date, compiled an uninspiring passing line: 47-for-95 (49%), 515 yards (5.4 per pass), 3 TD, 5 INT. However, since most of his attempts came as a redshirt freshman, that is probably not a true indicator of his ability. He will have some interesting weapons around him; Marvin McNutt (861 yards, 16.2 per catch, 66% catch rate, 8 TD) has been one of the steadiest, more underrated receivers in the country through the years; without Derrell Johnson-Koulianos in uniform, McNutt is now the clear No. 1 option.

McNutt can handle the load despite missing spring practices with a damaged shoulder, but a clear No. 2 would help. Former star recruit Keenan Davis (131 yards, 11.9 per catch, 55% catch rate) has caught just 15 passes in his first two seasons on the depth chart; he has a world of opportunity as he approaches his junior season. Tight end Brad Herman (154 yards, 17.1 per catch, 60% catch rate) has not been severely tested, but he made the most of his opportunities last season. After these three options, however, there is almost no experience whatsoever on the depth chart. Johnson-Koulianos, McNutt, then-senior tight end Allen Reisner, and then-starting running back Adam Robinson combined for 74% of all targets in 2010; that did not leave many opportunities for everybody else. Coker may have been good in the bowl, but the running game overall was only average in 2010; they will probably need the pass to succeed, and outside of McNutt, there are almost nothing but unknowns. 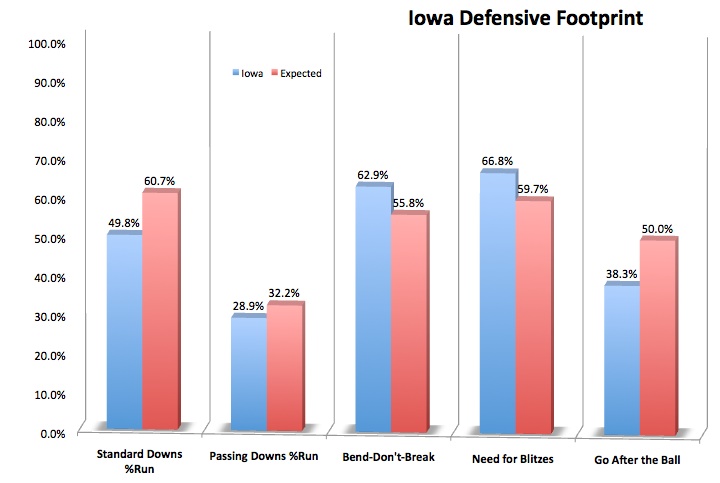 Norm Parker believes in what he believes in. His faith in the 4-3 Cover 2 borders on bold. He isn't going to shift his personnel around much whether he's going against a spread or he's going against Wisconsin. His D is going to allow underneath passes and bend quite a bit, but Parker trusts his players to eventually make a play, and that trust typically pays off. Despite what was frankly an underachieving defensive line last year, the Hawkeyes prevented big plays beautifully and attacked on passing downs. It wasn't the most brutal, clinical defense of Parker's tenure in Iowa City, but it still ranked in the S&P+ Top 20, mostly because of effective work on passing downs.

Parker doesn't like to blitz more than he has to -- in recent years he was able to trust Clayborn and company to raise a ruckus and get to the quarterback while sending only four guys. Unless Broderick Binns (26.5 tackles, 1.0 TFL/sacks, 1 INT) or someone new to the rotation -- LeBron Daniel (4.5 tackles, 1.0 TFL/sacks, 1 FR)? Dominic Alvis (2.0 tackles, 1.0 TFL/sacks)? A redshirt freshman like Mike Hardy or Louis Trinca-Pasat? -- is ready to step up, he could be forced to blitz more in 2011. Tackle Mike Daniels (28.5 tackles, 11.0 TFL/sacks) is a keeper, and rising redshirt freshman tackle Carl Davis might be ready for a star turn, but the pass rush is, to say the least, uncertain, especially considering Iowa didn't get to the quarterback particularly frequently with Clayborn and company in 2010.

How about a little "Coulda Woulda Shoulda," by Panacea? Coulda beaten Arizona, woulda beaten Wisconsin, and shoulda kept up their September/October pace in November. 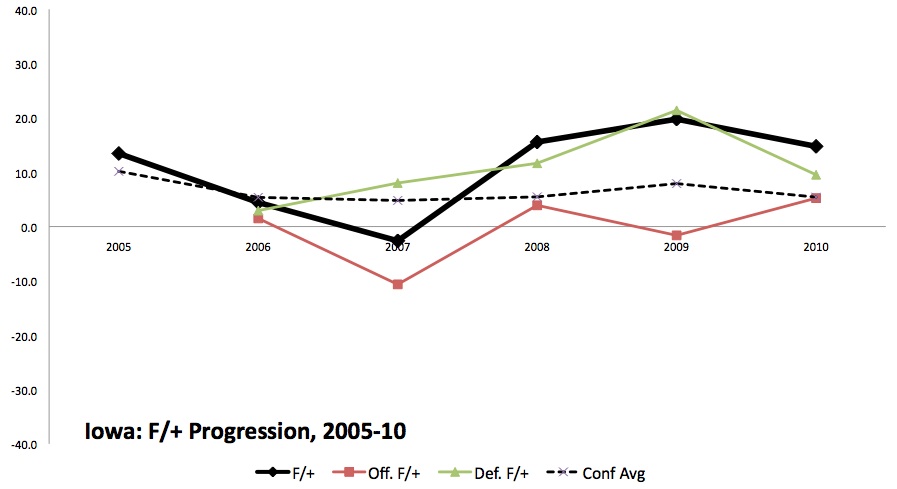 Iowa is likely to take a step backwards in 2011, and even if they don't live up to F.O. projections, they still couldn't be timing an iffy season any better. The schedule at hand probably precludes too far a fall. But with so few returning starters, less-than-spectacular recruits replacing proven stars, and a pretty steep YPP margin, there are decent odds that Iowa will look back on 2011 as a transition year of sorts.

The 2011 season will shine a light on the future of the Iowa program. With sophomores like Marcus Coker and James Morris already having made names for themselves, and with so many other sophomores who played at least minor roles in 2010, the future will be on display. A division title run would make the Hawkeyes potentially heavy division favorites in coming years, but really, simple progress is the key. Avoid a crippling backslide, make a decent bowl (not hard to do with the Big Ten's bowl affiliations) and build for 2012.