Andrew Luck's Beard Is A Wonderland

Share All sharing options for: Andrew Luck's Beard Is A Wonderland

Heisman frontrunner Andrew Luck has a beard now. Like Sasquatch, pictures of it are fuzzy, and give us little insight into the beard's anatomy or structural integrity. Still, as SBNation's resident facial hair correspondent, I will do my best with the limited evidence we have. 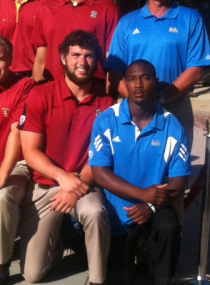 First: Andrew Luck clearly has not had his Golden Spike moment.

A beard and mustache meet like the tentacles of a mighty railroad, and at that juncture you become a full grown, beard-having man. Luck may be a future first round draft pick, but no signing bonus can bridge the sad, lonely void between his Stanbeard and Cardistache. 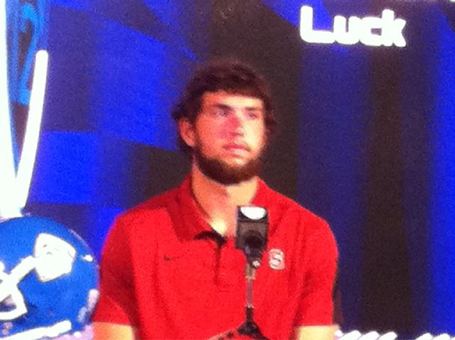 Luck also suffers from an abundance of neckbeard, giving his beard a strong hint of Amishness. He may not ever be a proper lumberjack with that beard, but he can certainly raise a good-sized barn with any lumber you bring him. Failing the Amish comparison, Luck has grown a beard that automatically qualifies to hang out as a pottery student in Bend, Oregon for a few years, just figuring things out and living, you know?

Finally, Luck suffers from an unfortunate condition where his beard grows out, rather than down, thus giving him the impression that he is wearing a beard made of angry honeybees or iron filings stuck to his magnetic face. If he lets it grow long enough and teases his hair out, it will make him look like a Goth lion who dyed his mane black to reflect the sadness of the world.

P.S. WHAT THIS BEARD MEANS FOR HIS PROFESSIONAL PROSPECTS: OMG he's going crazy! Downgrade to unsigned free agent! Or not, since it's just a beard. But go ahead and watch someone say it, since Matt Leinart was unshaven all the time in college, and [REALLY STUPID DRAFT GUY COMMENT GOES HERE.]