Explosive on offense and deep with decent talent on defense, Bobby Petrino's fourth Arkansas squad should be solid and exciting despite the loss of Ryan Mallett. "Solid" isn't good enough to win the SEC West, of course, but that's life in the Southeastern Conference.

NOTE: Confused? Don't miss the definitions and footnotes at the bottom. As always, if you don't like numbers, just skip to the words. And be sure to purchase your Football Outsiders Almanac 2011 today! The college portion is available for just $5, and if you pre-order the entire book, you can download the college portion instantly.

There was a fantasy going around Big 12 country during those four hours or so this past May (or was it June?) when the conference was harmonious and happy. Have Jerry Jones throw down silly money to try to entice Arkansas and another team (Notre Dame? Notre Dame! Yes!) into joining the fray, and voila, the Big 12 is a mega-power! Time to act and not react! Get on the phone with Jerry!

Of course, there were two flaws in this plan. 1) The window of harmony closed a few hours later when everybody in the Big 12 remembered about the Longhorn Network, and the sniping began again. 2) Nobody -- NOBODY -- leaves the SEC. No matter how scary life may be dating the supermodel (and to be sure, life hasn't always been easy for Arkansas in the hilariously rugged SEC West), no matter what kind of trouble she gets into, and no matter the, uh, pressure to perform (I'm regretting this analogy already) ... unless your name is Bobby Dodd, you don't dump her. She dumps you.

To be certain, Frank Broyles is not Bobby Dodd. Broyles is and has always been a bottom line kind of guy, and whatever your bottom line is -- ticket sales, TV ratings, wins, or cold hard cash -- the SEC is where you will find it. The long-time UA athletic director knew what he was doing when he steered Arkansas away from the Southwest Conference (Texas' first divorce) and into the SEC two decades ago. The schedule may be terrifying and unforgiving, wins may be hard to come by, and the stakes may be ridiculously high. But at this point, Arkansas wouldn't have it any other way.

Arkansas fielded one of its best teams in decades this past season, but they were still only the third-best team in their own division. Time to rally the troops and try again in 2011.

Arkansas was one of six teams in the country to play well enough to beat a perfectly average team every single week of the season. (The others: Auburn, Boise State, Ohio State, Oklahoma State and TCU.) And aside from a three-week span in October, they played well enough to defeat said average team handily each week. Granted, you don't play many average teams in the SEC West, but the Hogs were still good enough to not only survive in the division that produced the nation's No. 1 and No. 3 teams (according to F/+), but also win ten games for just the second time since they moved to the Southeastern Conference.

In the end, Arkansas won all ten games they played against teams ranked outside of the Top Five (No. 5 Ohio State, ridiculously allowed to play with their suspended players, took them out in the Sugar Bowl), featuring a competent defense and a nuclear offense. Though some stars have departed, quite a few explosive pieces return for 2011. Granted, they are still in the same division as Alabama, Auburn and LSU, and that will probably limit their level of success, but all Bobby Petrino can do is throw a ton of great athletes onto the field and hope that the breaks go their way one year. 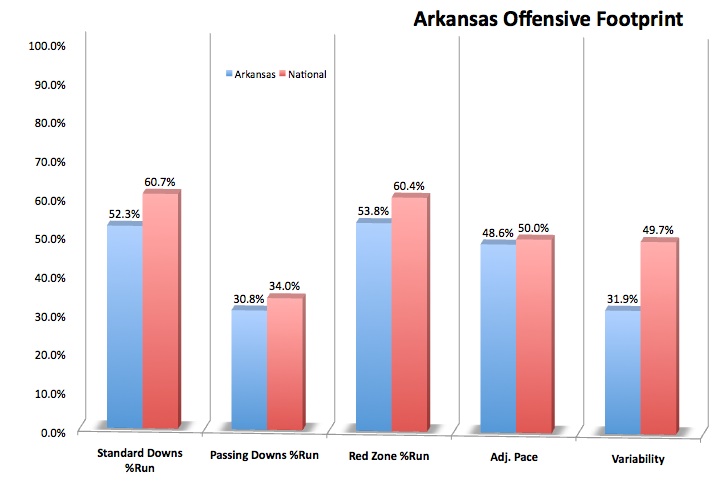 Of that main crew of difference makers, only Mallett, Williams and all-conference tackle DeMarcus Love depart. The top three running backs and top four wide receivers are all back, giving last year's backup quarterback Tyler Wilson (453 yards, 8.9 per catch, 67% completion rate, 4 TD, 3 INT) all sorts of weapons with which to play. The second-most explosive offense in the country last year might regress a bit without Mallett's hand cannon, but Wilson should keep the car running in at least fourth gear.

Granted, it came with some occasional sack problems, but no offense in the country was more aggressive with the downfield passing game than Arkansas. Four of their top five targets averaged at least 14.3 yards per catch an 10.4 yards per target. That's ridiculous. Mallett may have certain mockable qualities, but wow, does he have an arm. Wilson's initial numbers were rather similar -- he had a completion rate two percentage points higher and a per-pass average of 0.5 fewer yards -- but over the long haul we'll see if the aggression in the passing game gets dialed down a notch or two. 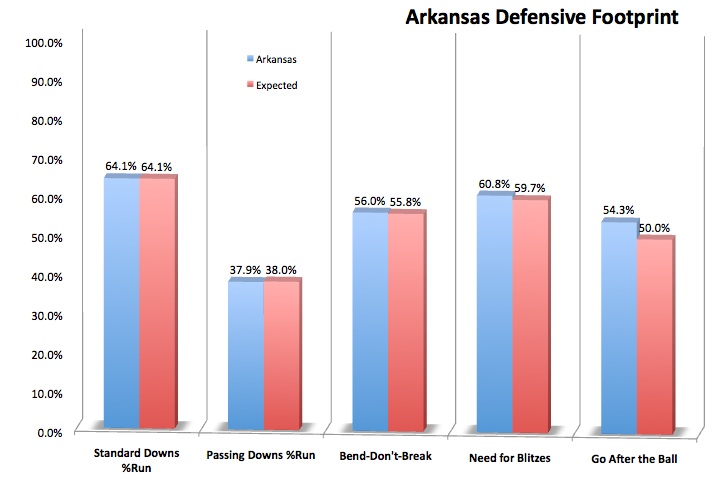 For obvious reasons, the Arkansas offense got a lot of headlines. But the defense still had to be good enough to win games. This was far from the best unit in the SEC, but clearly it got the job done against non-Top Five teams, and it did so while cycling through a large rotation of players. Eight experienced linemen, six experienced defensive backs and four experienced linebackers return for a squad that attacked constantly and game-planned very well. Can they take another step forward in 2011?

Arkansas had a defense that was better in the first and third quarters than in the second and fourth. I tend to regard that situation as one in which the gameplan and adjustments were good, but perhaps the athleticism and conditioning weren't quite solid enough to sustain the quality as the game progressed. Arkansas had the best defense in the country in the third quarter, but they were below-standard in the fourth. I can't imagine this was a problem with conditioning, not considering the massive number of players defensive coordinator Willy Robinson rotated in and out.

"Brown Sugar," by Rolling Stones
"Brown Sugar (Fine)," by Mos Def
"I Want A Little Sugar In My Bowl," by Nina Simone
"Pour Some Sugar On Me," by Def Leppard
"Sugar Baby," by Bob Dylan
"Sugar Blaster," by The Starlight Mints
"Sugar Free Jazz," by Soul Coughing
"Sugar Mama," by John Lee Hooker
"Sugarcube," by Yo La Tengo
"Sugartown," by North Mississippi Allstars 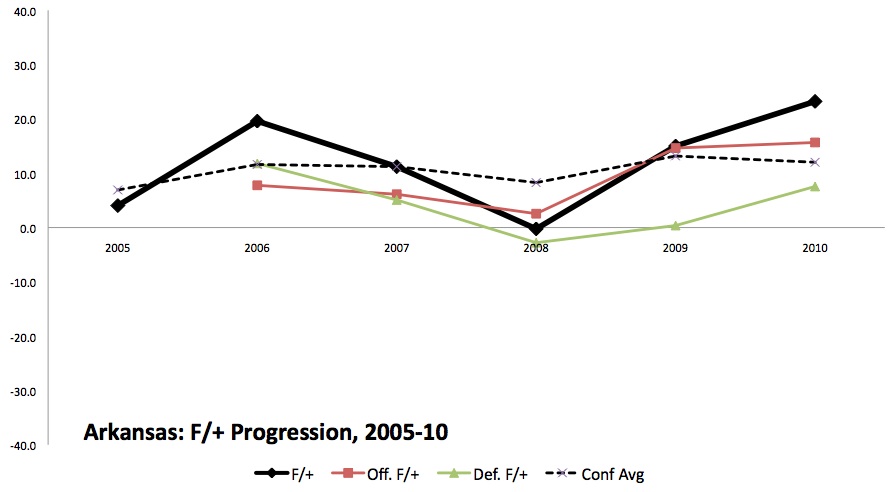 This year's Arkansas Razorbacks are projected to play like the ninth-best team in the country in this year's FOA 2011. Incredibly, this places them in the lower half of the SEC West (thanks to some unlikely, high Auburn projections). Alabama projects at No. 1, Auburn No. 4 (championship teams typically don't completely fall apart the next season, but they also don't typically lose what Auburn lost) and LSU No. 5. That is just insane.

Already the team with the most consistently difficult schedule in the country, the Hogs won't see a slate any easier this fall. After a couple of warm-ups against Missouri State and New Mexico (a team potentially worse than Missouri State) and a home game against a decent Troy team, the challenges begin. In back-to-back-to-back weeks, they face No. 1 Alabama in Tuscaloosa, No. 28 Texas A&M at Jerry World and No. 4 Auburn in Fayetteville. After a couple of tricky trips to Ole Miss and Vanderbilt, they host No. 13 South Carolina, No. 44 Tennessee and No. 32 Mississippi State before finishing up against No. 5 LSU in Baton Rouge. F.O. projects them to go 9-3 with a Top 10 team. But that's the bed they made when they came to the SEC, and again, they wouldn't have it any other way.