The hire of Al Golden to lead Miami may not have knocked the socks off of too many fans or analysts, but after a few years of wringing every last drop of potential out of the Temple program, he might be the perfect coach to do the same for the potential-laden 'Canes.

Share All sharing options for: 2011 Season Preview: Potential, Production And The Miami Hurricanes

NOTE: Confused? Don't miss the definitions and footnotes at the bottom. And as always, if you don't like numbers, just skip to the words. The theme for the week is legacy, with Miami (restoration), South Florida (creation), Nebraska (preservation) and Texas Tech (development) coming to the plate.

I talk a lot about college football's ruling class in these previews, how success breeds success, how the clique doesn't typically let in new members, etc. For Miami, however, 20 years of success have not necessarily laid the groundwork required for future success.

The U was an outlaw program, not only because of the way its players acted on the field, but also because it became a power in the first place. Both Miami and Florida State sneaked in the door in the early 1980s, when powers like Alabama and Ohio State were in transition, and USC and Oklahoma were taking miniature steps backwards. (From 1980-84, five straight first-timers won national titles: Georgia, Clemson, Penn State, Miami and BYU.) With football booming in the state of Florida and charismatic recruiters Howard Schnellenberger and Bobby Bowden in place, the 'Canes and 'Noles assumed a seat at the big boys' table for a number of years. But while Florida State remains one of the perceived elites, they have the alumni and administrative support to back it up. Support and facilities at Miami are not what you typically see within the ruling class, and without a stable infrastructure, Miami is not guaranteed success in the future. Members of the ruling class are typically just one hire away from returning to greatness; in 2011's college football world, Miami might need more than that.

That said, they may have brought in a coach who is perfect for providing what they were lacking under Randy Shannon. How far he can take Miami remains to be seen.

Few teams in the country were more frustrating than Miami in 2010. They consistently hinted at their strengths (gorgeous deep balls, efficient defense) while completely convincing you that they were never going to overcome their weaknesses (stupid interceptions, passing downs breakdowns). Wonderful offensive performances were consistently done in by turnovers, and a team that could have won double-digit games couldn't get out of its own way.

In the end, you are judged by the final results. The potential you show doesn't necessarily matter if you are not able to convert that to wins, and even if Miami played at a mostly high level, 7-6 is 7-6. In terms of missed potential, it makes sense that Miami eventually zeroed in on Al Golden, a coach who milked every last ounce of potential out of a Temple program that hadn't won in a long time. If Golden can coax Miami's current personnel out of its collective shell while bringing in reasonably high-caliber recruits (so far, so good in that regard), then he could be the perfect man for the job. 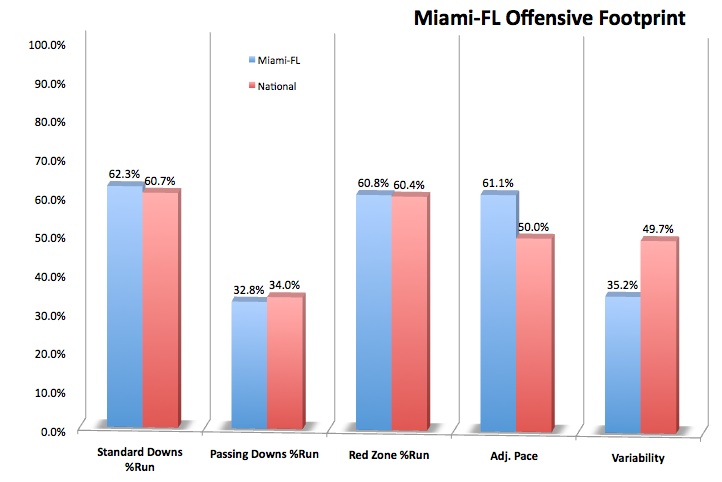 As long as they stayed on schedule in standard downs, Miami's offense was as good as it was supposed to be. Even with upheaval at the quarterback position, first-and-10 was the Hurricanes' friend. Former offensive coordinator Mark Whipple was fantastic in terms of game-planning and play-calling, but he found himself out of work at the end of the season because, among other things, Jacory Harris (1,793 yards, 6.6 per pass, 55% completion rate, 14 TD, 15 INT) failed to actually develop in his two years as a starter. He was as good at the beginning of 2009 as he was at the end of 2010 (his mid-season injury last fall certainly didn't help); when opponents adjust to your tendencies, you have to adjust back, and to date, he hasn't. Then again, part of this might have had to do with Whipple; when Harris went down against Virginia, Spencer Whipple (54 yards, 4.5 per pass, 50% completion rate, 0 TD, 2 INT) came in and threw two picks himself. He was replaced by Stephen Morris (1,240 yards, 8.1 per pass, 54% completion rate, 7 TD, 9 INT), who was even more aggressive, for better or worse, than Harris.

In 2011, the winner of the starting quarterback job, be it Harris, Whipple or Morris -- the early money is on Harris -- could benefit from a strong, dedicated run game. 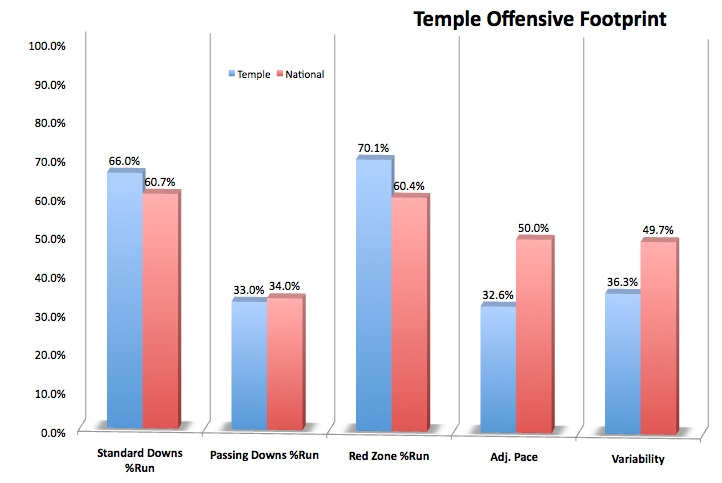 To learn more about Golden's tendencies at Temple, and Temple's 2011 prospects in Temple's absence, be sure to read "The Temple Owls, Inspectah Deck And The Surreptitious Mister Bob Davie."

Something else in solid shape: the offensive line. Despite the loss of left tackle (and second-round draft pick) Orlando Franklin, nine members of the two-deep (and 73 career starts) return. Miler and James could rack up serious yardage running to their right behind all-conference guard Brandon Washington and freshman All-American Seantrel Henderson.. Throw in left guard Hartland Gunn, center Tyler Horn and 2009 starting tackle Joel Figueroa, who missed most of 2010 to injury, and you've got five players with solid starting experience. The line was strong in 2010 and might be even stronger this fall. 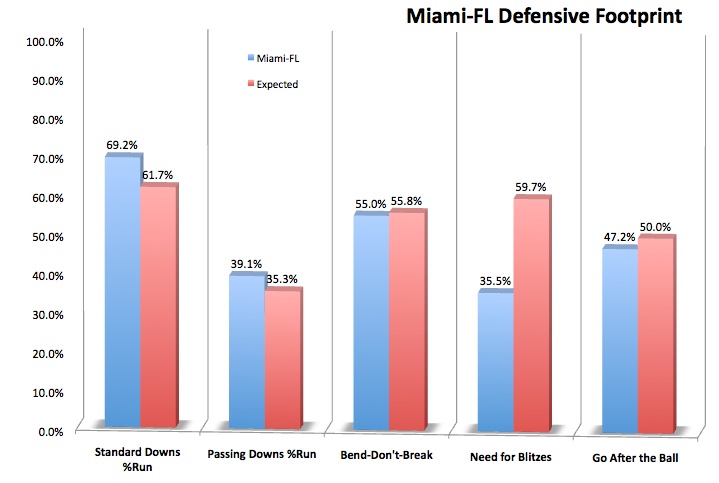 While Fisch inherits quite a few unknowns on offense (Will Jacory Harris learn how not to throw picks? Will any receivers beyond Travis Benjamin develop? How much will the 'Canes miss Storm Johnson?), new defensive coordinator Mark D'Onofrio is inheriting a much more favorable situation. Miami has seen its overall depth hurt by transfers and flame-outs in recent years, but the two-deep on D is strong, especially the closer you get to the line of scrimmage.

D'Onofrio's Temple defense generated a great pass rush without blitzing and bent as far as possible without breaking. He could have something similar with a Miami line that could be absolutely outstanding. Like Temple, Miami's line generated quite a bit of pass pressure on its own; eight linemen registered at least 3.0 TFL/sacks, and six are back. Few teams in the country have a better pair of play-makers at the tackle position than the 'Canes -- Micanor Regis and Marcus Forston combined for 57.0 tackles, 20.0 TFL/sacks and a pair of interceptions. Not every defense aims to have 20-TFL capability at tackle, but Miami has it. The ends, meanwhile, go four-deep with Olivier Vernon (10.5 TFL/sacks), Adewale Ojomo (7.5 TFL/sacks), Marcus Robinson (5.0 TFL/sacks) and Andrew Smith (4.0 TFL/sacks). End Allen Bailey (11.0 TFL/sacks), a third-round draft pick, was good, but this crew shouldn't miss him too much.

The line might be the strongest unit, but the linebackers aren't far behind. There isn't great depth here, but Sean Spence (85.0 tackles, 17.0 TFL/sacks, 2 FF, 6 PBU) and Ramon Buchanan (43.5 tackles, 8.0 TFL/sacks, 1 INT) are capable of posting some semi-ridiculous stats in either playing close to the line of scrimmage or dropping back to cover the pass. (Buchanan is capable of ridiculousness of another type as well: he tried an NWA line -- "F*** the police" -- in 2 Live Crew country back in March.) Middle linebacker Kelvin Cain (10.5 tackles, 1.0 TFL/sacks) showed at least a smidgen of potential as a freshman backing up since-departed Colin McCarthy (85.0 tackles, 10.5 TFL/sacks), and former blue-chipper Jordan Futch still has one more year to live up to his supposed potential.

How about "Frustrated" by The Knack? Yes, The Knack. 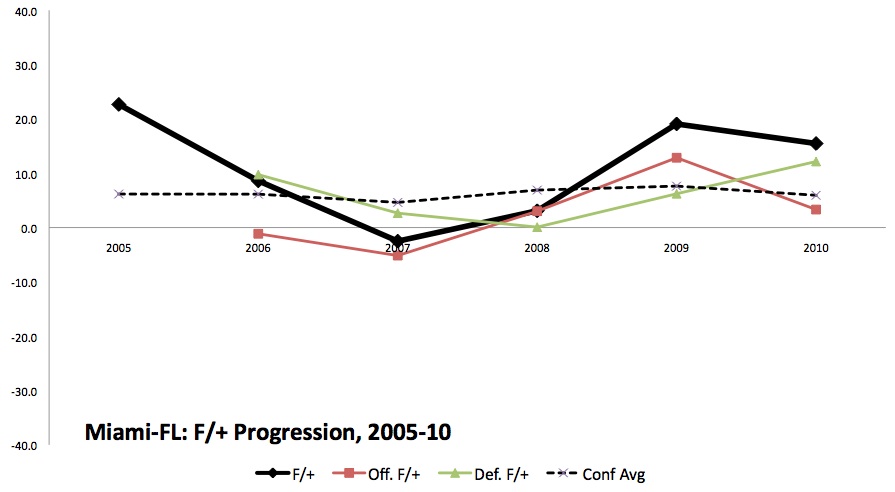 There has been a decent amount of negativity surrounding the Miami program recently, from the disappointing 2010 season, to a coaching hire that failed to generate buzz, to arrests and transfers. The vaunted 2008 recruiting class did not bring 12-win seasons to Coral Gables, the depth isn't where it is supposed to be, and financial support appears lacking. This program is not where it was 10 years ago or 20 years ago, and looking at the program, and college football's power structure, it is difficult to imagine the 'Canes returning to those loftiest of lofty heights anytime soon. However...

...look at that 2008 class again. It still produced Marcus Forston, Sean Spence, Travis Benjamin, Ramon Buchanan, Vaughn Telemaque, Micanor Regis, Brandon Washington and, of course, Jacory Harris. Within the framework of the ACC, Miami is still at the top end in terms of athleticism and potential. Al Golden may be seen by some as a conservative hire, but if he manages to wring out more of the potential in some of these players than they have as yet uncovered, Miami is still a potential ACC champion and Top 10 program.

The schedule is, to say the least, trying. The 'Canes open on Labor Day at Maryland, then host Ohio State and Kansas State before the ACC schedule truly gets rolling. Their divisional fate will be decided by trips to Virginia Tech and North Carolina in mid-October, and by the time they reach the @FlaSt-USF-BC portion of their schedule, they could be anywhere between about 8-1 and 3-6. I've talked myself into this team to a certain degree, and I see them winning at least eight games when all is said and done, but 'potential' is the watchword. If we're still talking about potential, and not production, in November, then something went awry.