South Florida has been rather consistent in the win column recently. Is there room for them somewhere near college football's ruling class? And can Skip Holtz engineer a surprise season with a questionable offense and a confusing front seven?

NOTE: Confused? Don't miss the definitions and footnotes at the bottom. And as always, if you don't like numbers, skip to the words.

This is college football. It took almost 100 years for the powers that be to decide that finishing the season with a "No. 1 vs No. 2" matchup wouldn't be the end of the world. (Since the playoffs argument has only been going on for about four or five decades, then, we've got a ways to go.) Teams that were powers in the 1930s (Alabama, USC) are powers now. You play in the same stadium and sing the same fight song that you did 50 years ago. (And in one case, you take orders from the same coach, too.) It is perhaps the greatest, most change-fearing sport on the planet.

Through this lens, it is amazing to know that South Florida is even allowed to be a BCS conference team. They weren't a team, period, as late as 1996. That they have been to six straight bowl games, ranked in the Top 10 in two different seasons (including a brief peak at No. 2 in 2007) and finished .500 or better in 10 of 11 seasons is a damn impressive accomplishment. Jim Leavitt set the table nicely, and following Leavitt's awkward dismissal last year, Skip Holtz kept the train rolling in 2010. The Bulls have won either eight or nine games for five consecutive seasons, but as I've said before, a plateau of any kind, even a pretty good one, bores fans after a while. Can Holtz figure out how to crack the glass ceiling and advance South Florida into the land of double-digit wins?

When Miami and Florida State rode the ridiculous depth of Florida talent to greatness in the late-1970s and early-1980s, there was a vacuum in college football. Miami sneaked in the door and stayed in football's ruling class for most of two decades. Meanwhile, Florida State's still probably in the ruling class, and Florida has been the most consistently strong program in the country over the last five years. So with no power vacuum of which to speak and competition for Florida talent at an all-time high, what kind of ceiling can USF establish, under Holtz or anybody else? The Bulls are in the right conference for stealing a BCS bid at some point, but winning an iffy conference and being a truly strong national program are two separate things. Is there room for USF near (definitely not at) the top? 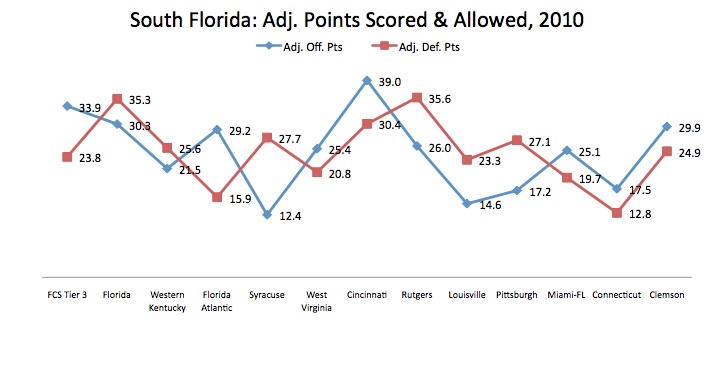 South Florida gained and allowed exactly the same average of Adj. Points per game in 2010, but the season was anything but even and consistent. The Bulls' offense played at an above average level in three of their first four games, then alternated between horrid performances (Syracuse) and great ones (Cincinnati). They limped home down the stretch, averaging just 20.0 Adj. PPG over the last five games, then played well in the bowl game.

The defense, meanwhile, was just as inconsistent. They were great against Florida Atlantic, Miami and UConn, good against Stony Brook, Western Kentucky, Louisville and Clemson, and iffy-at-best the other half of the season. This team was young in key areas and learning how to play for a new coaching staff; that is just about the only explanation I can conceive for the fact that USF established almost no trend, good or bad, all season. They didn't progress, and they didn't regress -- they just ended the season about where they started it. 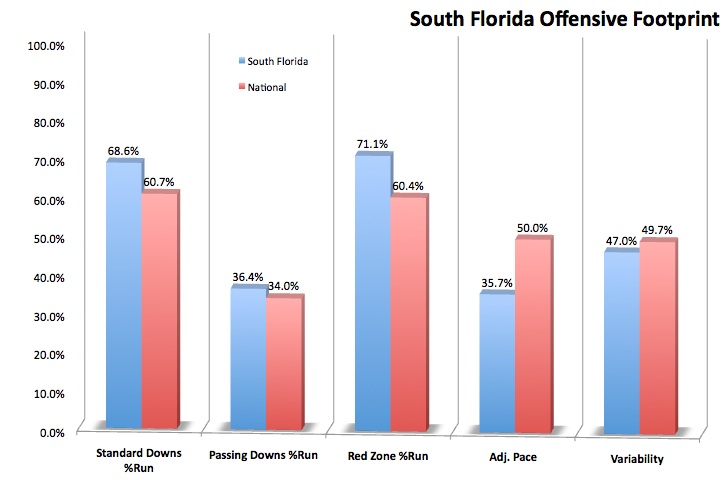 South Florida's offense was downright Holtzian in 2010. They loaded up on the run on standard downs, loaded up even more on the run in the red zone, played at a plodding pace, and mixed in some occasional deep balls, often off of play action. The execution up front was strong, but the talent at running back simply wasn't what it needed to be to make the engine run.

There is no guarantee that this problem will improve in 2011. Leading rusher Moise Plancher (793 yards, 4.5 per carry, -6.4 Adj. POE, 5 TD) is gone, but backup Demetris Murray (542 yards, 4.5 per carry, -6.5 Adj. POE, 4 TD) was an extremely similar back, statistically, and should at least match Plancher's production. But if USF is to exceed that level of production in 2011, the major impact might have to come from a newcomer(s). First, you've got Darrell Scott, the erstwhile five-star, No. 1 back from the 2008 class who chose Colorado and accomplished very little (-6.6 Adj. POE). Then you've got Dontae Aycock, a four-star back from the 2009 class who was dismissed from Auburn and landed in St. Petersburg. At the very least, there are options (especially when you throw in sophomore Marcus Shaw), whether the running backs unit has become a relative strength or simply less of a weakness.

Bulls fans should hope the running backs have become a strength because last year's strength, the offensive line, gets weaker in 2011. Gone are all-conference center Sampson Genus and second-team tackle Jacob Sims, along with left tackle Jamar Bass. The three started for a combined seven seasons, and considering how much better USF's line stats were than the rest of their offensive numbers, this has to be cause for alarm. Two two-year starters do return -- guards Jeremiah Warren and Chaz Hine; in all, the unit returns 53 career starts, so life could be worse. Still, any regression could be problematic for an offense that was average-at-best last year. 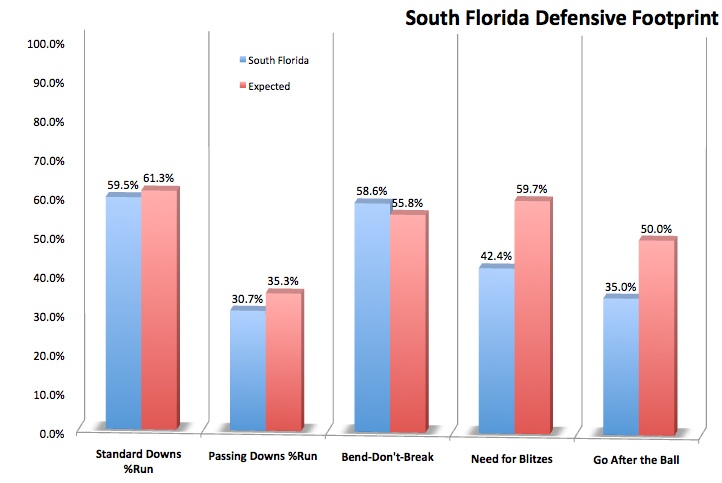 During the lengthy Jim Leavitt era, defense was rarely an issue. Even in lesser years, the Bulls fielded an above-average D. They regressed a bit in 2009, but Holtz was able to implement at least minor improvements in his first season.

They suffered from a pretty severe case of misplaced aggression, however. Few defenses were as good as the Bulls were on standard downs and as bad as the Bulls were on passing downs. Opponents very much did not fear the USF blitz, apparently; they passed a ton on passing downs, and they had great success in doing so. USF's strong standard downs sack rates disappeared on third-and-long for some reason. As a result, USF showed quite a few bend-don't-break tendencies, though that was likely involuntary.

The stats suggest that the linebackers were the strength of this USF defense -- the trio of Jacquian Williams, DeDe Lattimore and Sam Barrington combined for 169.0 tackles and 24.0 TFL/sacks, showing nice sideline-to-sideline efficiency against the run. Williams is gone, but Barrington (52.5 tackles, 6.5 TFL/sacks, 2 FF, 3 PBU) and Lattimore (58.0 tackles, 6.5 TFL/sacks as a redshirt freshman) return. They are supplemented by Mike Lanaris (22.5 tackles, 3.5 TFL/sacks, 2 INT) and Curtis Weatherspoon (20.0 tackles).

The linebackers might be responsible for a bit more this year, as there is quite a bit of turnover on the line. At end, Patrick Hampton (7.0 TFL/sacks) and pass rush specialist Ryne Giddins (6.0 TFL/sacks as a redshirt freshman) take over for Craig Marshall (9.0 TFL/sacks in nine games) and David Bedford (34.5 tackles, 4.0 TFL/sacks). At tackle, Terrell McClain (21.0 tackles, 4.5 TFL/sacks) leaves a void Cory Grissom (3.0 TFL/sacks) and Keith McCaskill (4.0 TFL/sacks) must fill. This front seven was confusing in 2010 -- semi-light and fast, but not very good at pinning their ears back and attacking when they were supposed to -- and barring huge sophomore leaps from Lattimore and Giddins, it might be more of the same in 2011.

USF's freshman year of football (1997) was also my freshman year in college, and there's no way in hell I'm going to pass up an opportunity to reminisce.

Ten Great Songs From 1997
"Cold Irons Bound," by Bob Dylan
"Faded," by Ben Harper & The Innocent Criminals
"Going Back to Cali," by Notorious B.I.G.
"Guess Who's Back," by Rakim
"On and On," by Erykah Badu
"Paranoid Android," by Radiohead
"Passion," by Pat McGee Band
"Song for the Dumped," by Ben Folds Five
"Stockholm Syndrome," by Yo La Tengo
"Triumph," by Wu-Tang Clan 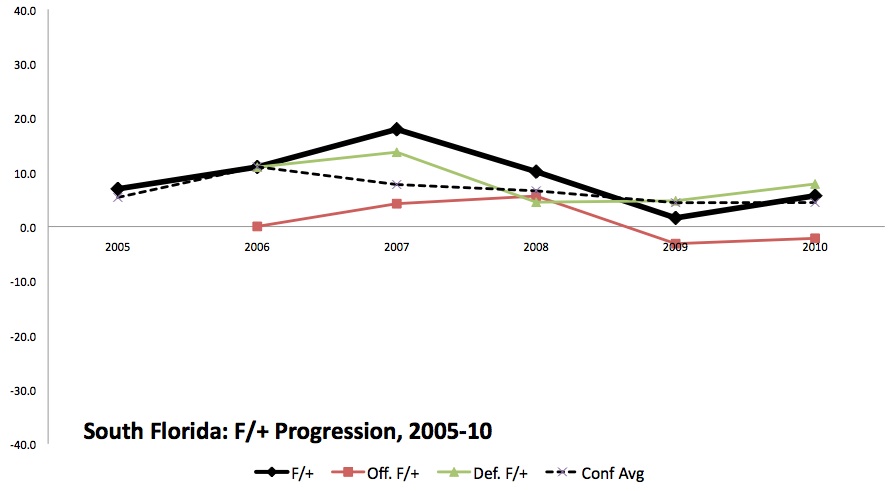 I think USF's a year away. In this year's publication, Phil Steele picked the Bulls to surprise and finish tied for first in the Big East, but I just can't really see it. They had some fumbles luck, and their YPP margin suggests they were a bit lucky in regard to efficiency. They do not return a lofty level of experience, especially on offense, and ... I just don't see it. I see a young offense lacking in receiving threats and a confusing front seven on defense, but I see a seventh consecutive bowl game, seven or eight wins and a wonderfully experienced team that heads into 2012 with big expectations.

That said ... if they survive a brutal mid-season stretch that sees them play one home game in 55 days, and if they reach the home stretch with a chance at the conference title, all bets are off. But good luck with that. After a likely 3-1 start, the Bulls are staring at an @Pitt-@UConn-Cincy-@Rutgers-@Syracuse stretch. That's five potential bowl teams, four away from home. That they finish with home games against Miami, Louisville, and West Virginia is nice, but their title hopes will probably be dead by then. The pieces in place should make for another up-and-down season, but the pieces that will still be in place next year are intriguing.