SEC Media Day is about seeing who can make the most absurd statement...Les Miles, Houston Nutt or Steve Spurrier.

Big Ten Media Day is about the puppet from Saw announcing how he's going to single-handidly change college football with his own bare hands.

Big 12 Media Day is about finding out how Dan Beebe was somehow able to keep his conference stitched together for one more season with silly putty and chewing gum.

Big East Media Day, however, is really only about one thing. The Monday Night Clambake, which, is a bit of a misnomer because everyone knows it's all about the lobsters (via Steve Politi)... 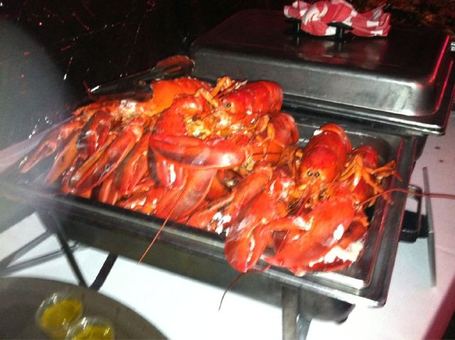 Every year the players, coaches and media on-hand devour untold (and ungodly) amounts of lobster. The most ever eaten in one sitting is rumored to have been nine by Rutgers' Brian Leonard in 2007 and since then no one has come close.

Until this year, when South Florida's 327-pound offensive lineman Jeremiah Warren sat down, strapped on a lobster bib and went to work. Four, five, six, seven...Warren conquered them in quick work and went looking for the all-time record. And then tragedy struck... 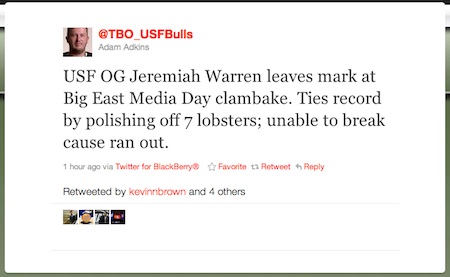 Who put this event together, Jim Burr? How do you run out of lobster at a clambake attended by very large, very hungry football players? Some of these guys have been training for this event for weeks*! This would be like the Outback Bowl players' dinner running out of steaks. Unacceptable, Big East. Totally unacceptable. Somewhere in here there's a joke about John Marinatto and god-awful planning.

Poor pre-planning and an inability to finish well? Sure sounds like the Big East Conference to me.

Follow along with Big East Media Day at our stream as well as at Big East Coast Bias.

Big East Media Day 2011: No TCU Yet, No Wannstache, No Problem