Share All sharing options for: How The Iowa Hawkeyes Could Honor A Navy SEAL (And His Legendary Dog) 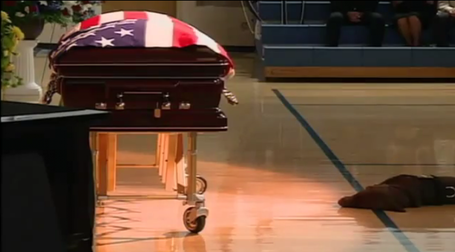 You've probably seen the photo above (or maybe this video) at some point over the past few days, but in case you haven't, it's from the funeral of Jon Tumilson, a fallen Navy SEAL, and on the ground next to him is his dog, Hawkeye. As one account notes:

The video shows Tumilson’s friend Scott Nichols walking to the front of the room to give his eulogy with Hawkeye following close behind.

Hawkeye then dropped to the ground, and according to several eyewitness reports, let out a giant sigh. Hawkeye stayed in the same spot next to the casket throughout the funeral

...And if that doesn't make your eyes water a little bit, you may not have a heart. Now, there's a chance that this story could have a happier post-script, and it involves Tumilson's favorite team, the Iowa Hawkeyes. 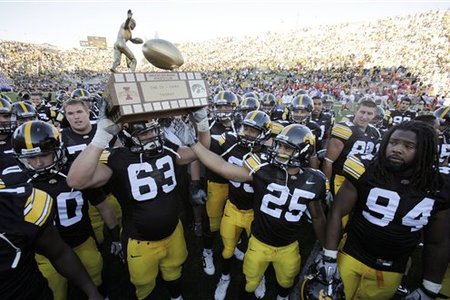 Hawkeye, the dog named for a football team could soon be leading the actual Iowa Hawkeyes football team out of the tunnel. It won't bring Tumilson back, but it'd be a classy way to honor a fallen hero, showcasing the dog who was named to honor his owner's favorite football team.

More from the Des-Moines Register:

"It just tears you apart to see that (video)," Lazar said Friday morning. "But I thought how great it would be for that dog to lead the Hawkeyes down to the field and to have the announcer tell the story of this dog."

It's a great idea and a creative way to pay respect to Tumilson's sacrifice, and most importantly, it could help turn a terrible tragedy into a symbol of something happier, even for a few minutes. If a football team can play a role in helping honor Tumilson's memory, and maybe even help mourners heal, here's to hoping it happens ASAP.