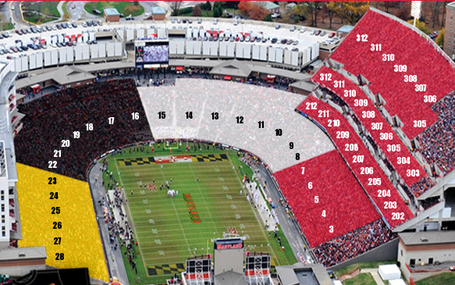 The University of Maryland, brought to you by Under Armour, would like to deploy each of its eleventy official colors in a daring crowd color scheme that makes Iowa's bumblebee stripes game look like it wasn't even brought to you by Under Armour or something! They should build another stadium on top of this stadium so the whole thing looks like Under Armor's logo, and make everybody wear blue and gold and purple to that game.

The only thing that would make this look even prettier is if a bunch of people in green and orange showed up OH GOOD.