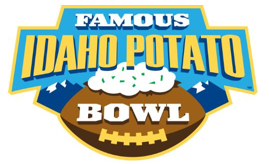 You're looking live at the only bowl theme that could conceivably convince Brent Musburger to call a MAC-WAC contest. Who would turn down the chance to remind the people of western Ohio and Hawaii just how many potato skins are at stake? How many potato skins, by the way?

All of the potato skins.

The Famous Idaho Potato Bowl is a real college football game. It really is replacing the Humanitarian Bowl on Boise State's field, and it really does deploy that logo, which was able to swipe the Mountain West Conference logo's mountains. Continuity geeks will be relieved to note the streak remains alive: "the nation's longest-running outdoor cold-weather Bowl" is back for another year.

If you're looking for puns, you'd be wise to catch up with Andy Staples, who's been chronicling them as they break. The bowl's press release itself is rich enough with enjoyable lines for our purposes, as you can see here:

Four of the top five potato-consuming states are represented by the WAC and MAC conferences: New York, Ohio, Pennsylvania and Texas.

The Famous Idaho Potato Bowl continues the tradition of commodity-named bowl games with connections to a state's top agricultural export. The Orange Bowl, Sugar Bowl and Cotton Bowl all took their namesakes from products critical to their respective state's economic health.