2011 Season Preview: The West Virginia Mountaineers And We Know Drama

West Virginia was oh, so close to being an outstanding team in 2010, but in addressing their major weakness (offense), they created some incredible offseason drama. Has the soap opera subsided now that Dana Holgorsen has taken over the head coaching position?

Share All sharing options for: 2011 Season Preview: The West Virginia Mountaineers And We Know Drama

Say what you will about the quality of the Big East as a football conference. They haven't tamped down any "Weakest BCS conference" talk by getting repeatedly drubbed in BCS bowls (average score of last three BCS bowls: Opponent 40, Big East Champion 18) or by letting in the worst BCS bowl participant in recent history last year. But they do know drama.

Both Backyard Brawl participants, West Virginia and Pittsburgh, got creative in recent months, entering the offseason intending to have one head coach and ending up with another one. Pittsburgh hired Mike Heywood, then fired him amid domestic assault charges and ended up with Todd Graham. West Virginia, meanwhile, created an awkward situation by forcing offensive coordinator and "head coach in waiting" Dana Holgorsen upon head coach Bill Stewart, then was forced to deal with the awkwardness sooner than later when Stewart was found to be allegedly attempting to sabotage Holgorsen.

So now, instead of taking the field this fall with the hottest offensive coordinator in the game and a proven defensive staff, WVU is looking at life with a rookie head coach and a defensive staff brought to Morgantown by a head man who was just forced out of town. Maybe it will work out just fine, and maybe it won't, but either way we will be entertained. Holgorsen inherits an underrated program (their four-year performance rankings place them ahead of Auburn, Penn State, Georgia and all the other recent teams I've profiled) with interesting offensive talent and athletes abound, but the drama is not so far in the rearview just yet.

West Virginia showed just enough potential to be incredibly frustrating in 2010, especially on offense. The Mountaineers torched Maryland, UNLV, Pittsburgh and Rutgers and completely disappeared against Coastal Carolina, LSU, Louisville and N.C. State. The defense did all it could; the national average for points (and therefore Adj. Points) was 27.1 per game, and WVU "allowed" more than 22.3 Adj. Points just once all season. They were incredibly effective, but the offense scored just 12.0 real points per game in their four losses.

Through this prism, it is clear what appealed to WVU athletic director Oliver Luck regarding Holgorsen. He saw an opportunity to significantly upgrade the offense while maintaining a high level on defense, and he figured out a way to do it that didn't require him to fire his current head coach. The execution of the plan was egregious, but nobody will remember that if Holgorsen is able to pull off some good things in 2011 and beyond. 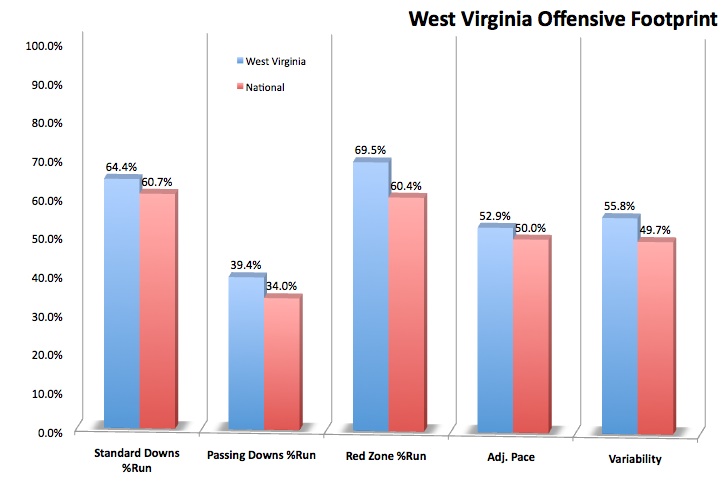 With a non-existent running game and an offense that offered no explosiveness on standard downs, WVU quarterback Geno Smith (2,763 yards, 7.4 per pass, 65% completion rate, 24 TD, 7 INT) was forced to make plays on passing downs a bit too much. While Smith was productive and interesting for much of the season, in specific games (basically the four losses plus the Louisville game) the pressure was too much, and he faltered. You could tell from his body language that things weren't going well, and he was unable to fend off prolonged in-game slumps.

Now a junior, Smith was likely ready to improve anyway; he is more mature, and he has a deeper, more experienced receiving corps at his disposal. But throw Holgorsen into the mix, and suddenly Smith is a favorite of the Fantasy College Football crowd. And it's not hard to see why. To see what he might do, let's take a look at Oklahoma State's Offensive Footprint from last year, when Holgorsen was calling the shots. 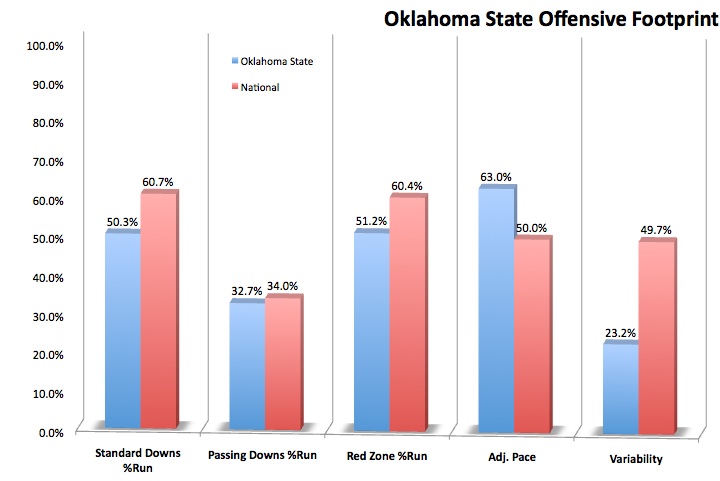 Holgorsen is not a 'pass all the time' guy, but he does put the game in his quarterback's hands a good portion of the time. He is unafraid of running the ball, especially on second-and-long situations (to set up more manageable third downs), and perhaps most notably, he sticks with the same approach no matter the situation or field position. Oklahoma State had the second-least variable offense in the country last year, which is a bit odd for spread attacks. Tulsa's variability, for instance, was off the charts; we may lump "spread offenses" together, but there are 1,000,001 ways to run the spread. 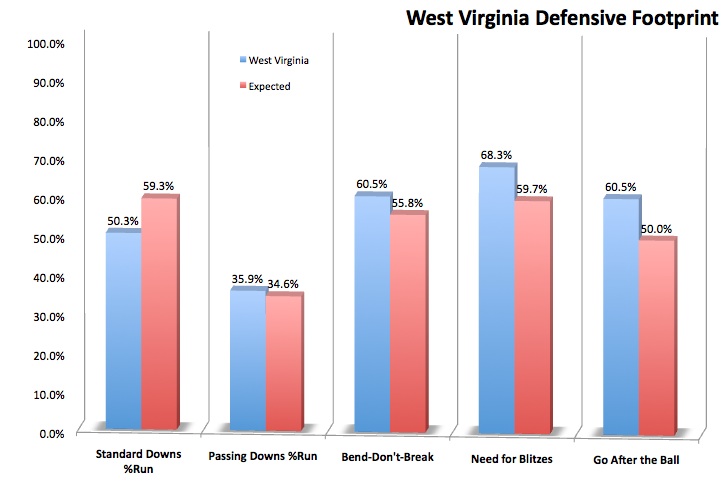 On paper, defensive coordinator Jeff Casteel's aggressive, unpredictable 3-3-5 attack could be the perfect match with a Holgorsen offense. Holgorsen wants to wear out opponents with pace and efficiency, and with a physical defense that forces quick, disastrous mistakes, they could stretch opponents even further. But two things give me reservations:

1) The departures of safeties Robert Sands (43.5 tackles, 6.5 TFL/sacks, 1 INT) and Sidney Glover (53.0 tackles, 7.0 TFL/sacks, 5 PBU) could be tough for a back line that prevented big plays as well as almost any team in the country. They do still return strong safety Terrence Garvin (58.5 tackles, 4.5 TFL/sacks, 4 PBU) and free-safety-with-potential Eain Smith (19.0 tackles, 1.0 TFL/sacks, 1 INT, 2 PBU), but Glover was great in 2010, and Sands was one of the most intimidating, bigger-hitting safeties in the country. It is at least something of a concern, as is the departure of two solid playmaking linebackers, J.T. Thomas (54.5 tackles, 7.0 TFL/sacks, 2 FF, 4 PBU) and Anthony Leonard (56.0 tackles, 6.5 TFL/sacks, 3 PBU). (I guess I could have just said "I have reservations about a defense that returns just four starters" and left it at that.)

2) This is just a gut feeling (from a numbers guy taught to hate gut feelings, no less), but ... honestly, it makes me a little paranoid that Holgorsen made no changes to his defensive coaching staff after Stewart left. It's easy to understand why he didn't -- coordinator Jeff Casteel is absolutely phenomenal at his job -- but considering the drama that unfolded between Stewart and Holgorsen, my antenna is a bit raised as it pertains to Holgorsen leading a staff that consists entirely of Stewart guys. Lord knows dumping random assistants could have resulted in a new level of drama, but I find it hard to imagine that the soap opera could completely end just because a single person left town. We'll see.

This is more applicable to the offseason, but ... how about a little "Drama" from RZA? "Selling The Drama" by Live? "Stop Being So Dramatic" by Jon Chinn? 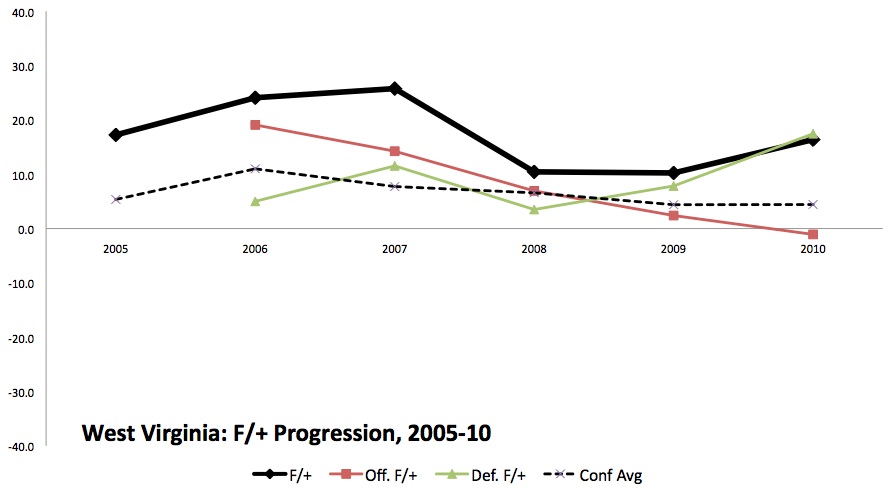 Despite the losses on defense, and despite my general paranoia (which, sadly enough, did not make the list of projection factors), the 2011 Football Outsiders projections see the Big East as a two team race between the two high-drama programs, Pittsburgh and West Virginia. WVU was quite unlucky last year, in terms of both YPP Margin and fumbles luck, but they still won nine games with a new starting quarterback. They were in position to take a nice step forward in 2011 even with Bill Stewart still in charge, and assuming the drama comes to a close, the pieces are still in place. Our projections give the Mountaineers a 56% chance of finishing 6-1 or better in conference (Pittsburgh: also 56%), and getting the Panthers at home on November 25 could swing the conference in WVU's favor.

Still ... and I hate to bring it up again ... do the Mountaineers have what it takes to overcome an odd offseason? If you believe at all in vibes or karma, you have to be a little concerned, right? Or should I just stick with the numbers and ignore gut feelings, vibes and all the other things I've been taught to ignore?