Road Trip: LSU Vs. Mississippi State, Where Bully Is Waiting For Something To Happen In Starkville

Spencer Hall went to Starkville and learned about the versatility of the cowbell, the virtues of embracing your countryness, and paid respects to a CGI Bulldog.

Share All sharing options for: Road Trip: LSU Vs. Mississippi State, Where Bully Is Waiting For Something To Happen In Starkville

Starkville has cowbells. You should understand that the cowbell is an instrument of nuance. In full throat, it sounds like you are sitting beneath a cascade of ladles raining down on an immense steel-plated floor. This can last for up to a minute, and when it catches the roof of the pressbox and rolls into your ears it will leave them ringing.

The cowbell is a versatile instrument, though. There is the brief flourish, used on moments like Chris Relf's long third down and 15 completion to Marcus Green. There is the sustained burst used on defensive stands, a hearty 10-15 second rattle. There are the rhythmic cadences pounded out to any number of the songs Mississippi State blows out their speakers to in between plays, an honor roll of bro-tastic squat day at the gym classics: "Click Click Boom" by Saliva, "Welcome to the Jungle" by Guns N' Roses, and "Who Let the Dogs Out" by the Baha Men.

The last song in that list was cranked without shame before the opening kickoff. The crowd cloinked along with each "WHO? WHOWHOWHO?" The Miss State players hopped in unison and pointed left, then right with the song's chorus, and for an instant you sort of forgot yourself for a moment, and forgot that this song was eleven years old, and that everyone was hopping up and down in a self-described cow town in Mississippi like it was the first time it had ever frazzled a pair of speakers. 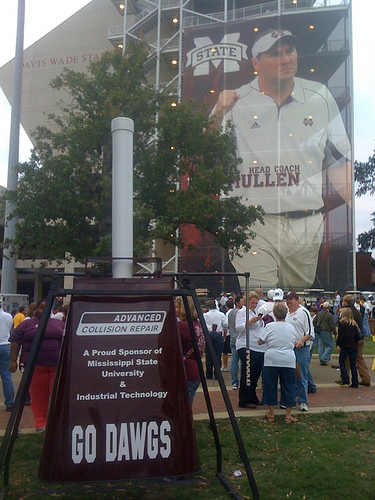 There is one last move in the cowbell's repertoire: the sad cowbell, as in the one or two confused fans who clang away in the silence following an LSU touchdown arcing into the hands of a wide receiver in the third quarter. I have no idea how you make an agricultural noise maker sound poignant, but you, random confused Miss State fan: you made that happen.

Starkville is a small town. Very small. There is a Western Auto store on the Main Street. If you do not know what this means, let Wikipedia help:

Even though Advance ordered all Western Auto signs removed from dealer stores by 2006,[14] there are still stores operating under the name and violating trademark-infringement laws across the country.

It is also an aggie school, a place where buildings proudly read "DAIRY" on them in the same way that Harvard's bear the names of baronial New Englanders. No one hides from any of this in Starkville: thus the cowbells, the boots worn by women and men as a kind of uniform on game day, and the golf carts with offroad tires everyone drives around the place like they are real viable forms of road-ready transportation.

They embrace the countryness. This can work for you. Finding the stadium is easy. It is the biggest thing in the skyline, and its only competition is the university logo-emblazoned water tower. I was trying to find my parking spot, and drove blindly up to the stadium. At any other stadium in the SEC, riding up in your car to the edge of the stadium and aimlessly wandering around would be tantamount to madness. In Starkville it is a real live strategy, and five minutes and three very polite law enforcement officers later, I was parked, untased, and getting settled in for the game.

Starkville also passes the random yelling test. To test the general hospitability of a city, I simply yell a question I have out loud to no one in particular. This sounds insane, but it works really well in not only finding the answers to things, but also in testing the social climate. I yelled out "WHERE IS GATE FIVE?" and got two very polite and accurate answers immediately. (Believe it or not, New York City scores very high on the Random Yelling Test hospitality charts.)

The only way Starkville not being citified even remotely inconvenienced me came when I ordered a redeye at the campus union Starbucks. The woman corralling the line of students in shorts and sweatshirts put her hand on her hip, cocked her head, and said "Oh, we on that stuff I don't know about?" She could have said "Oh you fancy, huh?" but it would have been less effective while saying the exact same thing. 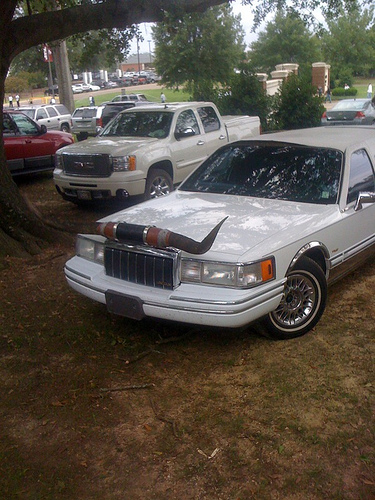 So it is country, and who the hell cares if it is. Starkville does not pretend to be anything it is not. There are two solid breakfast places, some quality barbecue at Petty's. If you want pretense, there are places to go, and Starkville is not one of them. Not even the Patron Saint of Miss State football Fred Smoot is big-timing it. It's simply not an option, and no one cares, including him. He parks his Rolls Royce at the Comfort Inn Suites just off campus in the same row with some bro's ginormous battered pickup truck with a Miss State sticker on one side and a Fish and Wildlife sticker on the other.

If a lack of pretension is the theme, LSU fit right in. Miss State tried little in the way of ornament, running the same five or six plays all night, and LSU responded in kind by bumping right up to Miss State's receivers and mauling their offensive linemen all night. Tyrann Mathieu played the whole night running downhill. Mo Claiborne jumped to the rim of the second deck to pick a long Relf play-action pass. LSU's defensive line rotation, already at an advantage with Miss State starting freshman Blaine Clausell at left tackle, really fell into a blood frenzy when guard Tobias Smith left with an injury.

And it would have been nice if Dan Mullen could have told Chris Relf to step up in the pocket and avoid the pressure, but there was a yellow helmet in the way, and it was pointed straight at Relf's teeth. It also would have been nice if Relf had rolled out to avoid the pressure, but that's where Barkevious Mingo was on third downs, all too happy to maul the fleeing quarterback. If he dislodged the ball, well that would be nice, but that was seemingly unrelated to what LSU's defense was bent on doing Thursday night.

They didn't seem so much interested in playing defense as they were in playing a kill-by-colors game that happened to involve a ball, pads, and helmets. If colorblind as a group, they would all currently be incarcerated for attempted manslaughter. This may be the best compliment you can every pay a defense in football, and you are welcome, LSU.

By the time a very controlled, poised, and nearly unrecognizable-in-his-calm Jarrett Lee dropped in a fade to put LSU up 16-6, the result assumed by violence on the field finally showed up on the scoreboard. Ten points might as well be twenty against this defense, and the LSU offense spent the rest of the night playing like it. They ran to bleed clock. They ran because running hurts the other team one installment at a time. They ran because Les Miles has now completed his transformation of LSU into a Bo Schembechler team, but not the grim Bo you know.  This Bo had a midlife crisis, moved to Louisiana, and picked up a taste for riverboat casino blackjack and women who liked their liquor neat and their guns well-greased and loaded.

The fundamentals are the same, but in this mutation of the species he wears Mardi Gras beads and calls ballsy onside kicks in the third quarter of an SEC road game. This Bo commutes in a sensible car, but takes the occasional ride with the Devil on weekends. This Bo is called Les Miles, and he is the most entertaining Schembechler avatar wandering the sidelines anywhere.

Postgame, and there is Dan Mullen, deep in the process of telling everyone about the process. One disadvantage of being small is that you need a process, and not the kind Nick Saban talks about at Alabama. At Alabama they have a brand with 13 (or 11, or 8, or however you count it, Alabama fans) championships. They have the machine in place to haul in talent from the state and beyond, and the booster army ready to prime its gears with the cash that got them $4 million for Nick Saban, and the money for facilities and stadium upgrades and all the other shiny things that make a proper football pimp's Cadillac.

For the moment, Mississippi State is still a pickup truck, and a durable one at that. Miss State made it two and a half quarters with LSU before losing its grip on the game. They would lose their 12th game in a row to LSU not because they allowed big plays, but because they were hammered down with the depth chart and superior stars, with the wealth of talent from the state of Louisiana and beyond honed to a heavy, dull battering ram by the tools of the LSU football factory.

Mullen appeared exasperated. This is his third year in Starkville. His team can go out and manhandle eighty percent of the teams in college football with the talent assembled here, and yet his only two wins in the SEC West have come against Ole Miss. Beating the in-state rival is nice, especially since local politics governs so much of what happens in college football, but Dan Mullen and Miss State can't step out onto their front porch in any direction in the SEC West without getting into a bloody fistfight.

The Bulldogs had six yards on their first six possession of the second half against the 2007 national champions and current No. 3 team in the nation. They came up one yard shy of beating last year's national and conference champions the previous weekend in a year when Auburn was starting a slew of freshman and replacing a Heisman winner at quarterback. Arkansas and Alabama loom on the horizon.  Mullen said in his postgame it might take five or 15 years to win a conference title at Miss State. Given the neighborhood, this isn't pessimism. It is realism.

I walk out of the pressbox and down to field level. The huge Jumbotron, a sign of a rapidly gentrifying neighborhood, is broadcasting an enormous CGI Bulldog mascot on the screen. Bully moves his eyes slowly over the field, and then back. He surveys a swath of casual football devastation: cups left in seats, trash, a field chewed to a disturbed green salad by LSU and Miss State's offenses trudging back and forth across it like grappling Greco-Roman wrestlers in the clinch. Mississippi State student volunteers walk up and down the aisles holding clear garbage bags, cleaning up the mess. Bully, glowering in godlike repose, waits on the scoreboard for something to happen. 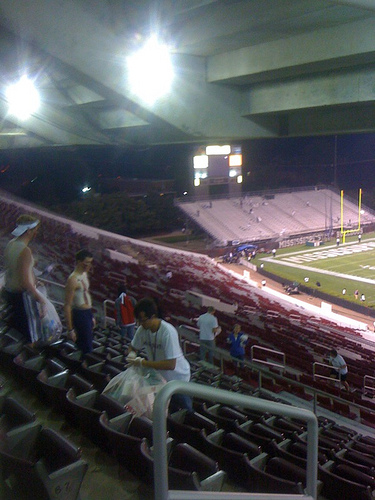