What do we know about the 2012 college football season? We know a few things you should and shouldn't expect to happen.

Share All sharing options for: 2012 College Football Do's And Don't's, The Premature Edition

Do: Covet others' experienced quarterbacks. As far as high-profile, battle-tested products go, only the Matt Barkley model at USC and Landry Jones at Oklahoma really stick out as the prototypical pocket passers with experience and a relatively clean recent injury profile. LSU will likely send out first-year starter Zach Mettenberger, Michigan will continue the bold and sometimes upsetting Denard Robinson experiment, Oregon and Wisconsin will go to the depth chart, and Ohio State will break in Braxton Miller as Urban Meyer's latest project after a disastrous year of Walrusball. (And that will take some time, as talented as Miller may be.)

In a global college football game tilting towards defense, those few teams with experienced signal-callers will survive the winter of our national points famine. (This may apply to the SEC, but we figure someone has to break the streak of SEC, and it may as well be someone like USC.)

Don't: Covet their running backs. The disappearance of the workhorse back continues, and its prospects for a resurgence get worse with the departure of Trent Richardson, LaMichael James, and Ronnie Hillman to the NFL. Only three-hundred-carries war horses like Montee Ball and Collin Klein remain in the contention for old-school one-back offense contention, and if you don't think Collin Klein is a running back then you a.) have never seen Kansas State play, and b.) have passed the I-am-not-Bill-Snyder test with flying colors.

Do: Expect further elaborate uniform variations from both Nike and Under Armour, and possibly gentler manipulations of the few brands Adidas has. It is cool that you hate them and have an opinion, but 18-year-olds love loud, tacky things in any form whether they fit your aesthetic guidelines or not. And let's all be willing to admit that the Oregon Rose Bowl helmets were fantastic, and should have been. They cost around $800 a piece, a number equivalent to the sum worth of Phil Knight's shaved arm hair sold at auction.

Don't: Waiting for Nike's Pro Wombat uniforms? Stop. Field testing was wildly unsuccessful, and that was before PETA heard anything about "marsupials holding molotov cocktails." 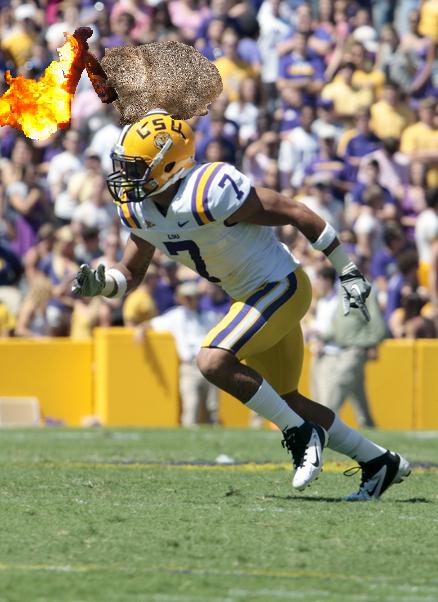 Do: Expect surprises in the realigned SEC schedule, especially in games with the new kids. It is the height of SEC hubris to expect that the two new members of the conference, Texas A&M and Mizzou, will lay down and taste the buzzsaw for every game on the schedule. Two bowl teams in the Big 12 with plenty of offensive talent will not simply disappear into a tiger pit with Ole Miss on September 1st and calmly wile away their doom. Someone is going down to College Station and getting blindsided in the Hate Barn, and someone is also going to get Winter's Bone'd in Columbia.

Don't: Expect either to compete for a conference division title. Especially Texas A&M, saddled as they are with the current lords of gravity in the SEC, the West. A&M is going to have a new quarterback, a new coaching staff, and will have none of the gifts of continuity or a returning starter at quarterback. (Mizzou, with QB phenom James Franklin, is in much better shape here.) The turbulence of playing a full SEC West schedule cannot help but be overstated here with the Finebaum Effect in play*,

*Finebaum Effect: every adjective employed in regard to the SEC is instantly exaggerated in degree to the Nth power.

Do: Run the rocket sweep as a complement to your existing run game. This would include the option and inside run variations you saw Baylor use in the Alamo Bowl. "Oh, that was against Washington's defense," you say. Granted, but Baylor ran some clever and effective variations of the sweep/option all year and ran them very well. Throw in Gus Malzahn's fondness for the buck sweep, and wing-T-style perimeter running attacks will continue to be a hot trend throughout 2012. John Robinson's student body right isn't dead, it's just evolved some new limbs and gills. And fangs, for some reason. (Don't ask, bro. Fangs are cool.)

Don't: Have your quarterback trot out and attempt to break down a defense with the speed option unless he's willing to get hit. A staple of the Urban Meyer variation of the spread option, the speed option is now a play some offenses feel like they can roll out whenever they want to "keep an offense option-safe." (LSU in the BCS title game.) This ignores the practice time and timing the option game requires (LSU in the BCS title game) and also assumes your QB is okay with taking some hits for the team. (LSU in the BCS title game.) If you're not committed to it as a base play, it's simple: do not run it. (Seriously, Jordan Jefferson ran that play like a drunk boatman put behind the wheel of an F1 car: badly, and with no understanding of when to turn the wheel.)

Do: Expect Florida State to improve from a cursed 2012. Every year someone's roster suffers an injury curse like something out of the Old Testament, and this year's smiting victim was the Florida State roster. The offensive line in particular suffered from injury, inexperience, and youth, and it showed as they sank to 77th in total offense. Don't ever watch their game against Florida. It is best forgotten, and buried so that sports archaeologists of the future can study it once the radiation and toxicity of the images themselves die down a little bit.

Don't: Put them in your top five just yet, unless you enjoy putting your hand in the same bear trap again, and again, and again, and then possibly again just for the hell of it. Jimbo Fisher has thus far followed the profile of a well-heeled but underachieving heir to the Bowden throne, losing three games in conference in each of his first two seasons. Florida State has to have one dominant turn through the conference before any national ambitions can come to fruition, and that is before you even look to their formidable out-of-conference games with West Virginia, USF, and traditional rival Florida. Their eventual landing spot in the polls is as much about schedule as it is anything else, and it starts with mastering the ACC before all else.

Do: Put coaching turnover in context. Twenty-six coaches were fired during the 2012 season, meaning a total of 21 percent of the workforce got the axe in a single year. This may seem like a lot, but based on other industries over an annual period the coaching profession is much like other major industries, and more stable than others. (Take the hospitality industry as a comparison, and the coaching business is practically sleepy in terms of job turnover.) It just looks worse because coaches are fired all at once over a designated hiring/firing period, and also because people tend to care a lot more about the fate of coaches than of the people who run your local manufacturing concern. This is not logical, but if you wanted logical you should move to wherever that exists*, logical person-type reader.

Don't: Attempt to find a pattern in the hiring this year. Coaching replacements came from every conceivable background, coaching tree, and category. Penn State and UCLA looked to the NFL (Bill O'Brien/Jim Mora,) Kansas went retread-NFL with Charlie Weis, Arizona State went bandito-college type with Todd Graham, and we're not even talking about the stranger ones like Mississippi's daring Sun Belt transaction to acquire Hugh Freeze.

If there is one salient trend, it is that veteran coordinators got serious opportunities to strike out on their own. Jim McElwain, Garrick McGee, Paul Chryst, Tim DeRuyter, Ellis Johnson, Carl Pelini, Norm Chow, and Gus Malzahn all got FBS jobs this year, and that is a sunny sign for those currently paying their dues. On the flip side, someone knocked the dust off Bob Davie and Terry Bowden, and we still have no idea what this means for you, New Mexico and Akron football, us, or the health of the universe in general.

Do: Watch The Big 12 This Year Whatever You Do. TCU wanted into a major conference, and then got into two, but private school kids do have all the luck in life like that. West Virginia, meanwhile, is running from some trouble back home east, and plans to just hide out in Great Plains and Texas for a while until this all dies down. If any mail marked "Subpoena" comes addressed to them, just throw it in the garbage, and whatever you do DON'T OPEN IT.

However different their backgrounds, WVU and TCU both up the interest quotient for the conference if only for the styles of play they bring. TCU remains one of the most balanced teams in college football even with Gary Patterson's defensive bent and talent-maximizing 4-2-5 scheme. WVU brings Dana Holgorsen's vertical variation of the Air Raid, which after some stutters and false starts this year roared to life in the Orange Bowl. Neither team is boring in the least, and their entry into the Big 12 means the days of the open football range live on in the conference.

Don't: Sleep on the ranchers of the league. And by that I mean Texas, whose defense under Manny Diaz is the antidote to the freewheeling spread attacks that dominate the league. If Longhorns' offensive coordinator Bryan Harsin's offense leans on the run--and with David Ash still getting his legs at quarterback, he will have little choice besides that--then Texas could be the happy contrarians of the league, pounding away with the ball and relying on their malicious defense to carry the day. (Bill Snyder sighs, and gets no credit for doing this for years, but old men are used to seeing their style jacked and presented as "new.")