The Rose Bowl Stadium was built during college football's great stadium boom of the 1920s, and the story of the historic venue's construction is a tale of the sport's first big-time era.

As much as Pasadena's famed Rose Bowl Stadium represents a connection with college football's long and illustrious past, it's also a snapshot of a sport in its golden era. The stature of the game today is evidenced by television contracts in the billions of dollars, and massive big-ticket stadiums were the manifestation of a similar boom era in the 1920s.

The Rose Bowl was able to assume the mantle of the most high-profile contest in the young sport due to a fortunate intersection of the exploding popularity of college football and California's economic upswing at the turn of the century. The resulting interest in the New Year's Day game placed the Tournament of Roses in an ideal position to take advantage of the big stadium construction boom that swept the country soon after.

The story began in the 1870s, as well-to-do Easterners settled in the community that became Pasadena to enjoy the location's climate and secluded luxury. With the establishment of a railway stop soon after, the area became a winter resort, and many of the winter visitors relocated permanently. The result was a regional real estate boom.

Pasadena was incorporated in 1886, and two years afterward saw the establishment of the Valley Hunt Club - a social organization for the elite members of the blossoming community. At an early club meeting Prof. Charles F. Holder proposed holding a winter festival to show off the benefits of the area's temperate climate for visitors from the mid-west and .

New Year's Day 1890 saw 4,882 on hand for the club's inaugural festivities, which culminated in the first Rose Parade. The event proved so popular that within five years it had gotten too large for the organizers to manage and the Tournament of Roses Association was founded to undertake those duties exclusively. 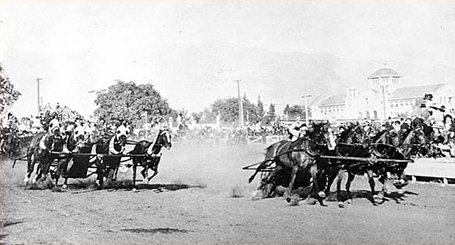 In the early years, the festival featured a number of different athletic events including bicycle races and polo matches.

The first football game occurred in 1902 when Michigan obliterated Stanford, 49-0. The one-sided game prompted tournament organizers to forgo the gridiron contest for 14 years. Chariot races became the event's centerpiece in the meantime.

In a series of meetings in New York City that January, the group succeeded in reforming a game of violent mass-momentum plays. The reform was prompted by public outcry at the severe injuries players suffered up to that time. The rules committee also legalized the forward pass, which had been an intensely controversial aspect of the game by the sport's senior adherents.

Over the next half decade, schools began experimenting with the pass and the rules committee continued to ease the restrictions on its use. Finally, in 1912, passes of any distance were permitted and an end zone created, allowing the play to be used to score. The offensive onslaught was on. Teams across the country took to the strategy with gusto and found they could use it to succeed wildly.

One ancillary result was that the already-popular game saw a massive increase in interest. Offense-friendly games proved a hit with spectators who could enjoy the game without, necessarily, being a fan of the teams playing.

This increased interest in the sport was seized upon by the Tournament of Roses, which restored its gridiron contest to the annual festival. On Jan. 1, 1916, Brown traveled to Pasadena's Tournament Park to take on Washington State in the revived inter-sectional gridiron contest.

A rainy day tempered the turnout as a relatively meager crowd of 7,000 were on hand to watch as the western team walloped their eastern counterpart, 14-0. The next year was a better barometer of the interest in the unique matchup as approximately 26,000 showed up on a much more pleasant day to see Oregon defeat Pennsylvania 14-0.

Following World War I, college football's popularity grew exponentially, and the Tournament of Roses game grew along with it. Higher education across the United States enjoyed a dramatic increase in enrollment following World War I. The number of students attending the nation's colleges more than doubled during the 1920s, creating a captive audience for the increasingly popular game.

Yet the appeal of football extended beyond the campus, and with radio in its infancy and television decades away, the profitability of the gridiron contests was the take at the gate. And the more seats in the stadium, the bigger the take for the organizers.

In 1920 a highly anticipated matchup between Oregon and Harvard had event organizers scrambling to prepare additional seating to handle the demand. In the week before the game, the capacity of the Tournament Park venue was increased 20 percent to more than 30,000. (Harvard beat Oregon, 7-6)

The demand prompted the Tournament of Roses to propose building a permanent structure for the games, with a planned capacity of 60,000. Funding was proposed through a system of memberships, which, once purchased for $100, would provide exclusive seat privileges.

Interest was lacking until the announcement of the 1921 Cal vs. Ohio State game, when organizers were deluged with subscriptions. When more than 100,000 people signed up there was no way to place them all in the existing venue even after expanding it to 31,500 seats. Eventually more than 42,000 were on hand to witness the Golden Bears' 28-0 trouncing of the Buckeyes.

The success of the fund drive launched the stadium construction effort. Former Tournament of Roses chairman W. L. Leishman spearheaded the project and enjoined famed architect Myron Hunt to design it. The original plan called for a horseshoe shaped structure modeled on the Yale Bowl built in 1914. 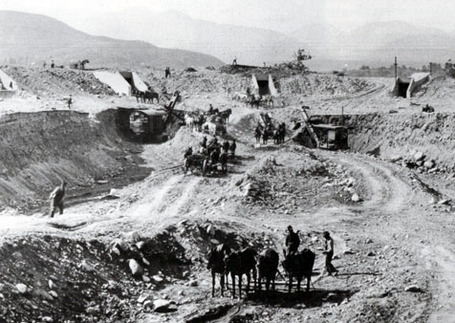 Construction of the Rose Bowl Stadium in June 1922.
Photo: Pasadena Museum of History

The location for the structure would be in the Arroyo Seco on land owned by the city of Pasadena. The contours of the seasonal watershed provided an ideal geographical setting for planned stadium. Concrete tunnels were built on the prepared surface, and then earth was filled in over them to create the base of the structure.

The construction was completed by October 28, 1922 in time for the stadium to host its first football game, a tilt between California and Southern California (the Golden Bears would win the contest 12-0 and go on to claim the national championship). The total cost of the project was $272,198.20.

Newspapers referred to new stadium was as the "Tournament of Roses Stadium" or the "Tournament of Roses Bowl" for several months preceding the structure's opening. Harlan "Dusty" Hall, a veteran newspaper reporter who had been hired by the organizing committee to handle public relations, dubbed it "The Rose Bowl," and the moniker stuck, notwithstanding the stadium's horseshoe shape.

The first New Year's Day game was a matchup between Southern California and Penn State. Only 43,000 fans showed up at the 57,000-capacity venue for the contest, which started an hour late when the Penn State squad got stuck in traffic on the way to the game. The Trojans would go on to down the Nittany Lions, 14-3.

The Tournament of Roses' timing was impeccable. The Rose Bowl's cachet as the premiere inter-sectional contest and state-of-the-art facilities put the game at the forefront of a growing interest in the sport.

In 1927 alone more than 30 million spectators turned out for college football games, paying more than $50 million for the privilege. The largesse prompted a building boom both fueled by the blossoming receipts and targeted at maximizing the take at the gate. Many of these gigantic structures were, like the Rose Bowl, modeled after Yale's pioneering football venue.

The year after the Rose Bowl Stadium hosted its first game, the 75,144-seat Los Angeles Memorial Coliseum had been built at a cost of $954,873. Other large-scale stadiums built around the time were the 81,000 capacity Tulane Stadium in New Orleans, the University of Pittsburgh's 69,400-seat Pitt Stadium and Michigan Stadium, which would hold 72,000 upon opening.

The stadium retained its distinctive horseshoe look for another five years until the rapidly growing popularity of the game compelled the Tournament of Roses to undertake a $115,000 expansion. The upgrade involved enclosing in the southern end of the structure making it a true bowl. When completed in 1928 the bowl boasted a seating capacity of 76,000.

From there, it was onward and upward. The game remains the biggest non-title contest of the college football season, this year once again pitting a pair of major conference champions and national brand names. 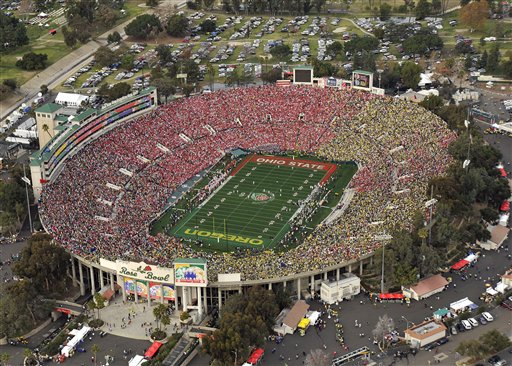