Reviewing the college football bowl games from over the holiday break as if they were feature films.

Little Caesar's Pizza Bowl. Purdue 37, Western Michigan 32: The comedy of errors hasn't waned in popularity, but its quality really has taken a dive in the 21st century. The most popular of these in recent years? The Meet The Parents series, a long series of horrendous situations of people behaving stupidly and badly to each other in general and to Ben Stiller specifically. (Not that Ben Stiller doesn't deserve to be treated badly, but that's not the point.)

There were 10 turnovers total in the Little Caesar's Bowl, each one as inane, obvious, and cruel as the gags in Meet The Parents. The point of this review? That people who enjoy these movies are closet sadists, the kind of people who use humor and casual games of volleyball as diverts for their unreleased desire to harm and see others harmed. Did you enjoy the Little Caesar's Bowl, too? Then we're never letting you make the choices on movie night OR standing between you and the tracks of a fully operational subway line, either.

(Purdue won, but in parades of malicious errors like this game, victory is pointless.)

Belk Bowl. N.C. State 31, Louisville 24: Really just a remake of A History of Violence. Oh, he may look serene and domesticated, but Tom O'Brien has a past, one that allows this mild-mannered 7-5 coach to unleash hell on his opponents when they least expect it. Was there a love scene on the stairs? Yes, and the pants briefly worn in the scene came from Belk department stores because everything's for sale these days, even the quiet savage himself, the Notorious T.O.B. (You're not going to eat for three days visualizing this, but the post-holiday fast starts now whether you like it or not.)

Grade: Three Stars. Remember when Louisville went for a fake punt and two onsides? No? FINE. Neither do we, and let's never talk about it again.

Military Bowl. Toledo 42, Air Force 41. The Right Stuff. Air Force did the mansome thing by going for two late. The call was good, the execution terrible, but say this: like Chuck Yeager crashing his test plane and walking away unscathed, sometimes the high-quality glory is found in the biggest fireballs. The Rockets continued the space theme by nearly blowing up on the launchpad, suffering some serious travails during the course of the mission, and then narrowly survived a scary re-entry before splashdown.

Grade: Three and a half stars. Like The Right Stuff it was a bit too long, but the quality more than made up for the poor editing.

Bridgepoint Education Holiday Bowl. Texas 21, Cal 10: Coffee and Cigarettes. Nothing much happened. Nothing much continued to happen. Other things borrowed from other movies--Bryan Harsin of Boise State, Manny DIaz of Mississippi State, the JUCO Transfer Zach Maynard--appeared and were forgotten as nothing much continued to happen. Something sort of memorable happened when David Ash played something like a quarterback, and then the movie ended. The scenery was nice. The actors stared and did not do much.

Champs Sports Bowl. Florida State 18, Notre Dame 14: Grumpy Old Men. Like most fights between old men, it was funny, and then sad, and then funny again. Then one got the better of the other, and then it got ugly, and in the end both Notre Dame and Florida State sort of seemed sheepish about their performance. 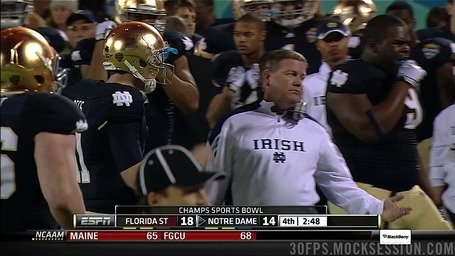 Valero Alamo Bowl. Baylor 67, Washington 56: The Speed Racer movie. There weren't really characters, and you can't call that a movie, but it was...something? With the lights? And the touchdowns? And the 1,300-plus yards of offense, and the spectacular special effects and the cars and the VRROOOOOM? If watch enough of it at once, you do just surrender logic completely, and watch the flashing lights dazzle the eyes. Afterward you will remember that there was a character named "Robert Griffin the 3rd," and that he was pretty good, and that none of this made any sense whatsoever and was very, very entertaining. (It also got the writers totally fired.)

Grade: Three and a half stars. You won't watch it again, but you certainly don't regret seeing it once.

OH NO SHE DIDN'T.

New Era Pinstripe Bowl. Rutgers 27, Iowa State 13: Staying Alive. The sequel to Saturday Night Fever, and a movie that has nothing to with the Pinstripe Bowl, a game that was sluggish, uneventful, and is most memorable for the ghastly injury of the player who tried his damnedest to make this game interesting. I really only bring up Staying Alive because it's semi-regional, and thus allows me to bring up the most 1980s song ever.

NICE SHIRT, BRO. It should be pointed out that like Staying Alive, you probably didn't make it to the end of this film, either, and turned the channel once the novelty wore off.

Franklin American Mortgage Music City Bowl. Miss State 23, Wake Forest 17: Open Range. It took a while, but when the final showdown happened in the fourth quarter Vick Ballard asked who the bad guy was, walked right up to them, and delivered the killshot before anyone could raise a hand to object. Still, it took long enough to get to the shooting, man.

Grade: two and a half stars.

Insight Bowl. Oklahoma 31, Iowa 14: The rarest of creatures, the Insight Bowl combined an awkward Odd Couple setup with a sudden Terminator subplot out of nowhere in the middle of the movie.

The old saying "when you have two movies in one movie, you don't have one movie?" True enough for the Insight Bowl, a disjointed, sluggish affair with no plot and one overpaid player in Kirk Ferentz who drags the entire production down with a lifeless performance. That said: the surprise robot attack scene was almost worth the price of admission. (Almost.)

Meineke Car Care Bowl Of Texas. Texas A&M 33, Northwestern 22: Dodgeball. If you can dodge a wrench, you can narrowly avoid collapsing at the last second to a toothless but determined Northwestern team, Texas A&M. The perpetual loser does triumph in the end in this film, but the well-wrought plot did make it seem for an instant that this film might not follow the conventions of its genre. For that much and for Pat Fitzgerald's turn as the overly emotive White Goodman of Big Ten football, we applaud the Car Care Bowl for being a well-wrought cliche.

Hyundai Sun Bowl. Utah 30, Georgia Tech 27: No Country For Old Men. Paul Johnson could have let the money go and been saved, but in high-stakes moral poker in the wastes of West Texas no one likes to flinch--especially the stone-faced killer Kyle Whittingham. Giving up a 28 yard TD pass on 4th and 14 is the cattle gun to the forehead of college football, but then again, Al Groh has always been the unsuspecting motorist in the wrong place at the wrong time.

Grade: Three stars. Like its cinematic counterpart, a bit too long.

Autozone Liberty Bowl. Cincy 31, Vandy 24: Into The Wild. Private school kid gets lost in the woods on purpose, dies.

Grade: Three and a half stars. The bearcat was a surprisingly compelling actor despite being, you know, a bearcat.

Kraft Fight Hunger Bowl. Illinois 20, UCLA 14: Battlefield Earth. Like the film, everyone heard how awful the Fight Hunger Bowl was, but had the sense not to subject themselves to an actual viewing. Eight people actually watched this game. They are all dead, and you made the right call, Person Who Watched Something Else.

Chick-Fil-A Bowl. Auburn 43, Virginia 24: The Usual Suspects. Mike London as the cop, and Gus Malzahn as the mad genius who escapes for a new caper in the end--but only after a two-hour reign of terror leaving everyone who watched it horrified and amazed. (Gene Chizik was just a patsy all along, guys.)

Grade: Three and a half stars.