The stats that mattered in Oklahoma State's 41-38 win over Stanford in the Tostitos Fiesta Bowl, from Justin Blackmon's finest three quarters, to Andrew Luck's completion percentage, to five missing points.

87.1: Andrew Luck's completion percentage in the Tostitos Fiesta Bowl. As with Oregon-Wisconsin, both offenses had to work for their success in this game. Stanford took away Oklahoma State's ridiculously efficient run game (Joseph Randle and Jeremy Smith combined to gain just 24 yards on 11 carries), and Oklahoma State both made quite a few tackles for loss (forcing Stanford to convert on passing downs, which they didn't do at an amazing rate in 2011) and took the big men mostly out of the Stanford gameplan.

Tight ends Coby Fleener, Zach Ertz and Levine Toilolo and fullback Ryan Hewitt combined for 46 percent of Stanford's targets in 2011 (not including targets aimed at the injured Chris Owusu), but they only accounted for eight of 27 completions yesterday. No worries. Luck instead found Ty Montgomery, his No. 6 target for the season, seven times for 120 yards and a touchdown. He found receiver Griff Whalen seven of eight times for 85 yards, and he completed 27 of 31 passes overall for 347 yards, two touchdowns and a pick. It probably goes without saying, but you are usually going to win with that type of performance.

19.8: Average gain on the 12 plays intended for Justin Blackmon. Was he hurt? Was he not? And what exactly is an inner thigh infection? Blackmon was evidently limited in warmups and completely non-existent in a listless first quarter. Stanford went up 14-0, and it appeared the 'Pokes would be attempting to come back without anything from their greatest ever receiver. And then he played perhaps the best three quarters of his career. It was odd, confusing, and wonderfully exhilarating. He caught eight of 11 passes for 186 yards and threw in one carry for 52 yards. He was bigger, stronger, faster, and more agile than any defender Stanford could throw at him, and his first two touches tied the game. Then, with the game on the line and three minutes remaining, he caught a slant and took it 21 yards on fourth-and-3. Randle scored three plays later to tie the game.

11.7: Average gain on Brandon Weeden's final 32 passes. Some combination of nerves, good defense and uncertainty regarding Blackmon led Weeden to play some of the worst football of his career in the first quarter. After ten passes, he was 5-for-10 for 26 yards and an interception (on his very first pass, no less). He was double-clutching the ball, he was inaccurate, and he was freezing up. Or, to be a bit more apt:

Once Blackmon showed up, however, Weeden calmed down. (Funny how that works.) He completed 24 of his final 32 passes for 373 yards and three touchdowns, all to Blackmon.

8.2: Expected points from field goals of 30, 35, 41 and 43 yards. On such kicks, Stanford scored three points. They lost out on 5.2 points in a game they lost by three. For all of Blackmon's heroics, it would not have been enough had Stanford kicker Jordan Williamson not had the worst game of his life. He missed a 41-yarder on Stanford's second possession (one that followed a Weeden pick), he missed a 35-yarder at the end of regulation, and he missed a 43-yarder in overtime. As with games like the 2000 Orange Bowl, you hate for a fantastic game to end with a kicker making this face... 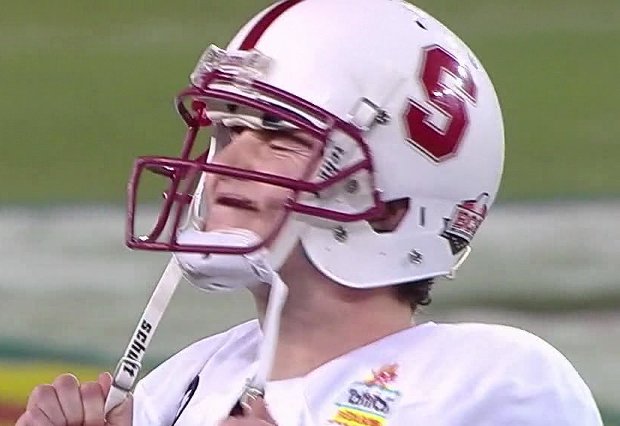 ...but it's going to happen sometimes.