What if Tim Tebow had signed with Alabama? An alternate recruiting history

Tim Tebow's recruitment was recent college football history's Butterfly Effect. While most players don't lend themselves to such a what-if effect, this one does. This was originally published in 2012.

Share All sharing options for: What if Tim Tebow had signed with Alabama? An alternate recruiting history

Recruiting has an odd relationship with college football fans. It means everything, and it means very little. Some of the most fascinating battles took place over players who didn't live up to the hype. In fact, of the 10 players in Rivals.com's "Best recruiting wars" from 2011, only two became true stars. You never know which battles truly matter, but hype meets production just enough to continue caring.

While Ryan Perrilloux's eventual commitment to LSU crushed Texas fans, Perrilloux failed to make much of an actual impact before getting kicked out of school. But a year later, when Tim Tebow chose Florida over Alabama, it defined each program's future.

We don't know which upcoming recruit will have a program-changing effect, but it might be instructive to look back at the impact a single player can have.

Tebow has been inescapable. He won two national titles (first, as a de facto short-yardage running back in 2006, then, as a quarterback and the face of college football in 2008) and a Heisman Trophy at Florida, then became one of the most strangely polarizing figures in recent memory.

But before he was a household name, he was a five-star high school prospect trying to choose between two programs in serious transition.

In December 2005, Urban Meyer was wrapping up his first season in Gainesville.

He took over a Florida program that had faded under Ron Zook, but in his first season, the Gators improved to 8-3. They were preparing for a January 2 meeting with Iowa in the Outback Bowl (a game they would win, 31-24), and Meyer was putting the finishing touches on what would become an incredible recruiting class. He had scored 16 commitments, including a five-star offensive lineman (Carl Johnson) and a boatload of four-star prospects like athlete Jarred Fayson and defensive tackle Brandon Antwine.

But he was still in need of a quarterback. Chris Leak would be a senior, and the backups were questionable. True freshman Josh Portis had struggled with ball security, saw his playing time drying up, and transferred. Former blue-chip quarterback Cornelius Ingram was moved to tight end. Fayson was a high school quarterback, but things had been thrown into the air after blue-chipper Jevan Snead decommitted from Florida in favor of his homestate Longhorns. (Supposedly Snead grew wary of the Gators when they continued to recruit other quarterbacks like blue-chip junior college quarterback Brent Schaeffer and a kid from Ponte Vedra Beach named Tebow.)

A different story was playing out 450 miles northwest.

Still feeling the effects of probation and scholarship limitations, Mike Shula was slow to get rolling at Alabama.

He inherited a 10-3 team, but after some odd drama -- the Tide had hired Mike Price to succeed Dennis Franchione, then fired him in May 2003 because of what we will call some extracurricular activity -- had gone just 4-9 in 2003 and 6-5 in 2004. Facing pressure, he fielded an excellent, experienced team in 2005. Behind quarterback Brodie Croyle and a stifling defense led by linebackers DeMeco Ryans and Freddie Roach and veteran safeties Roman Harper and Charlie Peprah, the Tide started 9-0 and found themselves ranked fourth in the country when No. 5 LSU came to town. However, they frittered away a 10-0 halftime lead and lost in overtime, then lost by 10 points at No. 11 Auburn.

The Tide exceeded expectations but finished poorly, and heading into 2006, they had no experience at quarterback (sophomore John Parker Wilson was getting ready to take over), and they had to replace six of their top seven tacklers. A step backward was likely, and Shula was not on solid enough footing to endure another rebuilding year.

In other words, Shula needed Tebow. Fifteen players had committed, including a five-star back (Mike Ford, who would never make it to campus) and seven four-star prospects. He was still in on players like Andre Smith (a five-star lineman from Birmingham who would thrive), five-star running back C.J. Spiller, five-star linebacker Brandon Spikes, Javier Arenas (a less-heralded athlete from Tampa) and four-star Mississippi back Terry Grant.

Wilson had played a bit as a true freshman, senior Marc Guillon was experienced, and redshirt freshman Jimmy Barnes had been highly-touted. But the QB position was in flux.

On the morning of Tuesday, December 13, 2005, Tebow, a likely early-enrollee (if he should decide to give up on baseball), was ready to announce.

Coaches from Florida and LSU had come to visit on Sunday, and Shula came for a lengthy visit on Monday. His top five also included Michigan and USC. ESPNnews was on hand as he chose the orange and blue.

He claimed to have been a lifelong fan of the Gators, and he was drawn to the offense Meyer and coordinator Dan Mullen were putting together. It was, as we would find out, perfectly suited for his fullback-who-can-pass skill set. Alabama offensive coordinator Dave Rader had learned to adapt, thanks mostly to a wealth of injuries (moment of silence, please, for Tyrone Prothro's career), but looking back, it is easy to understand what Tebow may have seen in Florida.

But he still could have ended up at Alabama.

Such small things end up tipping a player's recruitment. Perhaps Snead holds steady with the Gators instead of flipping to Texas. Perhaps any number of other factors sway Tebow toward Tuscaloosa. Whatever the case, this is the perfect example of one player's decision impacting the landscape as a whole.

So what else might have happened if Tebow had chosen Bama? 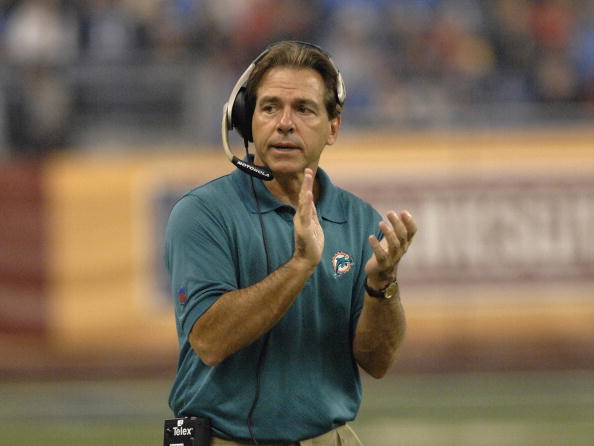 If you're going to have a poor season in Tuscaloosa, it better be your first. Otherwise, it will likely be your last.

Shula needed a strong 2006. Wilson ended up faring well at quarterback (2,707 yards, 57-percent completion rate, 17 touchdowns, 10 interceptions), but he was inconsistent, and the Tide were particularly frustrating in the red zone. The defense regressed, as expected. Alabama went 2-4 in one-possession games and finished the regular season 6-5. Shula was fired the week after their 22-15 home loss to Auburn.

While it is difficult to project what Tebow might have done at Alabama in 2006, and while that would be unfair to the perfectly decent Wilson, it isn't hard to see Tebow playing a role similar to what he filled at Florida that first year. Leak took most of the snaps for the Gators, but Tebow was used in short-yardage packages. He completed 22 of 33 passes for 358 yards, five touchdowns, and an interception, but more importantly, he rushed 89 times for 469 yards and eight touchdowns. Florida ranked third in the nation in Red Zone S&P+ in 2006, while Alabama ranked 89th.

How might improved red zone performance have impacted Alabama?

In all six regular season losses, red zone iffiness played a key role. The Tide probably do not win all six games with Tebow, but it isn't unreasonable to think they would win at least three. Shula probably does not get fired for going 9-3 with a stud freshman quarterback. So Shula is not fired and replaced by Saban.

Perhaps things fall apart eventually, but it is far from a slam dunk to assume that Saban -- under whom Alabama would win four national titles in seven years -- is available whenever that happens.

Last week when Tim Tebow announced he was going to Florida, it was icing on the cake. It's certainly important when you know you have a quarterback of that quality already committed to the school you're looking at.

Harvin had narrowed his options to Florida and USC, and he may have chosen the Gators even if Tebow had shouted "ROLL TIDE" on December 13. It was much closer to his family; in the same article, he talked about not wanting his mother to have to travel across the country to see him play.

Still, Tebow's commitment may have cast a sliver of doubt in Harvin's head.

(This sets off its own chain of what-ifs. USC lost two games in 2006 -- 33-31 to Oregon State and 13-9 to UCLA -- is Harvin worth six points, especially for a team that returned neither kicks nor punts well?) 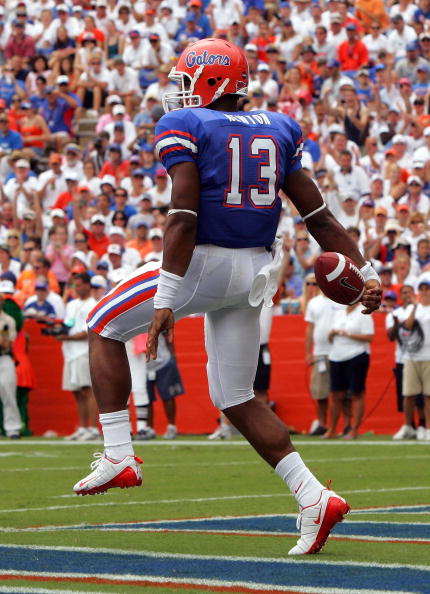 We know Newton's saga as well as Tebow's. A year after landing Tebow, Meyer reeled in high-four-star quarterback John Brantley and Newton, a five-star signee from Atlanta's Westlake High School.

Newton was the No. 28 prospect in the 2007 class, one of four five-star athletes Meyer landed that year. Florida's haul was monstrous: Newton, Brantley, Carlos Dunlap, Joe Haden, Aaron Hernandez, Major Wright, Chris Rainey, Ahmad Black, the Pouncey brothers, et cetera. This class played a role in Florida going 25-2 in 2008-09, but Newton made but a small contribution.

From the start, it was clear Newton was a special talent. Newton served as backup his freshman season, completing five of 10 passes and rushing 16 times for 103 yards. He began 2008 in the same role but was slowed by an ankle injury. He took a medical redshirt, but his career took a left turn when he was arrested for laptop theft. He did not get kicked out, but ended up transferring in January 2009, after Tebow announced he was returning for his senior season.

With Tebow in Tuscaloosa, Newton remains a Gator. He and Brantley fight it out for the starting job in 2007, and that is probably a battle Newton wins. We don't know if Florida still wins the title without Tebow in 2006 (he did make a difference in a couple of tight games), but we do know that they were going to be in good shape. Perhaps the Gators don't win in 2006, but perhaps they win in 2009 or 2010 instead.

When Tebow committed to Florida, Shula and Alabama doubled down on their pursuit of a Texas Tech commit from Southlake Carroll (TX) High School. McElroy had committed to Mike Leach in mid-September, but he visited Tuscaloosa in early-January and made the switch soon after. If Tebow comes to Bama, McElroy doesn't; instead, he becomes Graham Harrell's successor in Lubbock.

Tebow's ESPNnews cameo in December 2005, was the Butterfly Effect of championships. It made a direct impact on the 2006, 2008, 2009 and 2010 BCS championships, and it indirectly ended up costing a coach (Shula) his job and redirecting the path of another (Saban).

We have no idea which player in this class, if any, will have a similar impact. But we will continue to care far too deeply about every prospect, just in case he's that one.