Notes From New Orleans: LSU-Alabama, And Calm Before The Storm

LSU and Alabama play for the National Championship on Monday night in New Orleans. But first there's been the prelude: An NFL playoff game, pep rallies, and a 24-hour party that goes for 72 hours. Here are some notes and images from the scene.

Share All sharing options for: Notes From New Orleans: LSU-Alabama, And Calm Before The Storm

New Orleans is the only place in the world where one second you walk past a soundstage blasting the same Ying Yang Twins song over and over again, the next you walk past a six-person marching band performing on a street corner, and then, on the way into a football stadium, you pass a man screaming a passage from the the Book of Solomon into a megaphone.

That was my experience, walking the six or seven blocks to the Superdome. Hundreds of thousands of visitors have probably had their own "Wait, seriously?" moment elsewhere in New Orleans this weekend, and we all came here for a football game. But Bama-LSU isn't until Monday night. That scene was Saturday night, on my way to the Saints playoff game with the Lions.

(Important Note: When your undercard is an NFL playoff game, you know you're in the midst of a pretty fantastic sports weekend. Really. Even the New York Times is impressed.)

Anyway, it's been an amazing 48 hours. So just for fun, here are some sights and sounds from the weirdest city in the world on one of the craziest sports weekends I've ever been a part of. We'll get to Bama-LSU, but first, some quick notes from the Saints game.

NOSEBLEEDS. Don't knock 'em till you tried 'em. With football, at least. I got Saints tickets at the last minute, and it turns out they were in the second-to-last row of the Superdome. And this was AWESOME. Over the past few years I've become one of those people who prefers watching football on TV as opposed to paying hundreds of dollars to squint at the field and wish the jumbotron would show more replays. Having said that, nosebleed seats have two things going for them that you can't get anywhere else. First, you spend three hours with the loudest, craziest (read: drunkest) fans in the stadium, so if you like coming to games for the atmosphere, this is probably the purest version you'll find anywhere.

Second, and more importantly, it's actually a pretty great view. There's been a whole lot written about the NFL's refusal to release the "All-22 angle" that shows every player on the field, but in the nosebleeds, that's pretty much the best part. You feel like a coach breaking down film. And even if that reminds you how unqualified you are to be a coach, it's still fun to sit there and try and keep track of everything as plays develop.

BREESUS CHRIST. Speaking of the All-22 angle, one thing that just about anybody could see from the nosebleeds was Drew Brees. Or specifically, how completely incredible he is. He'd throw into windows of the field before they were even open or before his receiver had even thought to turn his head, he'd throw 20-yard outs off his back foot to the opposite side of the field, and every time, on almost every throw, it was a dead-on. Saturday was a good reminder that we're watching one of the most incredible quarterbacks in history, and we should all enjoy this ride in New Orleans as long as it lasts.

MEGATRON. Calvin Johnson is incredible, and you know this because everybody always reminds you. But we couldn't talk about the Saints game with getting all redundant about incredible he is, so there. It's in writing. He spent the entire night double covered and still caught two touchdowns and another bomb that brought Detroit to the two. Freak. Of. Nature. 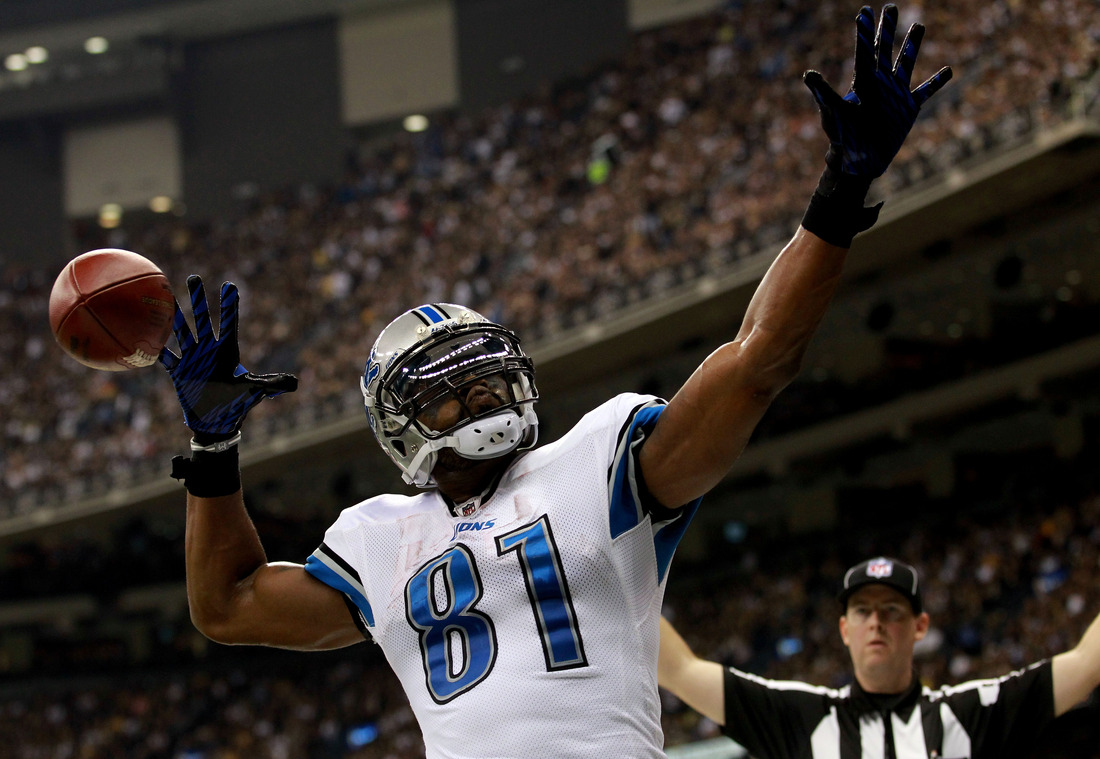 SPECIAL SHOUTOUT TO THIS GUY. Putting chili in a bag of Doritos is either the greatest move of all time, or the grimiest. Maybe both. If this was a Lions fan I would've been convinced it's @DadBoner. Such a bold move. Really takes Doreets to the next level, you guys. 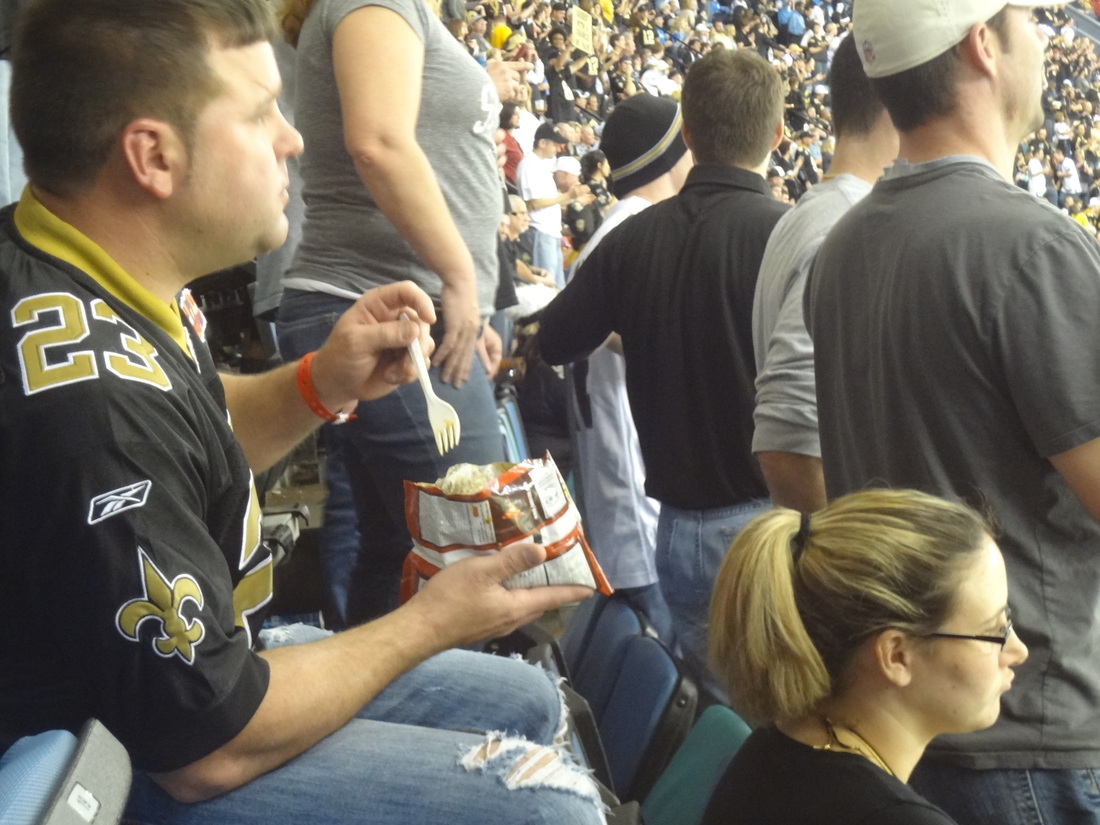 Really, nosebleeds are the greatest.

AFTER EVERY SAINTS TOUCHDOWN they play this Ying Yang Twins song and the video board reads "SAINTS FANS GET CRUNK". Because New Orleans is the best, that's why. And Saints fans, for all their absurdity, have gotta be the least obnoxious bunch of insane fans on earth. Maybe it's because the team was awful for so long, but I've never been to an NFL game where fans were so out of their mind, yet so much fun at the same time. At an Eagles game, for instance, the fans are clearly out of their mind, but that just makes you feel unsafe. At a Redskins game, it makes you feel depressed. Steelers? Homicidal, probably. But at a Saints game it really feels like you're part of a party, a feeling that you'd normally only see in college football. It's fantastic. Speaking of which, let's move on to the main event.

BAMA-LSU UPSTAGES EVERYTHING. Even at the Saints game--a playoff game--everyone was talking about Monday Night's National Championship. The LSU band performed pregame and everyone was chanting "L-S-U". On the way out, as Saints fans chanted "WHO DAT", someone yelled "ROLL TIDE" and the "WHO DAT" chant suddenly turned into an "L-S-U" chant.

Walking around New Orleans this weekend, you're shocked by two things. First, every sidewalk in the city is crowded with foot traffic at all hours of the day. It's like China down here. But in the best of ways, because everyone's in a good mood, and starting about noon, just about everyone's walking around with a drink in hand.

Second, 90 percent of the people you see are wearing either Alabama or LSU colors at all times. You have to think that all these people came to New Orleans with only crimson or gold clothes packed for the entire trip. And this is how a hundred thousand middle-aged southern families imitate the bloods and crips for a long weekend. 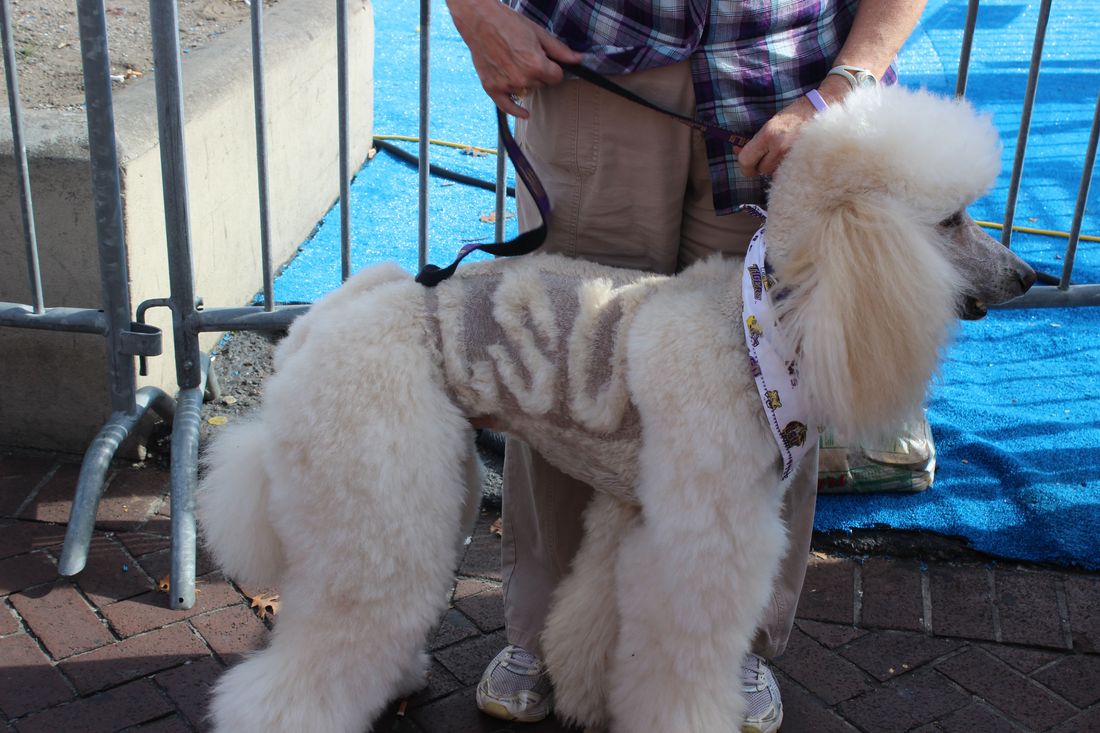 A STRANGELY CIVIL WAR. One thing that makes no sense: LSU fans and Bama fans don't seem to hate each other all that much. In the 48 hours I've been here, there's been the stray shouting match and I'm sure there've been plenty of fights on Bourbon Street, but for the most

part both fanbases have a strange level of respect for one another. Growing up more of a college hoops fan, this baffles me.

Maybe LSU and 'Bama aren't technically hateful rivals, but at the same time, why aren't they hateful rivals? They are the two best programs in the best conference in college football, they compete directly with each other for national titles every year, they compete for the same recruits every offseason... Alabama stole LSU's coach, for God's sake. And even putting the current season aside, if someone asked you to talk about the most dominant programs in college football, your first two examples would be LSU and Alabama.

Familiarity is supposed to breed contempt, but for some reason these fans don't hate really hate each other. They hate each other's teams, and coaches, but not each other--not the way Louisville fans hate Kentucky fans, or Michigan fans hate Ohio State fans. And maybe it's only a matter of time. For now, though, the back-and-forth between "Roll Tide" and "Go Tigers" on Bourbon Street is more festive than competitive. It's cool to watch, but totally bizarre. Like watching Nike play nice with Reebok.

THE BEST DECISION. I'm in New Orleans with family this weekend. My family is full of LSU fans, so this meant we had to head over to Jackson Square to check out the LSU pep rally. Only instead of the actual rally, we decided to sneak into a private party we noticed on an adjacent rooftop. Next thing you know, we were getting a private concert from the LSU band and the Golden Girls. 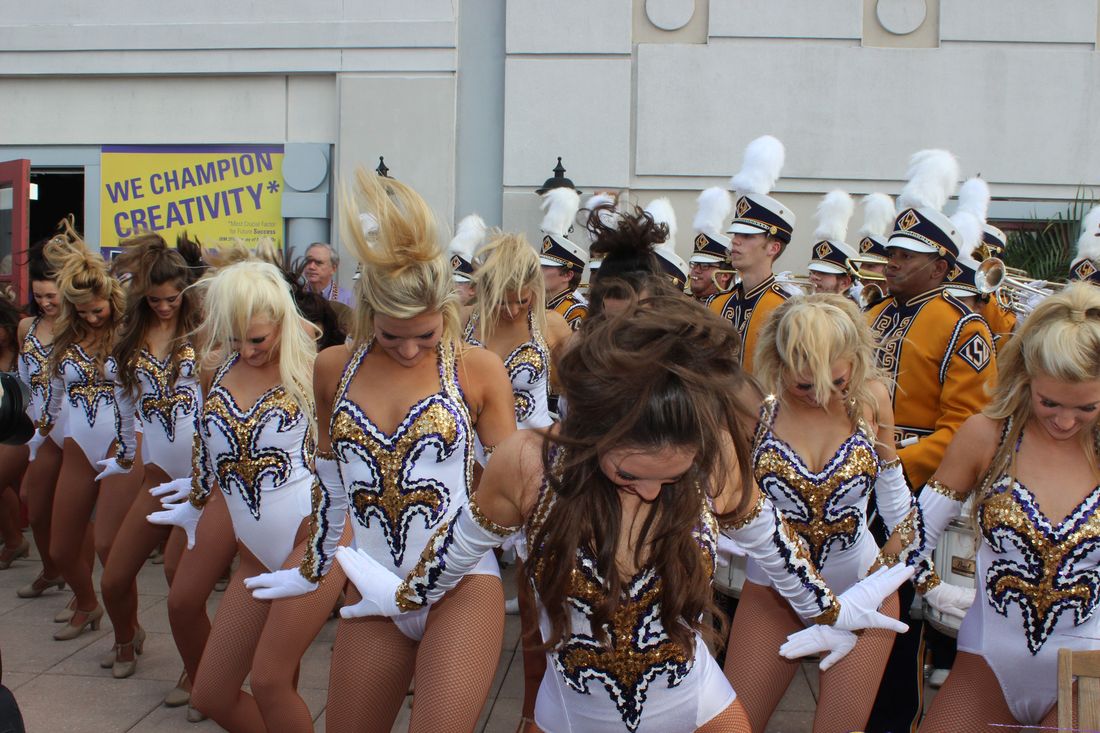 [/tries not to stare]

BOURBON STREET. Is every bit as insane as you'd expect this weekend. If a gigantic, muddy tailgate and the Las Vegas strip decided to have a baby, Bourbon Street this weekend would be the offspring. 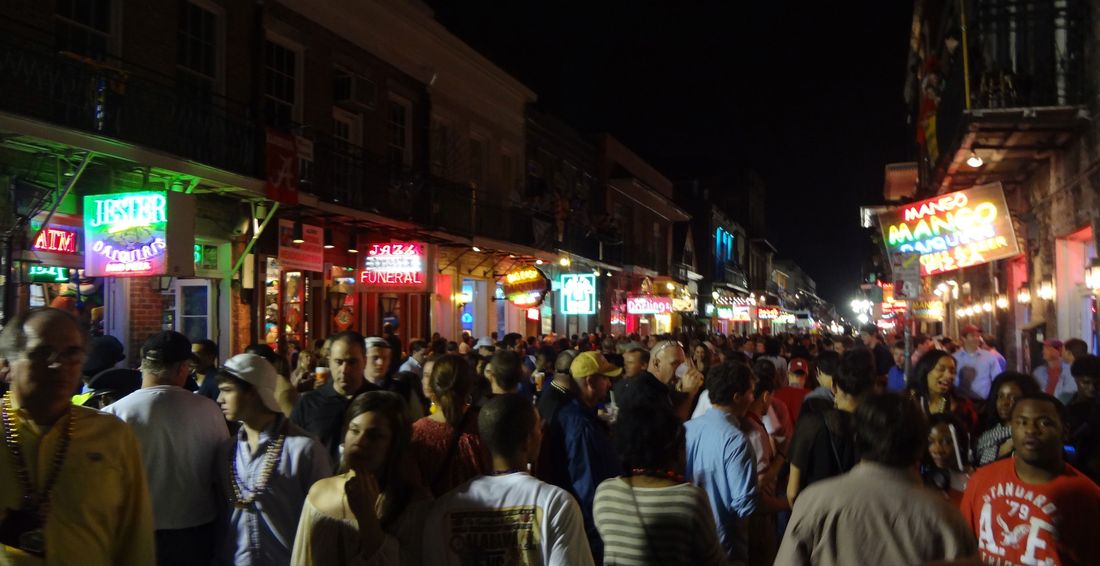 And yes, that baby would definitely have fetal alcohol syndrome.

"THE BEST POLITICAL CONVENTION EVER." A friend back home asked me to describe the scene this weekend, and that's what I came up with. People come to watch football, but half the virtue of making the trip is showing up to show your support in person. Like how everyone wears their team's colors at all times. There's a symbolic aspect to all this fanaticism. And a bureaucratic one, too.

For Bama and LSU as schools, this is by far the biggest weekend of their year. So for every drunk college kid you see at night, during the day you'll see just as many 40 and 50-somethings who look like donors. And they're walking around town, soaking in the one weekend where all their hard work (and money) pays off. All of which is to say that between the borderline psychotic devotion of the people who attend, the strained civility between opposite sides, the spontaneous chants that break out every five minutes, and the social aspect that almost upstages the stated reason for making the trip, it all feels like a political convention.

Except we're in New Orleans and it's football, not politics, so nobody has pretend to be an adult about all this. In other words, it's a thousand times cooler than the best political convention ever.

THE CRAZIEST PART. In the past 48 hours New Orleans has seen an NFL playoff game, hundreds of thousands of people flooding the city in Crimson and Gold, day-long pregame parties, a poodle with 'LSU' shaved into its fur, fans showing off Alabama tattoos in exchange for free drinks, two massive pep rallies in Jackson Square, two nights on Bourbon Street that didn't stop til daylight hit, strangers chanting at the top of their lungs all day long, concerts in the streets... And the craziest part is that this was basically just a warmup. The National Championship is now less than 24 hours away, where the two best teams in the country finally settle a year-long debate on the field. And now it all gets a whole lot crazier. 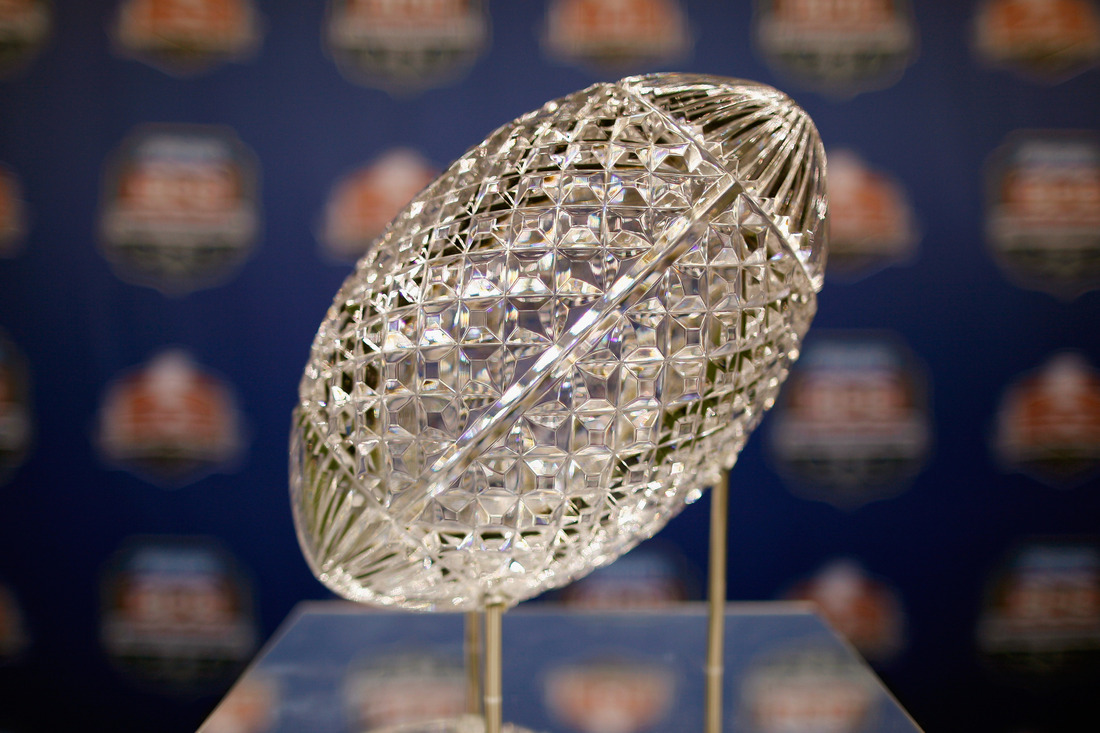