Share All sharing options for: PHOTO: Malik Golden's Brother Is A Future Star

Malik Golden signed with Penn State on Wednesday and overall it was a pretty run-of-the-mill deal. It wasn't a surprise, he didn't flip at the last moment and there was nothing rather extravagant about it all. Yet it was Golden's signing that produced one of the more hilarious signing day photos.

And Golden wasn't the star of this show: his younger brother was. 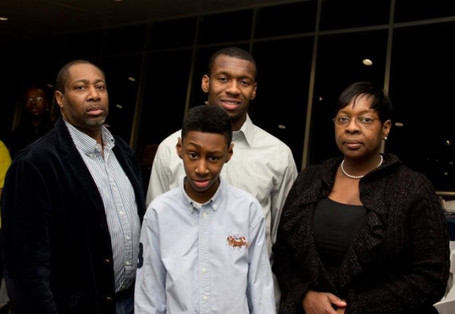 Here we have a serious-looking mother and father, stoic as parents tend to be. Golden is in the back with somewhat of a half-smile on his face. Then you get to the young man front and center. Bam! Raise that eyebrow, young fella.