The Baylor Bears continue their season of good news, announcing the "largest capital gift in university history" for the purposes of a new, on-campus football stadium. And based on photos the athletic department is releasing of that stadium, somebody's paying for a mighty pretty building. This is all just concept art, of course, but still: 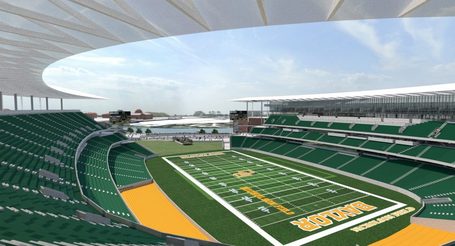 That bowl awning gives the whole thing sort of a soccer look, and situating it right on the water would make for some of the country's best views from day one. The targeted completion for the new stadium, if all goes well: 2014.

The new on-campus Baylor Stadium is expected to be built on a 93-acre site on Interstate 35, one of the nation's busiest highways, traversed by more than 42 million drivers annually. The stadium will hold 45,000 spectators, with the flexibility to expand to 55,000 in the future. It also will feature a bridge crossing the Brazos River and connecting the stadium to the campus, canopy shading for half of all seats throughout the day, open concourses with views directly into the stadium, suites, loge boxes, indoor and outdoor club seating, designated seating for Baylor students and the Baylor band, and an event center and Stadium Club for year-round use.