This Week In Important Science: What Would Make The Loudest Football Stadium Possible?

We asked acoustics engineers and other scientific types to design the loudest possible environment for a sports team to call home. The results are terrifying.

Share All sharing options for: This Week In Important Science: What Would Make The Loudest Football Stadium Possible?

Putting acts of God or meth addicts having midnight fun aside -- hope you died horribly years ago, guy who dropped a cinder block on my car from an overpass in Tampa! -- the second-loudest thing my ears have ever heard came on Oct. 6, 2007, in Baton Rouge, La. LSU was steadily chipping away at a lead against Florida, and closing in on a possible No. 2 ranking. Number one was USC, a spot it could not possibly lose to Stanford that night in a formality of a game.

Jim Harbaugh likes formalities, especially the glow they make when you set them on fire and watch the glory from a safe distance. A rolling murmur already rippled through the crowd, since some with cellphones fortunate enough to get a signal had yelled out to anyone listening that the score had to be wrong, and this couldn't be right, but a 41-point spread was a cover, but not for USC, and seriously, guys, let's check this again because Stanford did NOT just beat USC.

The Tiger Stadium PA announcer followed with a dramatic, staccato delivery: "Stanford 24, USC 23." Then, I thought a bomb had gone off somewhere in the student section, or maybe right behind me, or to my right. LSU fans, at that moment, were the loudest piece of ordnance in the world, and their lungs were fully weaponized rage-cannons bombarding the air with glee.

The LSU fanbase is loud anyway, but that one moment of sonic overload had an essential accomplice: Tiger Stadium. Steep banking trapped sound inside the stadium, an effect enhanced by the blocked-in endzone sections. The hard concrete of the stands reflected sound, while parallel seating created two gigantic screaming subwoofers pointed at the field. It was bad on the field, with effective communication reduced to three meters or less in most cases, but it could have been worse: the only thing Tiger Stadium lacks is a roof, the ultimate reflector of crowd noise.

Bourbon and enthusiasm are certainly part of the equation, but science and construction plays a much larger part in the construction of loud, louder and the loudest sports stadiums in the world. If you want to build the world's loudest stadium -- and when we sell our formula for alcoholic milk for massive profits and decide to buy a sports team, we will do this very thing -- you need to know the basics of building a proper beehive to terrify your opponents into submission.

To this end, we asked acoustics engineers and other scientific types for a few simple guidelines we could use in building the loudest possible environment for a sports team to call home. Fan comfort and aesthetics were not a priority here. If the world's loudest stadium needed to resemble an aluminum coffin lined with view-obscuring plexiglass, then so be it. Absolute volume without the use of speakers or other noisemakers was the only priority given to our panel.

Our blue ribbon panel's general rules for maximum volume in your sporting environment:

1. Go steep, and go high. You need elevation, and not just for reverb. Steep seating means your screaming goes out into the air, and not into someone's back, making each possible output as clear and unimpeded by interference as possible. Want to know why Clemson's Death Valley is so loud despite low, almost open endzones? A steep angling of the stands is one reason, though another key number helps out, too.

Sidenote: this is where you might say, "Oh, that's why Michigan is so quiet." Relatively speaking, yes, but the wok-like shape of Michigan Stadium still puts out a tremendous amount of noise despite design. Change the angle on the seats and you've got a veritable orbital death ray of stadium noise.

2. Stay narrow. Distance reduces power, so you'll want the stands as close to each other as possible on the sidelines. The New Orleans Superdome is loud, sure, but not as loud as it could be given the wide sidelines. In contrast, Florida Field, Bryant-Denny Stadium, and Autzen Stadium all put the fans in varying degrees of "sitting in the ear of the opposing coach," and keep their sideline distance to a minimum.

3. No sieves. Escaping sound is wasted sound, so all entrances and gaps should be filled in completely. Bryant-Denny Stadium was already loud, but following the completion of the stadium expansion it may be the loudest place in college football thanks to very few unblocked spaces in the stadium's bowl-like shape. Ditto for Florida Field, Beaver Stadium, and anywhere else that wisely closed off its open endzones. Ohio State operating with an open endzone is iconic college football architecture, but it is also a profligate waste of sonic energy. (This is sort of like Ohio State's own "cutting up a Maybach for our video" moment. They're so rich in this and other ways they can waste things for style's sake.)

4. Concrete matters, and people are a soft surface. No soft surfaces whatsoever, since soft surfaces absorb sound. People qualify as a soft surface, by the way, so if you can, put plexiglass everywhere and "make the whole stadium out of metal," in Alessandro's words. We think he's joking there. (We think.) Can you get your fans to wear suits of armor? That'd be helpful, too.

Failing that, turn each row of stands into a concrete-lined bunker, and have fans yell out of the gunner's windows.

5. If you like it then you should have put a roof on it. A long, flat roof made of hard stuff is the ideal reflector for crowd noise. Most pro stadiums stay narrow enough to trap noise, but let it float around the mezzanine level without reflecting said noise back down to the field. A roof does that well, and makes conditions on the field almost unbearable for competitors. (And that's one of the things we're clearly trying to accomplish here.)

If you don't have a roof, then awnings are highly recommended. Husky Stadium has a documented 130-plus decibel reading, something undoubtedly helped by the long awnings over the sideline stands. Domes may be indoors, and thus antithetical to football's all-weather ethos, but they are also tremendously loud things in the right hands.

The official Guinness World Record belongs to Turkey's Turk Telecom Stadium, home of soccer club Galatasaray. It has a flat, removable roof, is seemingly designed solely for the production of noise, and is indeed hellishly loud. Volume fiends, take notice and pay respect to the combination of design and fury on display below.

These are the basics. Of course, the basics are not enough for engineers, especially PhD student Andy, who went a step further with the project, and then went slightly and brilliantly insane.

Conic reflectors: sound that reflects out of a conic section (you'd have to design a particular shape) can be focused onto one point. So I've make my awnings a parabola/ellipse hybrid that could be rotated slightly, so as to constantly aim at the opposing team.

Synchronized handclaps: a single, synchronized handclap from 100,000 people would be terrifying. Complicating this somewhat is the fact that sound travels at a finite speed (about 1000 feet per second); you'd want to synchronize the entire crowd such that the handclap arrives at the same point simultaneously, with minimal delay between arrival times. It'd make for a thunder-like effect. I'd suggest synchronizing it via video boards in the stands - you'd calculate the position of the team and stagger the feed just slightly; once the crowd got into a rhythm, it'd get really crackin'.

Vibration waveguides: If people are stamping their feet on the stands, vast quantities of that vibration are being channeled into the concrete of the stadium, from which it will never return. I'd design waveguides under the stands that turn that vibration energy into acoustical energy, then direct it towards the field. There are obvious structural problems with placing a heavy, reflective surface above a waveguide (which would be a lightweight structure), but this is a mental exercise.

Standing Wave Properties: in sufficiently reverberant environments, you can generate standing waves. The end result here is that there are pockets of near-silence, followed by regions of extreme noise (the amplitude follows a sine wave pattern across the field). You'd need incredibly reflective, vertical and parallel (so a rectangle around the stadium) surfaces around the stadium to do this, and it would be most effective in the sub-audible range, but the result would be terrific.

So maybe that would be my ideal setup: 10-foot rectangular walls around the stadium, with waveguides directing vibration energy from the stands, then nearly-vertical stands (shaped parabolically at the endzones) that are covered by a movable conic awning. Filled with insane, screaming-and-clapping-and-jumping fans

We are certain that a quarterback can and will one day take a sack from the impact of 80,000 people clapping at once. That quarterback is a 54-year-old Jon Kitna coming in to relieve an injured second-stringer for the Bengals in 2022. Do not act like this isn't in fate's designs.

Another panelist, Chris Radomile, went a step further and designed an entire stadium. 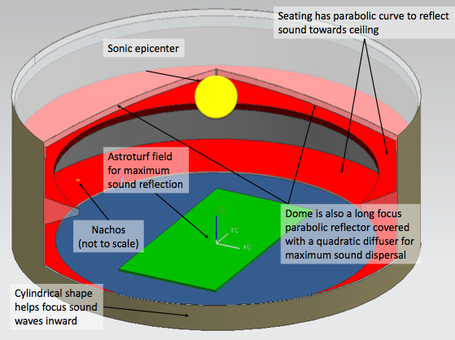 Remember: nachos (not to scale.) His report, which you may read here, also includes this undying piece of engineering jargon.

That feedback loop is of course only as good as its basic batteries, which is where the average fan not gifted with a few hundred million dollars and sway over an athletic department's designs can take comfort. Autzen Stadium's 54,000 are half of what can pack into gigantic Neyland Stadium, and yet have enough amassed lung power to get on-field decibel readings into the high 120s.

That's crowd horsepower equal to what you'll hear almost anywhere, and the result of both design and fans determined to shred vocal chords in the name of homefield advantage. Design can only turn the volume dial so far to the right. The rest involves caring about exciting and competitive football fans can get raucous about, the kind of thing athletic programs spend millions on in the form of coaches' salaries. By this logic, Chip Kelly, Nick Saban and Urban Meyer are not just managers of football programs, but also some of the world's most expensive outdoor stereo systems.

Special thanks to our panelists Chris Radomile, Andy Jessop, Alessandro Miglio, and Brad Blackwood for responding to the challenge.