A group of about 200 supporters of Arkansas Razorbacks head coach Bobby Petrino gathered for a rally in The Gardens Monday night with the intention to influence Athletic Director Jeff Long to retain Petrino as the head coach, the Associated Press reports.

From Chris Bahn, right when the rally was beginning: 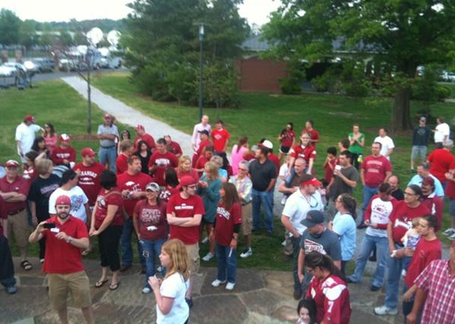 Rally organizer Matt Couch was happy with the turnout, which he conceded would not have occurred had the Razorbacks not finished 11-2 and ranked in the top 5 in 2011.

"We're not condoning what he did morally," Couch said. "We are disappointed in him, but he's still our football coach and no one's perfect.

"I wouldn't ask him for marriage counseling, but at the same time we're supportive of him and we want him to do well."

The rally was held just hours after the Arkansas State Police released a memo stating that the trooper assigned to protect Petrino on the sidelines took a call from an unidentified woman to come and get the head coach following his April 1 motorcycle accident.

Go to this StoryStream for more on Petrino's accident and the fallout. For more on Hogs football, visit Arkansas blog Arkansas Expats, plus SEC blog Team Speed Kills.