The Cy-Hawk Trophy: A Study In Persistent God-Awful Design

Share All sharing options for: The Cy-Hawk Trophy: A Study In Persistent God-Awful Design

In-state and regional school rivalries are one of the best things about college sports. The annual meetings between two local powerhouses are always fraught with excitement and emotion. The populace drinks whips itself into a frenzy and when the smoke clears, one of the teams gets all the bragging rights. "I won the Battle of Salt Plains!" they might cry. Or perhaps "We did it! We prevailed in the Rumble in Elko!" But there's always a trophy or artifact that the teams are fighting for. A physical representation of their victory. Some games are for a boot, a bell, a cup, a flag, or even a mighty axe. But the battle between the Iowa St. Cyclones and the Iowa Hawkeyes is for the Cy-Hawk Trophy... a trophy that doesn't currently exist.

The Cy-Hawk Trophy has been around since 1977. It wasn't terrible (full disclosure: it was actually pretty terrible), but the teams chose to retire it in 2010 and proceed with a new design. What they settled on before the 2011 season was pretty atrocious. It featured a group of good, honest Iowans gathered about a bushel of corn -- you know, as Iowans do -- and looked way more like a Precious Moments figurine than an actual football trophy. Upon the unveiling of the new trophy, public response was, shall we say, "bad." Fans pointed out that there was nothing present in the design that would suggest anything having to do with "football." Then they probably made a throat-slitting gesture. I'm not sure. The documents are unclear on this last point.

So bad, in fact, that the trophy was scrapped altogether. For 2011, an interim Cy-Hawk Trophy was cobbled together using leftover wood shop scraps, old VCR pieces and parts of a broken "G.I. Joe Headquarters" playset. It's hard to say whether the scrapped design or the last-minute trophy was worse, but let's just say "Blech" and move on.

The schools are determined to have a real Cy-Hawk Trophy in 2012, so they have commissioned several designs which will be voted upon by fans and shall forever be the once and future Cy-Hawk Trophy, forever and ever, amen.

Scott Dochterman of The Gazette attended an Iowa open practice on Saturday and tweeted out some of the designs for the new trophy. Guess what? They're all terrible. All photos courtesy of @ScottDochterman.

First up is the "Mascot Football Concept" which features the two school mascots awkwardly holding up a massive football. In the background are the stoic stalks of corn, which are meant to represent corn. 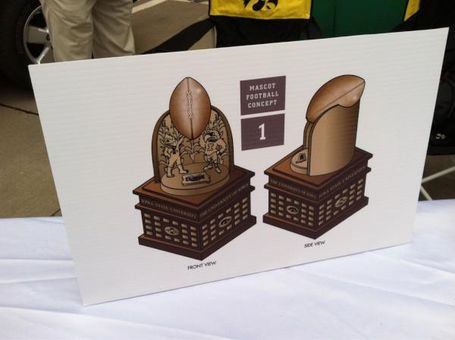 Next up is the "Corn Football Concept," which depicts a football ... uh ... blooming out of a corn husk. WELCOME TO IOWA WHERE THE CORN ITSELF HAS BECOME FOOTBALL. 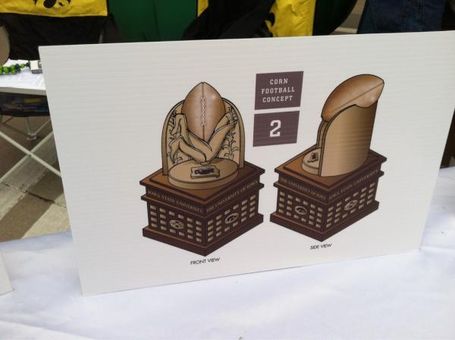 And finally, there is the "Corn Stalk Concept." Did you know that the state of Iowa is known for the presence of corn? Little-known fact. This last design is by far the laziest, but also has the added bonus of being incredibly suggestive. Ahem. 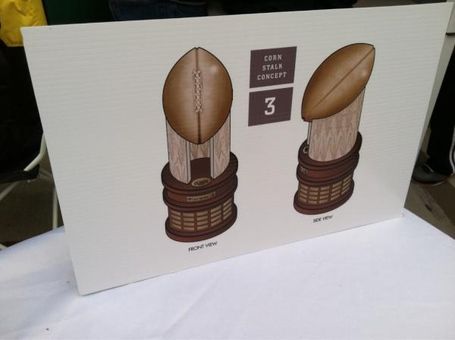 So there you have it. The first three designs that we've seen, none of which are particularly good in any objective way. They all fulfill the state-mandated requirement that corn be glorified, sure, but why is every attempt at the Cy-Hawk Trophy so horrifically awful? Did all the good graphic design students get wiped out in the Art Institute fire of aught-eight?

It shouldn't be hard to come up with a cool, compelling design for something already called THE CY-HAWK TROPHY. It's a hawk fighting a cyclone, for god's sake. Hell, put a hawk IN a cyclone. That would be pretty bad-ass. But no, husk some corn, get a football. Oh well. War damn Iowans.

For all news and information regarding the Iowa Hawkeyes, please visit Black Heart Gold Pants. For updates and perspective on the Iowa State Cyclones, head on over to Wide Right & Natty Life.