2012 College Football Schedule: The Must-Watch Games Of Every Weekend

The 2012 college football schedule is complete enough to call it complete, so let's review the best and biggest games, week-by-week. Here's the whole national schedule, for reference and so that you can correct my misjudgments. Follow @SBNationCFB

Share All sharing options for: 2012 College Football Schedule: The Must-Watch Games Of Every Weekend

Now that the MAC's gone and released its 2012 slate, the entire upcoming college football schedule is pretty much upon us, pending an adjustment here and there and probably bigger teams dumping pretty easy FCS games for really easy FCS games. That sort of thing.

However, we know enough of the 2012 schedule to start planning out our weekends, so let us do just that. Here we have the six most watch-worthy games from each full weekend of the coming college football season.

But Notre Dame doesn't know whom it's quarterback will be, and whichever guy it is will just end up fumbling away two touchdowns, and Navy doesn't have any players you've ever heard of, and that's fine. The Irish are playing in Ireland (and hopefully they'll get there by boat, because Navy), and the stadium looks like this:

Shamrock a pint o' Guiness to me, boys! Brogues for all the mates, as fresh as green soap! I don't know how to speak Irish.

Michigan-Alabama (Dallas): Denard Robinson may have already thrown two interceptions. I'd kinda rather watch Toledo-Arizona. This list is a lie.

Boise State-Michigan State: Replacing Kellen Moore while halfway across the country and staring back at William Gholston? Some guys have all the fun!

Washington State-BYU: Mike Leach makes his Wazzu debut against the school that gave him the football bug in the first place.

Arkansas State-Oregon: Gus Malzahn's offense won't be up to speed just yet, but DID SOMEONE SAY SPEED BECAUSE THERE WILL BE LOTS OF IT

Both Mizzou and A&M make their SEC debuts this week, and each takes on a major foe in the process. But the nation's No. 1 recruit, Dorial Green-Beckham, might end up being covered by a fellow wide receiver, thanks to Georgia's secondary struggles. Who said attrition isn't fun? 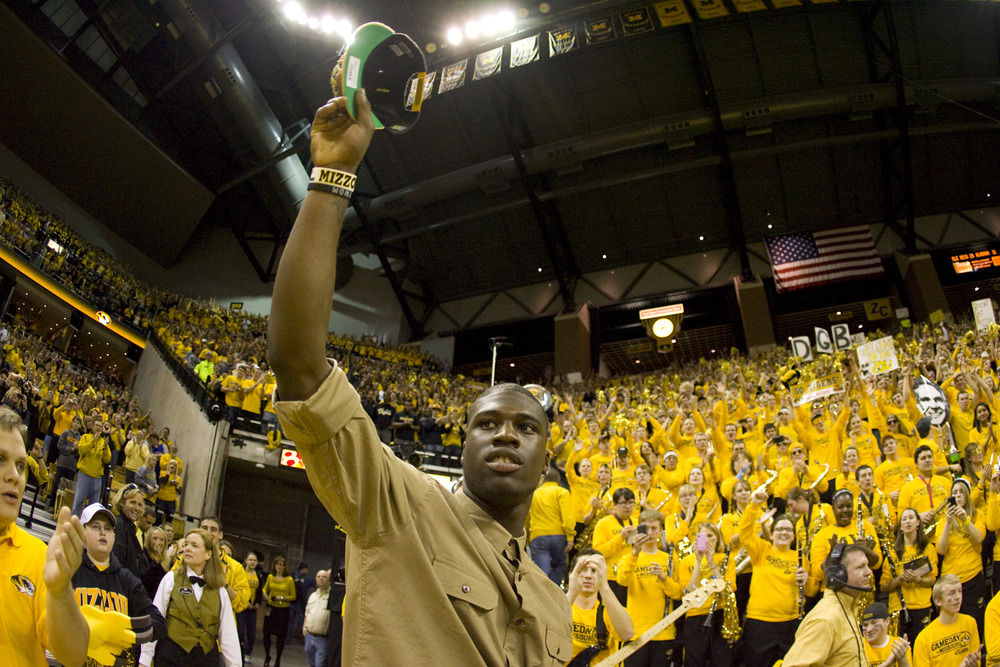 Florida-Texas A&M: The easy thing to say about every A&M game against a SEC opponent: boy, what a culture clash! There are plenty of reasons it's so easy. Florida's one.

Washington-LSU: You know, Keith Price could be one of the two best quarterbacks LSU faces all year.

Penn State-Virginia: This doesn't sound especially fun, but we should check in with Bill O'Brien at some point early on. Sup, Bill.

Perhaps the first all-top-five matchup of the season. Tyler Wilson may cement his status as the toughest man alive, and if the Hogs can pull off the upset, we'll finally have to take them seriously as title contenders. But we'll have to avoid this as much as possible: 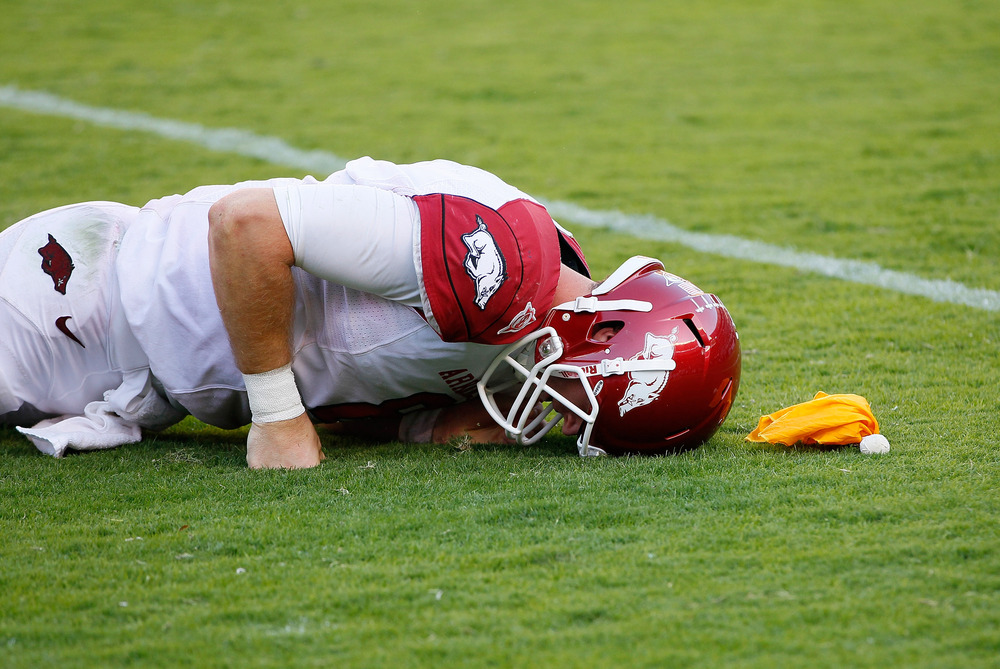 USC-Stanford: If the Trojans are going to make a title run, they'll have to conquer the Cardinal for the first time since 2008. Hello, not Andrew Luck!

Arkansas State-Nebraska: Let's say Malzahn has the Red Wolves a little bit more tuned up by now. Let's also say anybody playing Nebraska is capable of giving Nebraska a game.

Northern Illinois-Army: MACtion vs. the option. Start nerding out now.

California vs. Ohio State: Though Cal teams are traditionally bad travelers, we still ought to see what Urban Meyer's up to.

Not going out of my way to watch the Irish, but this is the sort of thing that happens when you pretty much schedule nothing but bowl teams. Let's hope playing at night again makes this year's edition half as nuts as last year's.

All of the lights in here, baby:

Clemson-Florida State: Perhaps the highly unpredictable ACC's least predictable teams. Would you agree with that?

Missouri-South Carolina: Let's say Mizzou tops Georgia and gets a little bit of instant SEC momentum going. What happens if we say that?

East Carolina-North Carolina: We're just gonna watch every direction's worth of Carolina this week. Two active offenses and a look at Larry Fedora.

Kansas State-Oklahoma: K-State doesn't stand a chance, just as it hasn't in all of the far too many other games it keeps winning.

California-USC: It's just fun to look at USC is all. Kinda wanted to put Akron-Tennessee here. Terry Bowden's SEC return.

One of the few natural rivalries for the SEC new guys, with a frozen portion of Jerry Jones' heart being awarded annually to the winner. If A&M is leading at halftime, prepare yourself for a joke or two. Also, hope to see a familiar, friendly face:

Oregon-Washington State: Chip Kelly vs. Mike Leach. Every other Pac-12 game can now be tantalizingly described just by naming the head coaches involved.

Wisconsin-Nebraska: Danny O'Brien gazes up at the Sea of Red, wondering why it looks like dozens of Maryland crowds all gathered at once.

Baylor-West Virginia: Baptists in Morgantown, y'all.

Ohio State-Michigan State: We promise this will be infinitely more watchable with Urban Meyer around. Understandable if you can't bring yourself to tune in. We all bear scars.

WVU's true welcome to the Big 12, against an orange defense that won't be quite as compliant as the last one was. 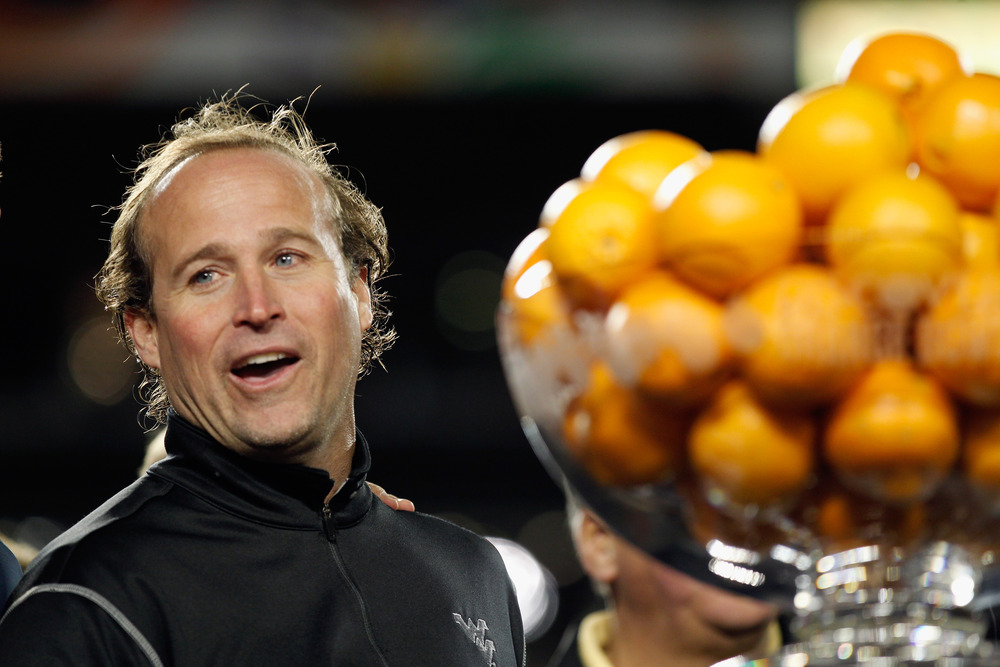 Arkansas-Auburn: An annual pointsfest, but what happens when one participant settles down its offense while fortifying its defense?

Washington-Oregon: Really putting a lot of stock in the Dawgs scoring like they did in that one game last year. That's usually the most accurate projection method.

Georgia-South Carolina: It won't be pretty, and it will somehow be won on a muffed punt in overtime, but the victor could again be in very good shape.

LSU-Florida: If we pretend the SEC was really about to get rid of its protected cross-division rivalries, events such as this one feel more important. Try it!

On its appointed date, the Red River Shootout Rivalry Shootout will arrive caked in batter and divided down the middle, just as it is every year, by God. Not the only rivalry that survived conference realignment, but maybe the only one involving two teams so tied together that they'll switch leagues, but only if they still get to hate each other every year.

TCU-Baylor: Right! TCU changed conferences too. A repeat of a top-five game from last year, though sadly lacking the guy who made it so.

Alabama-Missouri: Whatever notion Mizzou has of itself to this point, it will be torn to the ground. I'm not even saying the Tigers will lose. Just that world views are about to warp. You'll understand in time.

South Carolina-LSU: If only this game were in SC. Zach Mettenberger's arrival would be a semi-messianic event in Columbia, seeing as he's basically Stephen Garcia in ... no, not really even in disguise.

Compared to the average rivalry, in which minor cultural differences make for massive points of contention, LSU vs. Texas A&M looks like two alien spaceships hovering past each other. One of them is leaking gumbo and is not actually a spaceship but rather a gigantic Mardi Gras spacefloat, and the other is even weirder. 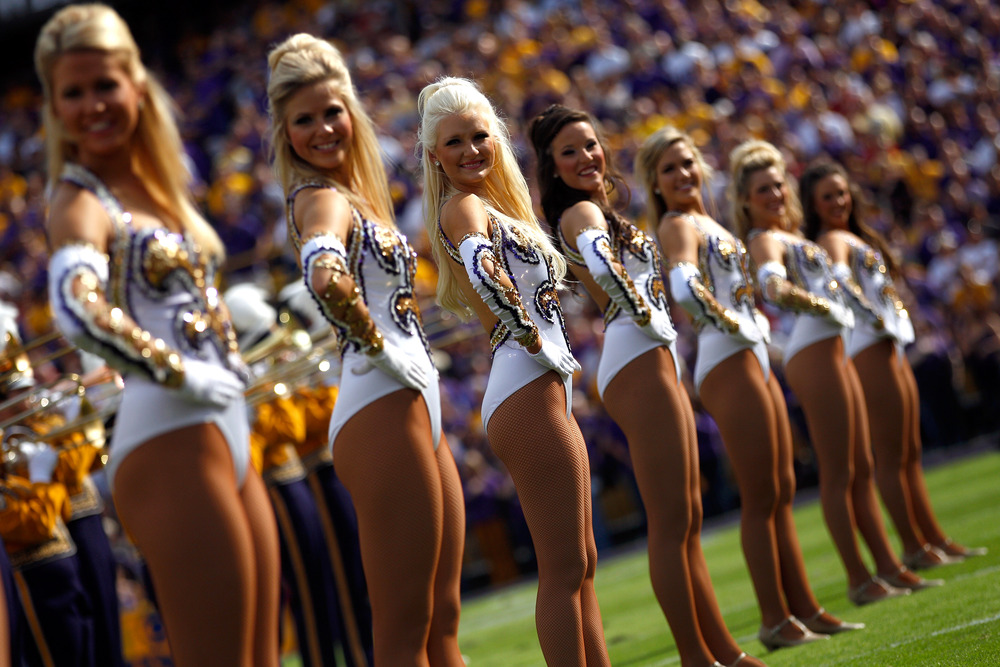 Those are definitely not A&M's cheerleaders.

Michigan State-Michigan: ALL OF THE PERSONAL FOULS

Florida International-Troy: You're going to need to watch next year's hottest coaching candidate, Mario Cristobal, at some point this year, and it might as well be against the classical champs of the Sun Belt.

Iowa State-Oklahoma State: There is no price T. Boone Pickens will spare in order to keep Joe Tessitore from calling this game. Actually, it might be a good idea to just not stand anywhere near Joe Tessitore for a while. T. Boone observes all.

When it would actually be a surprise if a game didn't end on a Hail Mary, you've got yourself a game of the week.

Florida-Georgia: Marvel as the Southeast's worst and most wonderful instant city hosts maybe like 31 combined football players. These teams lose a lot of players, you see.

Arkansas State-Louisiana-Lafayette: Yes, we're going to be watching Arkansas State more than usual this year. Will Gus Malzahn's schemes work against this man? 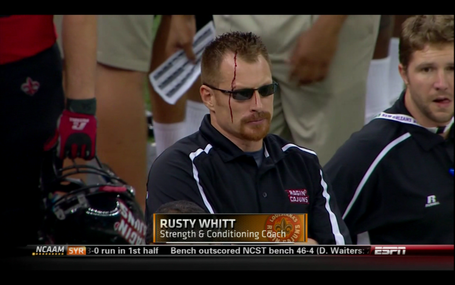 OH FOR LAND'S SAKE, ANOTHER REMATCH? 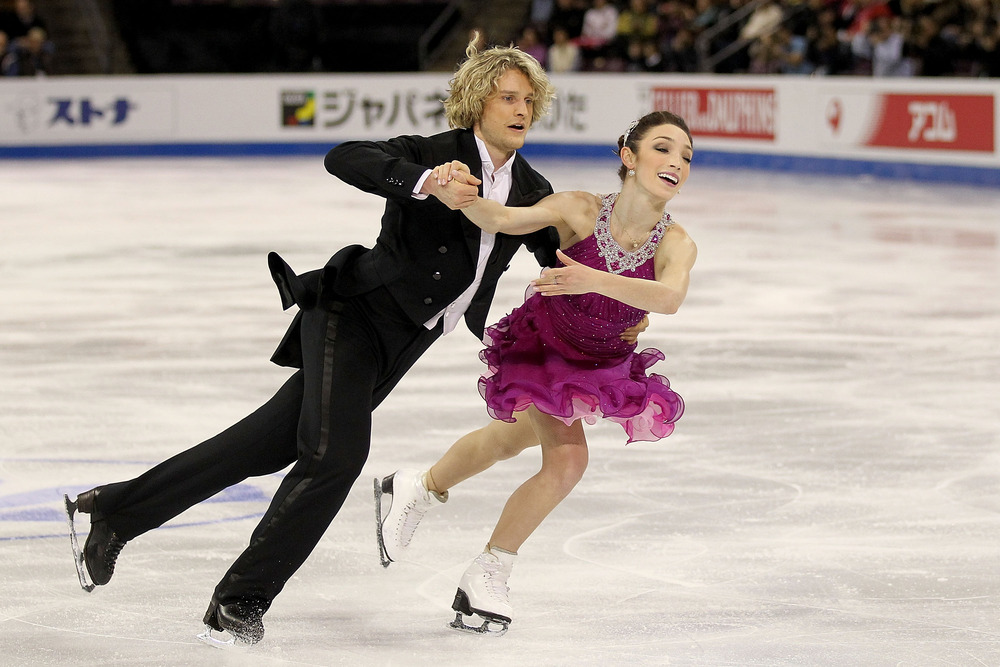 The above photograph has nothing to do with Alabama-LSU.

Oregon-USC: (Pssssssst! This could be an even bigger game than the one right above it!)

TCU-West Virginia: Plan ahead, friend. When that thick fog starts rolling in during the third quarter, you'll need to know which smoke-themed punch line to reach for first.

Virginia Tech-Miami: That one last year was pretty good, so it'll probably keep being good, due to the Law of Thermodynamics.

Nebraska-Michigan State: Swear we've done this one like four times already. I am not watching Nebraska this many times no matter what you say. Will definitely be watching Boise State-San Diego State instead. 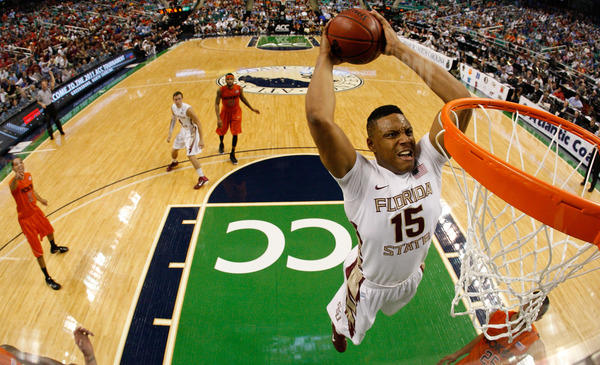 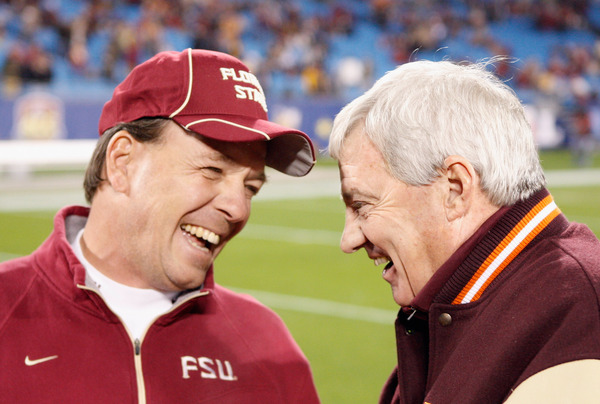 West Virginia-Oklahoma State: Don't tell anybody, but I'd rather watch Holgo's return to Stillwater than the one above.

Ball State-Toledo: I don't really need to tell you to watch the first Tuesday night game of the year, but it's critical we all make note of it right now.

Vanderbilt-Ole Miss: Not necessarily for fans of technical football, though the Rebels might move the ball a lot by this point in Hugh Freeze's first year. Vandy's fun to watch. And Ole Miss could start being fun to watch for better reasons than it has as of late.

Louisiana Tech-Texas State: Sure, Arkansas-South Carolina is big, but we're trying new things this week, you see. La Tech is always fun, and you've never watched Texas State before. Live a little! This week is completely off its rocker.

The crown pinnacle of MACtion. The sweetest Wednesday night of them all. The complete opposite of Alabama-LSU. Like watching your little brothers play video games. But, no, not a football video game. This video game:

Stanford-Oregon: No LaMichael James, Andrew Luck, Darron Thomas, Coby Fleener, and so on and so forth. So?

Utah State-Louisiana Tech: You'll have a harder time finding a game this year more likely to end in complete HAM, so long as you can, yanno, find this game to begin with.

Wofford-South Carolina, Georgia Southern-Georgia and so forth: Remember that one weekend last year when a bunch of SoCon teams gave a bunch of SEC teams utter hell all at the same time? That was fun.

The finest week on the sporting calendar, IMHO. It takes a lot to rank first here.

You know how Michigan and Ohio State fans say this game is bigger than any other, including whatever happens afterward in the postseason? The Buckeyes don't get a postseason this year. Their bowl game is nothing but a chance to ruin whatever Brady Hoke's got going. That's big stuff. 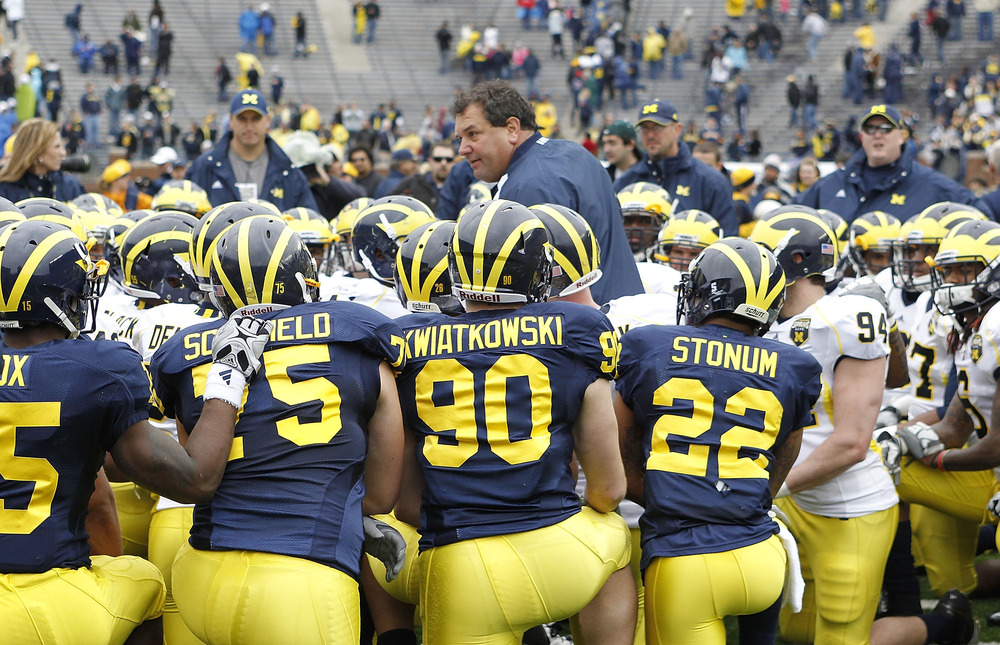 TCU-Texas: Your Thanksgiving pretty much now entirely revolves around Dallas football, unless you're just a really big Detroit Lions fan. Maybe you are! Everybody kind of likes them a little bit. Do you think the Lions are the least-disliked team in pro sports?

Auburn-Alabama: A moderately popular sporting contest in a certain corner of the world.

Wisconsin-Penn State: The Windbreaker Bowl, a.k.a. WINNER GETS NEXT YEAR'S ACC QUARTERBACK TRANSFER.

South Carolina-Clemson: My personal nominee for college football's most disdainful rivalry. Besides the Iron Bowl.