Share All sharing options for: PHOTOS: NCAA Football 13 To Include Rivalry Trophies

EA Sports released the first pieces of specific changes coming in NCAA Football 13. The most obvious is some new graphical stuff including rivalry trophies, like LSU-Arkansas' Golden Boot and the world famous Iowa Pig, which Iowa earns by beating itself. I made that last part up. However, any list of rivalry trophies that does not include Memphis-UAB's Bones is completely invalid, so we'll wait and see on that one. 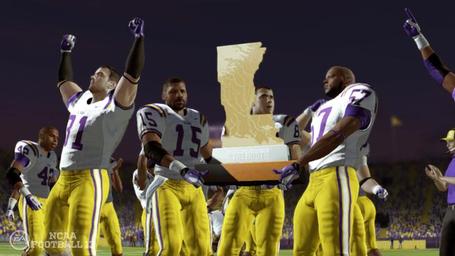 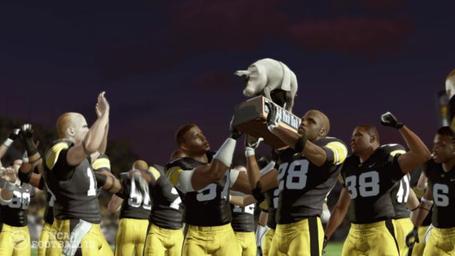 EA also details some audio improvements, including real crowd audio recorded at a couple dozen different stadiums of various sizes last year from all across the country. Brad Nessler and Kirk Herbstreit return on the mics, but EA says it's trying out a new engine this year that should result in more life-like commentary this time.

Audio has drawn complaints in recent years, with stadiums too often sounding a little too professional in atmosphere and similar commentary lines growing stale from year to year.

For real though: Bones or we riot.