In no particular order, the 10-ish stars of college football's spring game weekend:

Tyler Wilson, Arkansas: The new Boss Hog and "the face of the program," according to defensive coordinator Paul Haynes, began the post-Bobby Petrino era by taking on pregame speech duties, something traditionally reserved for the Razorbacks head coach.

Throwing for 467 yards and three touchdowns is not a task for the average head coach, however, no matter if it's in front of the biggest spring crowd in school history or not. The reserves getting blown out, 65-0, by the starters would be cause for concern, if Arkansas didn't already have enough concern for the time being, but the immediate future looks to be just fine with Wilson in charge.

Shane Beamer and company, Virginia Tech: The Hokies weren't able to conclude spring festivities in formal fashion, thanks to Blacksburg weather, but still walked away with five 2013 commitments and a head start on 2014, including landing big four-star quarterback Bucky Hodges.

Beamer, the Hokies' star recruiter, credited VT fans with making his job easier. Before the game, he noted state rival Virginia's 8,000 fans in attendance at the Cavs spring game would be an okay Hokies crowd -- for pre-game, at least.

Mike Leach, Washington State: Marquess Wilson was more or less in his coach's dog house, but still caught an 80-yard touchdown in the opening minute of the First Annual Pullman Pirate Expo and finished with 149. Jeff Tuel missed just twice in 21 attempts despite his leading rusher posting 26 yards and Logan Mayes producing 4.5 sacks. Backups David Gilbertson, Cody Clements and Jesse Brown combined to go 21-of-30 for 283 yards and two picks. All in front of a crowd of 10,713, more than double last year's.

And after the game, Leach, Tuel and Wilson himself all noted that now that they know what the receiver can do, it's time for it to keep happening. Ahoy!

Jordan Lynch, Northern Illinois: Last year, Chandler Harnish was the MAC's best player and might've been statistically the best quarterback in the country. That loss plus offensive coordinator Matt Canada's flight north (to ... not Canada -- Wisconsin!) surely doomed NIU to -- holy smokes, 402 yards and four touchdowns on Saturday, Jordan Lynch? And coach Dave Doeren says Lynch might be a better runner than Harnish was, even though Harnish ran for 1,379 yards as a senior?

Lynch was able to put up numbers in relief last year, and if he's able to keep it up, the MAC could be in danger of letting a team score a bunch of points. Perish the thought!

Urban Meyer, Ohio State: Not only did the Buckeyes lead the nation in spring game attendance once again despite drizzly weather, uncover a freshman star in Michael Thomas (who literally did a season's worth of work) and pick up a four-star commitment, they ran the Oklahoma drill on the field before the game -- at one point pitting Meyer's prized pupil, quarterback Braxton Miller, against his backup as the whole building collapsed:

Charlie Moore, Oklahoma State: How do you replace Justin Blackmon, perhaps the best player in school history? Well, throwing around a bunch of big ole spring stats isn't going to cut it, but nine catches for 243 yards at least serves notice that the Pokes haven't emptied their barrels, so to speak. That he's a converted quarterback is of note as well, since OSU's three actual quarterbacks still weren't been able to distinguish themselves.

That Mike Gundy sounded so surprised may not be the best sign for more of this in the fall, but perhaps Gundy can keep being surprised:

"Charlie Moore probably surprised everybody," Gundy said. "He was kind of Johnny-on-the-spot, but he's done well all spring. I'm guessing he had some big numbers. That would have been a surprise. I don't know that anybody would have predicted that he would have had that many catches for that many yards."

West Virginia's defense: That's the thing about spring games: there's always somebody to say something good about. Still, when the defense gets a win against the offense of a team that scored 70 in its last game, we can safely send game balls D-ward, no matter how springified the scoring system may have been.

And then there's, you know, Syracuse's defense (which gave up no points), Ohio's (which forced four turnovers from star Tyler Tettleton), and Maryland's defense (which got to play against Maryland's offense). What to make of these efforts will surely trouble us all offseason.

Tyler Russell, Mississippi State: The solo quarterback, a new venture the Bulldogs are trying this year, is off to a fine start. MSU hasn't had a one-man quarterback show in years, but Russell made his case with 312 yards on 43 attempts to be the solitary heir to the Chris Relf-Tyler Russell-Tyson Lee-Wesley Carroll-Michael Henig-and so forth lineage. He did this despite having only 60 yards with which to operate, having surrendered much of his turf to country band Sugarland. No, for real: 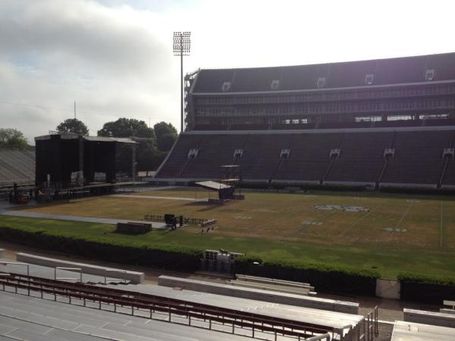 Zach Kline, Cal: Good news for the Golden Bears is always a thing worth celebrating, and a game-winning touchdown pass and two-point conversion by a true freshman counts as good news. Except for the fact that, you know, Cal's defense gave up all that to a true freshman. That's the thing about spring.

Zach Maynard remains the clear starter, but a little promise for next spring is always nice.