Arkansas Razorbacks coach Bobby Petrino was released from the hospital Tuesday morning after suffering a motorcycle wreck Sunday night. He's still made it to Arkansas' Tuesday afternoon practice, though his doctors have insisted he only observe proceedings from the press box. Don't ever let anybody tell you Bobby Petrino isn't tough, I suppose.

The worst of his injuries: four broken ribs and a damaged C2 vertebra. He'll be in this neck brace for a week or two. Via @ArkSports360: 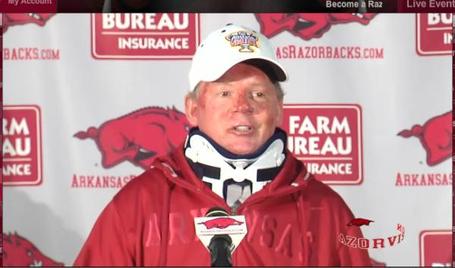 Petrino confirmed that he wasn't wearing a helmet during his bike ride and indicated he'll make sure to protect his skull from now on. Though his head itself didn't suffer much damage beyond scrapes and bruises, it's clear from that neck brace just how close this came to being truly serious.

He denied having had anything to drink and said he wasn't speeding at the time. He said the last thing he remembers before the accident was the sun shining in his eyes.

From the sounds of things, he's in good spirits:

Petrino jokes he has no brain damage, but "If I start not punting at all we'll know something is wrong."