Is Bobby Petrino really on the verge of greatness at Arkansas, or does the Hogs' traditional second-tier status make getting rid of him a harder decision than it should be? Related: Bobby Petrino coverage.

Share All sharing options for: Arkansas Should Fire Bobby Petrino (Because He's Not That Great Of A Coach)

The Razorbacks are one step away from routinely beating Alabama and LSU. Sustained national prominence is right here, and firing the head coach now would throw it all away. Arkansas should remain associated with a scoundrel whose biggest career achievement to date is beating Wake Forest in the 2007 Orange Bowl.

These are all lies, of course. Some coaches are worth getting your hands dirty for. There's a reason Oklahoma kept Barry Switzer until the NCAA finally put him on probation. And Louisville looked the other way when Rick Pitino paid for his mistress' abortion, because Rick Pitino is an elite coach.

Bobby Petrino is not an elite coach.

Bobby Petrino is a brilliant offensive X's and O's man. He's done instant scoreboard damage in each of his eight stints in charge of college offenses and cranked out constant NFL quarterbacks, with another on the way. There's a reason he gets offered so many jobs.

And Arkansas has had its biggest success in decades with him in charge. 2011 made for the Razorbacks' first top-five finish since 1977, and 2010 their first top-15 finish since ... well, Houston Nutt did that once too. The point is that things are looking up for the Hogs. This is a program that missed multiple times on native son Bear Bryant and saw Lou Holtz win a national title elsewhere, and now they've got a top-flight coach in his prime for the first time since joining the SEC.

But to assume that 21 wins over the past two years means a title is in the cards if Petrino is able to keep his job despite lying to his boss about hiring a mistress? He's a one-dimensional coach. It's time to sell high.

What would Jeff Long really preserve by keeping around a coach he could barely trust even before the motorcycle wreck, let alone after? Considering another 11-win season with miracle wins over Ole Miss, Vanderbilt and Texas A&M would be a major success, what's really at stake here?

Nobody's worried about Petrino replacing yards -- the 2011 team lost Ryan Mallett, Davis and D.J. Williams to little effect -- but I'm not sure how Arkansas can shrug off any offensive line losses. Last year, Arkansas ranked No. 74 in sacks allowed, with Wilson's line getting overwhelmed by the likes of Vandy. He's praised for his toughness, and there's a very good reason for that. He's had plenty of chances to show it.

Until Petrino shows he can build an SEC-quality offensive line, beating Alabama or LSU on any consistent basis is a fantasy. He'll put up a lot of stats against the top-heavy SEC's clutter, but keep coming up short against the best defenses.

And until he can field a defense that can regularly finish in the SEC's upper half, as he's done only once in his four years (No. 9 last year), you can forget about the Hogs winning their first-ever SEC title.

But Alabama and LSU lose that kind of talent every year. Who's to say Arkansas won't just reload like they do?

Louis Dover, who coaches at Seneca High School in Louisville, perhaps best summed up the feelings many people in football have about Petrino. "As a coach, he's a genius, he's one of the elite minds," Dover said. "Personally, well, he's a good coach."

Might that extend to recruiting as well? Think of the impression recruits talk about Nick Saban making or the rapport Les Miles develops with players, fans, broadcasters and all humans not from Indiana.

Take a look at SEC West recruiting rankings over the past five years: 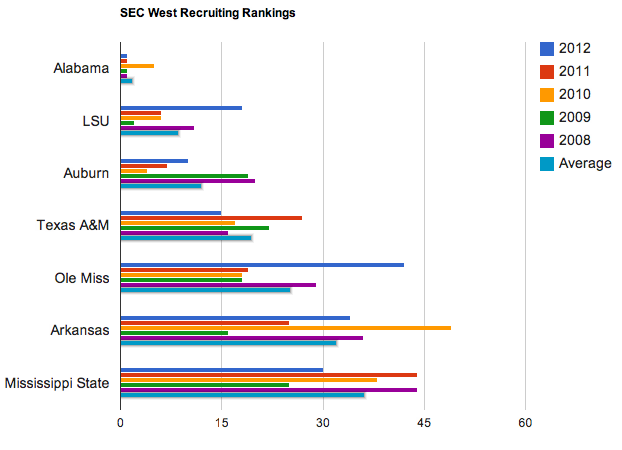 Nearly last, just a step above Mississippi State, the conference's biggest underdog. (Vanderbilt chooses to be an underdog, as its financial endowment is big enough to buy, well, Mississippi State.) Worse than Texas A&M, which now gets to recruit both Texas and SEC country. He already gets crushed on the recruiting trail every year, and that's before every mother in the South heard the Jessica Dorrell story.

With their state producing little elite talent, the Razorbacks have to steal recruits from elsewhere. Arkansas already couldn't recruit at an SEC level with Bobby Petrino as its head coach, and now it definitely can't. He can make more of the skill players he brings in than anybody else could, but offensive line and defensive depth will never be good enough to win anything beyond a division title every now and then, if that.

His results are impressive, but they aren't unique, and they don't justify keeping him around. A lot of money for new football facilities is riding on him remaining the coach, but boosters can be convinced all over again by any other 10-win coach.

Arkansas wants to win? There are other $3.5 million-a-year coaches who can win the Cotton Bowl every few seasons without employing mistresses. Kirby Smart's leaving Alabama at some point.

Arkansas needs Petrino's talent to make up for its recruiting disadvantages? Tennessee has it even harder geographically. If the Hogs are set on working without shame, they might as well go see what national champion Phil Fulmer's up to.

Arkansas wants to put up points? Gus Malzahn can do that anywhere, and the only knock against his character is that his wife is too fun at church gatherings. A plus, if you ask me.

Keeping Bobby Petrino would feel like the big-boy SEC power move, like Arkansas has finally graduated to Alabama's level. But to be worth it, he'd have to be more than just a good head coach and a genius offensive coordinator.

No coach is a saint. But most confine their major misdeeds to either their professional lives or personal lives, either screwing over their athletic directors or being terrible family men. Few do both. Those who do both had better win national titles. They'd better have great offenses and great defenses and win top talent.

Arkansas shouldn't let two good seasons scare it into hanging onto a one-trick coach whose reputation was shit before he lied to his university about his state-funded affair. If Bobby Petrino is bigger than your program, then your program is nothing but a line on a resume after all.