EA Sports held a webcast on NCAA Football 13 on Monday, overshadowed as it may have been by Mike Leach taking questions at Reddit. While the new trailer teases recruit scouting and other new features, the reveal focused largely on dynasty and online dynasty presentation stuff, including a new ticker that will reveal live scores from other games going on around the "country," along with previews and break-ins from a "studio" on upset alerts and games that affect your team, all hosted by the voice of Rece Davis: 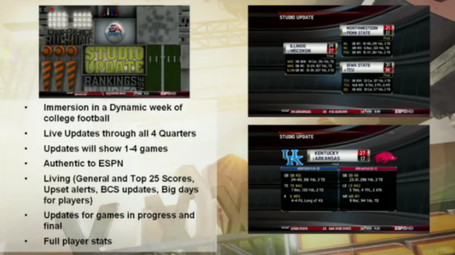 The panel talked up how natural it all sounds and how much it adds to the whole deal, all down to the way Davis pronounces "Michigan." They played a couple clips, with Davis previewing Oklahoma-Oklahoma State and reporting an upset score. It's pretty cool, but it was wise of the gents in charge to note that Davis won't just repeat the same lines every time OU and OSU play.

After game updates from the studio, Nessler will comment on what this means for your team in particular, whether it's about BCS rankings or conference standings or a future opponent, all while your game is being played. A team of Davis, Kirk Herbstreit and Brad Nessler would be about as good as it gets in real life, but how it actually works in the game is the key. So far, seems neat.