Bob Davie was the right man for the New Mexico job, both because a) while his ceiling is possibly pretty low, his floor might be relatively high, and b) he wanted the job. He has his work cut out for him, however, in improving what was, in 2011, the worst FBS team of the past seven seasons. Related: New Mexico's complete 2012 statistical profile, including projected starters, year-to-year trends, and rankings galore. Follow @SBNationCFB

On Dec. 22, 2007, New Mexico thoroughly confused and discouraged young quarterback Colin Kaepernick and whipped Nevada, 23-0, in the New Mexico Bowl. It was the Lobos' fifth bowl bid in six years, their first bowl win since 1961, and their 49th win (to 38 losses) since the start of 2001. It furthered what had become New Mexico's most successful, sustained run since the 1960s, and possibly ever. The Lobos were averaging seven wins per season, confusing opponents with Rocky Long's 3-3-5 defense and putting just enough offensive talent (Hank Baskett, Rodney Ferguson, Donovan Porterie) on the field to succeed.

Long's tenure began to fall apart in 2008 as the Lobos went 1-3 in one-possession games on their way to a 4-8 record. Long shocked everyone by resigning at the end of the season, saying "I want this program to be on top. I wanted it be on top as a player. I wanted it be on top as an assistant coach. And I wanted it to be on top as the head coach. I don't see it happening with me as the head coach." He took a slight jab at the school's casual fanbase ("If you want to compete with the big boys, you've got to act like it."), then headed west to become Brady Hoke's defensive coordinator at San Diego State.

Either Long left the cupboard bare or was working a magic act in Albuquerque. (Or, technically, both.) Because from the moment he left town, UNM has gone 3-33. His replacement, fiery Mike Locksley (Ron Zook's offensive coordinator and recruiter extraordinaire at Illinois), became known as much for punching an assistant coach as anything he accomplished on the field. He went a rather incredible 2-26 as the Lobos' head man and was dismissed following an 0-4 start last season.

So you've fallen apart, disappeared completely. You are no longer even the best program in your own state. You probably cannot find a hot, young assistant willing to mar his resume by trying to restore what has become a flaming pile of wreckage. Where do you turn?

Why, you turn to Bob Davie, of course. Davie's last game as Notre Dame's head coach took place on December 1, 2001 -- he spent the last ten seasons as part of ESPN's football crew -- and he jumped at the chance to build a program from scratch. His resume is what it is, and while quite a few college football fans were happy to get him out of the television booth, his disciplined, pragmatic (if less than flashy) style may be exactly what is needed to at least get New Mexico back on a competent path. This was not the most high-upside of hires, but in Albuquerque you have to focus on a higher floor before you can focus on a higher ceiling.

(Then again, the last football coach to follow the coach-to-announcer-to-coach path with an extended break in the booth, John Mackovic, went 10-18 at Arizona in his return and was run out of town via player mutiny. But still. Beggars can't be choosers.)

Here's what I said about New Mexico last July:

I always say that a new coach deserves at least three years on the job to establish himself and his bona fides, and clearly New Mexico Athletic Director Paul Krebs agrees. But let's just say that if Locksley had been removed from his duties after just two seasons, 22 losses and one fight with an assistant (and subsequent suspension), I wouldn't be tut-tutting the decision too much. […]

So how has New Mexico disappeared completely? How have they gone from a program with solid athleticism and a confounding 3-3-5 defense to a team praying that some transfers can lead the way to multiple wins in a single season for the first time since 2008? I always find myself looking for optimism with the teams I write about in this series, and I'm really struggling to do so. This is Washington State-esque, careening-off-a-cliff territory here, and I'm sure how you pull out of such a tailspin.

If there's any sort of encouragement to be found here, it's that Washington State improved at least a bit in 2010 after bottoming out in 2008-09. And really, it's not out of the realm of possibility that the offense might at least stay the same while the defense improves a bit.

Actually, there's another piece of encouragement: the schedule. Four of the most beatable teams on the slate come to Albuquerque: Sam Houston State, New Mexico State, Colorado State and UNLV. Win those four games, and you've doubled your two-year win total. Though that might not be enough to make Lobo fans believe the program is back on track, it would certainly represent tangible improvement.

October 1: New Mexico State 42, New Mexico 28. The Aggies were not good last year, but they were still rather easily the best team in the state.

Of the four "most beatable" teams on UNM's schedule, three won in Albuquerque. Only a 21-14 win over UNLV kept the Lobos from going winless (hey, Locksley and company deserve credit for never going 0-12, I guess). Average score of the other eight games: Opponent 48, New Mexico 5.

If there's one thing we learned from Bob Davie's time in the announcer booth, it's that he really isn't a fan of many recent offensive innovations. Depending on your mood, it was either incredibly entertaining or incredibly annoying listening to him giving color commentary for a game involving two spread teams. Give him some beefy linemen, smaller splits and a fullback, and he's happy.

Meanwhile, what do we know about Davie's new offensive coordinator, Bob DeBesse? Well, the Texas State alum led a run-first, spread-esque Sam Houston State offense with aplomb in 2011, helping the Bearkats to the FCS title game and averaging 256 rushing yards per game, sixth in FCS.

As we see below, DeBessee was quite fond of the pistol in Hunstville. 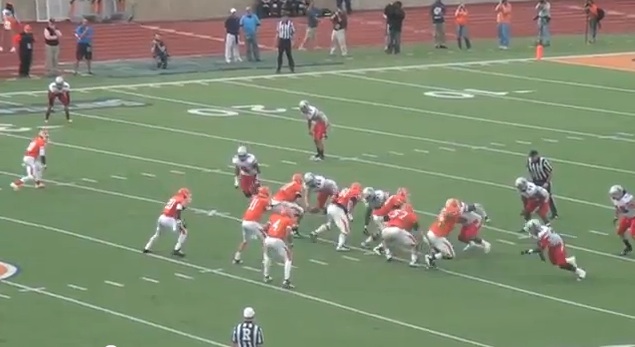 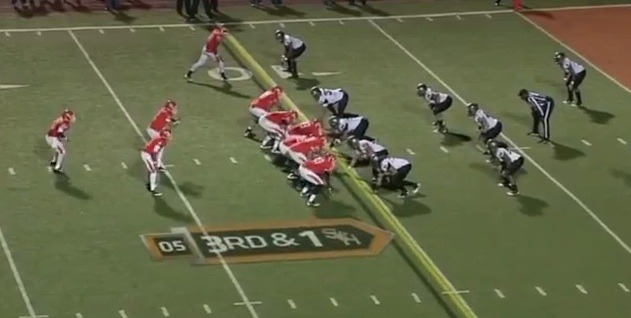 His option-heavy attack racked up 547 yards against New Mexico last September, and it apparently made an impression on Davie in the process. Early signs are that returning quarterback B.R. Holbrook's run-pass abilities thrust him to the front of the depth chart; this was further confirmed when pro-style (which is always a more polite way of saying "immobile") quarterback Dustin Walton transferred to Texas Tech.

So New Mexico is going to run the ball. Holbrook is a year further removed from 2010 knee surgery and should handle the pivot of the attack reasonably well. The questions start everywhere else. It appears the primary running backs will be shifty junior Demarcus Rogers (UNM's No. 2 rusher last year) and little-used junior Kasey Carrier. The duo looked good this spring, but let's just say that, as it pertains to Carrier, I cannot set my expectations too high on someone when he wasn't able to crack the rotation last year. New Mexico ranked 119th in Rushing S&P+, so if he wasn't better than the options available then, I won't expect too much from him now.

The runners will have a rather experienced line -- six returnees with starting experience, 68 career starts -- blocking for them, so there's that. I do expect improvement here, but not an infinite amount.

In ranking a whopping 113th in Passing S&P+, the passing game qualified as the offense's relative strength in 2011. We'll see how much (and how) DeBesse elects to throw the ball this fall, but in senior Ty Kirk, tight end Lucas Reed, and former three-star (sophomores Donnie Duncan and Daniel Adams) and four-star (senior Lamaar Thomas) recruits, there is some upside here. Kirk and since-departed Deon Long were the only receivers to average better than even 4.7 adjusted yards per target, so we once again won't set the bar too high here, but it isn't unreasonable to expect both the running and passing games to improve to around 100th each. While still poor, that would represent marked improvement.

Once upon a time, Bob Davie was one of the preeminent defensive coaches in America. His Wrecking Crew defense at Texas A&M was one of the most consistently outstanding units in the country in the early-1990s, and he brought similar proficiency to South Bend when he took over as Lou Holtz's defensive coordinator in 1994. His mediocre head coaching record at Notre Dame (a record that has begun to look better and better through the years, as his replacements failed to do any better) and his long television career have changed what he is known for, but the odds are pretty good that he still has some defensive chops.

At least, New Mexico hopes he does. He and coordinator Jeff Mills (the defensive coordinator at Davie's alma mater, Youngstown State, before an less-than-distinguished pair of seasons as Washington's defensive backs coach) inherit a defense that was truly dreadful in 2011. Like the offense, the defense ranked in the triple digits in just about every advanced statistical category (their best ranking: 94th in Third Quarter S&P+ … congrats!).

In 2012, New Mexico will be moving to the 3-4 defense upon which Davie built his name, and honestly, that might suit the personnel well. Undersized end Joseph Harris (who, with his four tackles for loss and four forced fumbles, is easily one of the Lobos' best two or three returning playmakers) now becomes a perfectly-sized outside linebacker, and former star recruits Reggie Ellis (once a four-star signee) and Rod Davis (three stars) should team with 250-pound end Jake Carr and 280-pounder Ugo Uzodinma to form a solid rotation up front. Mills will be leaning on Harris for playmaking at the linebacker position, as there is very little proven depth there otherwise.

Meanwhile, a secondary that was pretty poor in 2011 is at least relatively experienced. Senior corners Destry Barry (four tackles for loss and five passes broken up last year) and DeShawn Mills (two and three, respectively, in 2010) should form a decent pair of corners (they were pressured on the depth chart by rising sophomores Devonta Tabannah and Tim Foley), and three-star sophomores Jamal Merritt and Zoey Williams should be ready to join the rotation this fall.

The transition was a bit slow this fall, which isn't incredibly encouraging. But hey, things almost literally cannot get any worse.

When you've won three games in three years, the bar is going to be set awfully low. But if Davie can engineer even minor improvement this fall, there are some winnable games on the docket. Texas Southern, Texas State and Wyoming come to Albuquerque, while trips to New Mexico State, UNLV and Colorado State are far from intimidating. Still, set the bar at two wins and allow yourself to be pleasantly surprised by anything beyond that.

Bob Davie had to know he was walking into a dire situation, but it appeared that even he was a bit surprised by what he found this spring. Al Golden proved that you can engineer a turnaround within three or four years, but it will take at least a couple of autumns for Davie to establish any sort of groundwork here. As I mentioned at the top, Davie was far from a wonderfully high-upside hire, but he could certainly serve a role as a fixer -- clean up the mess left behind by Locksley, build back depth and fan interest, and set the table for another coach to succeed.

New Mexico needs what Davie has to offer -- discipline, physical play, etc. -- and in a few years the Lobos will probably need something different.