A Perfect Quarterback For An Imperfect Time

Is USC going to make a run at a national title, even with a roster depleted by NCAA sanctions? If nothing else, they've got the right quarterback for the job. Of course they do. They always do. Follow @SBNationCFB

Share All sharing options for: A Perfect Quarterback For An Imperfect Time 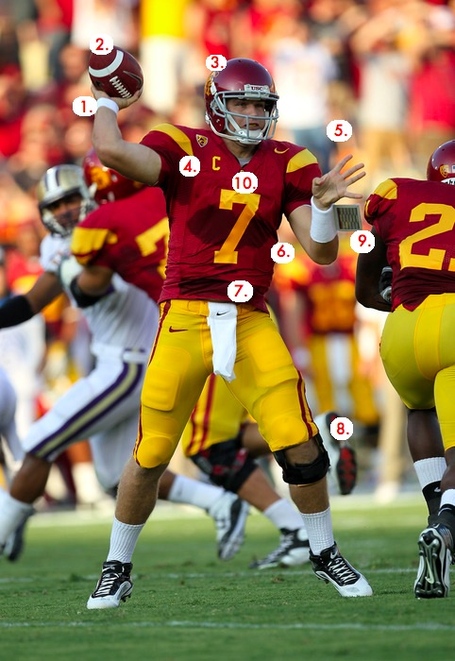 1.) Matt Barkley is the kind of quarterback who wears wristbands, and headbands, and anything else directly from the Jim McMahon Locker of Retro Football Goods. When considering USC's starting quarterback, this matters with reason.

Style points only go so far to explain Barkley's 1988 flavor, however. The recent history of college football does the rest: in an age of dual-threat quarterbacks, the spread offense, and Air Raid quarterbacks who resemble human fungo machines more than old drop-back signal-callers, Barkley and the USC offense represent something of a throwback.

No, Matt Barkley will not be running a speed option on hot read, and no, he will not be throwing the ball 50 times a game. He will take the ball as Bill Walsh's football Jesus intended, from under the sweaty hindquarters of the center, and with an eye on the defense the entire time. Barkley's m.o. is always a bit simpler than that: Barkley will then hand it off, or perhaps throw it. It's what quarterbacks did in the VHS era if they weren't option scramblers, and they usually did it with the fringe of a beachy half-mullet bobbing from just under the helmet.

He threw 39 touchdowns last year to only seven interceptions, and completed 69 percent of his passes on the way to 3,500 yards passing. Throwing seems to be working well enough for him and USC. As long as 2012 continues this trend, he can wear as many headbands, wristbands, midriff jerseys and neck rolls as he likes, fashion be damned. (Go ahead and take the two-bar facemask, while you're at it.)

2.) Being a bit of throwback is not limited to the gear for Barkley. He's a throwback in his mannerisms, patting the ball like every 10-year-old backyard gunslinger eyeing a button hook opening up against coverage between his dad and the boundary defender. (The boundary defender in backyard football is usually a tree, or perhaps a dog doing a very sloppy job at playing free safety.)

He's also the starting quarterback at USC, a kind of throwback position not only because of the offense they've run there for over 10 years now, but also because quarterback at USC is its own variety of unchanging brand. There are plenty of these in college football. A short list:

A USC quarterback, in the ideal, stands somewhere between prom king and patrician super hero. They're always good-looking drop-back passers whose idea of a quarterback running play is hustling to the sidelines after the punt team comes out. They come shrink-wrapped for the NFL media, trained to say nothing of interest whatsoever, but to do so with a smile and the confidence of someone who's been the starter since Pop Warner. They probably went to Mater Dei, just like Leinart and Barkley did, or to some other school that cranks out Captain America-type quarterbacks with frightening regularity.

Barkley throws over the top on three- and five-step drops, can hit a streaking receiver 40 yards downfield in stride off play-action, is blond, laid-back, comfortable using the word "bro" casually, and was seemingly built to play the position. He probably had a USC scholarship offer from birth, really. (And if Lane Kiffin had his way, he would have.)

3.) In other words: he's a classically USC quarterback dropping back and wearing the red and gold, a constant in a game with fewer and fewer constants.

4.) Barkley is also a team captain coming back for his fourth year as a starter. Experience as an asset cannot possibly be overrated in college football in general, but with USC specifically experience means so much more given the program's recent history. Barkley came in and started as a freshman in the chaos of Pete Carroll's final year, worked through Lane Kiffin's first year--including the announcement of sanctions and a late season leg injury--and finally enjoyed a relatively normal and well-deserved 2011 season. Barkley's been a positive constant through all this, something USC fans should remember well past whatever the 2012 season may hold for them.

5.) Just pointing out that Barkley does another piece of classic backyard quarterback mime: the wrist-flick and follow through with the non-throwing hand. He is your all-time quarterback, and is drawing up the plays on the palm of his hand as we speak.

6.) The chink in his armor: a tendency to bloat. Every superhero has a weakness. Carson Palmer's was male pattern baldness, Mark Sanchez's was Oregon State, and Matt Leinart's was... well, a few things in his case, actually. (We'll call him the Tony Stark of the group.) Barkley's leaned out as he's matured, so now he's basically perfect except for "only being 6'2"-ish." I'm saying this as a joke, but watch an NFL scout say it with a straight face this coming fall.

7.) Of course he has a sweat towel. (See: retro-ass football player.)

8.) And of course he has a knee brace. (See: drop-back passers and rolled knees, usually resulting from someone throwing a 300-pound lineman into them at high speed. Football is a horrible and fascinating game.)

9.) The part where we say nice things about Lane Kiffin, the mature, measured, and level-headed Lane Kiffin of 2012, and not the doofus vagabond prince who ran to USC from Tennessee with the torches of a mob flickering behind him. Barkley's production is due to talent, sure: he throws to coverage-destroying Robert Woods and Marqise Lee, two wideouts capable of snapping the bumpers off a defense on any play.

Design is an essential part of this monster, however. Kiffin has done a brilliant job in adapting the classics of the USC Chow/Kiffin/Sarkisian playbook to Barkley's strengths, and in bringing in a steady stream of talent to keep Barkley upright and Woods working in single coverage thanks to all the other threats the Trojans offer. All the little jerk routes are still there, the rollouts, the fades, slants, and the biggest proof Lane Kiffin is a loyal video gamer, the fullback wheel route of the backfield.*

*The dickest of moves, and open every time.

It's a ballsy offense in its best moments, relying on one-on-one matchups and balance through the run game to give defenses vertigo. And when things get truly hairy, Barkley and Woods play catch and dare you to defend it. On that fade route to the corner of the endzone, it's both criminally unfair and beautiful all at once.

10.) Barkley wears seven, which is coincidentally the number of years since USC appeared in a national title game. There's a kind of expiration date to everything in college football. The produce lasts four or five years at best, everything is run against a short clock of eligibility, and success for programs can turn to utter squalor in a matter of a few months. (Hi, Florida and Texas 2010-2012; hello, Penn State 2012.)

USC will be picked in the top five by most to begin 2012, and like most preseason polls, something about this will probably be completely wrong. USC has to hack their way through an unpredictable Pac-12, including tough road games at Utah, Stanford, and Washington. Strapped for personnel by sanctions, they cannot afford injuries in a way few other teams can afford the usual roster attrition of a full football season. They need votes in the polls, luck, and for sportswriters on the East Coast to learn to use their DVRs and watch USC games with their morning coffee.

If they don't get those kind of breaks, it would be nice to take a moment to appreciate the steady head that lead USC through what could have been the total demolition of the USC football program, even if those things -- the Heisman, the national title, the Pac-12 championship -- slip away in a moment's inattention as things tend to do. Generic superhero casting doesn't always get it right, but in Barkley's case the tights and boots fit brilliantly.

If they do win the Pac-12 championship game, and get the nod from the BCS' penultimate championship, then they get a shot at the title. For Barkley it will have been four weird years in the making, and it will happen on a happily coincidental date: the seventh day of January 2013, on the same field in Miami, Florida where Matt Leinart and the Trojans won their last title by a score of 55-19 over the Oklahoma Sooners.