Betting money on college football games is the surest path to success there is, once you know how to crack the Vegas code. Good news! It's really easy. Follow @SBNationCFB

Share All sharing options for: How To Become The Richest Man In The World By Gambling On College Football

Gambling is easy, especially sports gambling. That's why the men who gamble on sports are our nation's richest men, and yet walk among us like normal people. He might be sitting in the cubicle next to you, just making billions every day with hot sports bets while you wait for the IT staff to update your stupid ol' Microsoft Outlook! The richest man in the world: Steve Caulfield of Spokane, WA.

Sports betting is so easy because Las Vegas makes it easy. They want you to have money, so much so that they give you clues on how to bet on sporting events. These numbers are called lines, because if you get in them and wait long enough, you'll find a smiling face on the end waiting to give you COLD HARD AMERICAN CASH!

These lines are based on science, put together by the finest minds society has to offer. But we don't want you to just trust the diplomas hanging on the walls. We want you to see the math that makes Las Vegas poorer every year, and your cubicle mate, the richest man in the world, so much richer by the day while you ignore the free cash you can almost hear flowing into his pockets.

For instance, take these lines from the first two weeks of college football. Know the code, and wear pants of gold, my friend!

Las Vegas clearly wants you to believe Michigan State's football performance can not only be quantified, but predicted. This violates all three laws of thermodynamics, several cornerstones of string theory, and the Big Ten charter. Vegas is screaming at you: BOISE TO COVER.

Another way Vegas wants you to take their money. See, "12" here clearly refers to the 1992 National Title, one of fourteen claimed by the Crimson Tide. That game took place where? New Orleans, where the Tide beat the Miami Hurricanes 34-13 on the turf of the Superdome. The last team to win a college football game in the Superdome? That's right, the Michigan Wolverines, current champions of the building. The Tide won't stand for that, and easily cover to claim the belt back from them. Which belt? The one we just made up, hater.

(Fear not for your dignity: a Michigan man without his belt won't see his trousers fall, as he always wears a spare. And suspenders.)

Two points always means one thing in the Vegas lexicon: bet on the team with the superior sideline outhouses. In this case, the answer is clear. 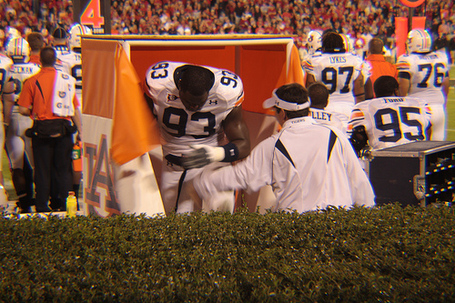 A surefire pick to leave you yelling War Cash Eagle! Without irony or winking! No really!

Easier than most since you can't score half-points in football, stupid! This is a joke that means you should put your money on Navy, guaranteed, and with zero risk of failure.

To the novice, this might mean "Pick 'em," or "buddy, you're on your own because this one here's got us more confused than a passel of possums flyin' a spaceship!" This is one of Vegas' greatest non-tricks, because this means Vegas is picking Texas A&M by any number of points you want. The yield on these bets? MYSTERY CASH. Just give them some money, and there's no telling how much you'll get back! It's unpredictable, but exciting!

(There is also the possibility this means every play in the game will be an interception. In this case, place no bets.)

This presents no actual information about the game, but if you don't know West Virginia's going to murder Marshall by three touchdowns before you start decoding Vegas lines, then perhaps sports gambling isn't for you no matter how easy it may be. (Please don't drive airboats drunk, no matter how cool that really would be.)

Vegas lines involving Iowa always list the exact number of points Iowa will score on that day behind the team. This line clearly means Iowa will win 5-4, because they are Iowa and are capable of doing amazing things with just five one-point safeties off blocked extra points. (All courtesy of Tim "Verti-bro" Hanley, walk-on special teamer with a nine-foot wingspan and a severe case of vertigo.)

Lucky sevens! In any game where Kansas State is favored by a touchdown or more over a fellow BCS team, bet on the other team to cover. Bill Snyder is is a gentleman, and keeps his victories and his losses over his peers at respectable margins. Afterwards, they often exchange freshly-baked cookies.

Like any good man of the Edwardian age, though, he beats his servants savagely behind closed doors. Thus bet on K-State to cover against any non-BCS opponent at any number, and for Snyder to also personally bust out the windows on their bus with his favorite crowbar, Obelix the Unpolishable.

Again, imaginary football numbers are code that you should bet on the other side, but this is a dual message that this game will be played not in Tucson, but instead moved to T. Boone PIckens' Rancho Sangre, a hellish fortress of football and burning oil fields located 9,500 feet high in the Rocky Mountains. Arizona in year one rebuilding under Rich Rod will be hard to watch, but watching Drake fight for his life against hungry animals at halftime will be more than worth the pain of viewing the actual game. A clear cover line for Oklahoma State.

This means UCLA's quarterbacks will all tear their ACLs in this game. Not because of the number, but because this is UCLA football.