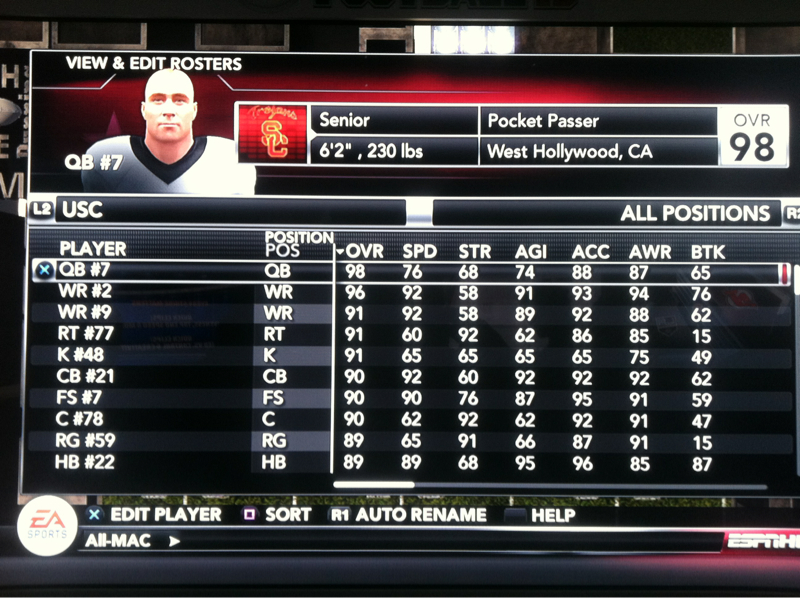 Tradition Sports Online has a nice collection of player rating screens from NCAA Football 13, with players like Not Matt Barkley, Not Montee Ball, Not Landry Jones and Not Manti Te'o among the highest-rated so far. None are rated 99, presumably leaving room for this year's Heisman unlockables like Barry Sanders, Robert Griffin III and such to take the highest ratings. All of this makes sense.

It's when we get into the reported team ratings that things start to puzzle.

Also via Tradition Sports Online (with fancy HTML via Land-Grant Holy Land) an unofficial list of each team's general ratings:

USC has the top offense, Texas has the best defense, and Oregon and LSU join both among the top five teams. Not unreasonable.

However, you're probably seeing a number of head-scratchers in there. West Virginia an 87, but Clemson a 97 -- and Clemson's defense rated the same as WVU's offense? LSU's defense (No. 2 in yards per play) rated the same as Oregon's (No. 35) and Wisconsin's (No. 44), which scored 83 points against each other? Wisconsin a 99 in general, even though the Badgers lost three games with Russell Wilson? Boise State gets better recruiting and coaching salary resources (since that's what the "Prestige" rating essentially equates to) than Georgia and Penn State? As for Tulsa ... that's fine. Let's let that one stand.

These ratings aren't final or even official, so there's still time to hope many of these oddities go away before the game's release. Follow @traditionsports for more as the release date nears, I reckon. Or we can all get really fired up about reported video game Prestige rankings a month before said video game comes out.