On Tyler Hunter, Lil Boosie, And The Peril Of Playing Gotcha With Twitter

Share All sharing options for: On Tyler Hunter, Lil Boosie, And The Peril Of Playing Gotcha With Twitter

Tyler Hunter's indiscretion on Twitter earlier this month likely cost the Seminoles sophomore his Twitter account and a few laps around the Florida State campus. But the defensive back was put on the defensive by an overzealous need to control the free speech of athletes, and that ain't right.

Hunter's tweets that have and will make the rounds on the Internet — which, fair warning, include a racial slur — are no longer attached to his Twitter account, nor is his Twitter account active. But Throw The Flag archived them: 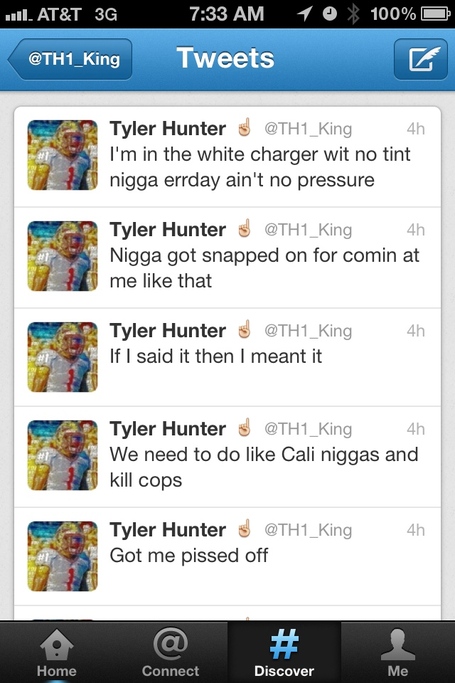 On the surface, that looks really bad! Hunter tweeting about killing police officers is not a good look! But, of course, it ain't that simple.

First of all, this was part of a longer string of tweets in which Hunter lamented being forced out of his car for a couple of routine traffic infractions. 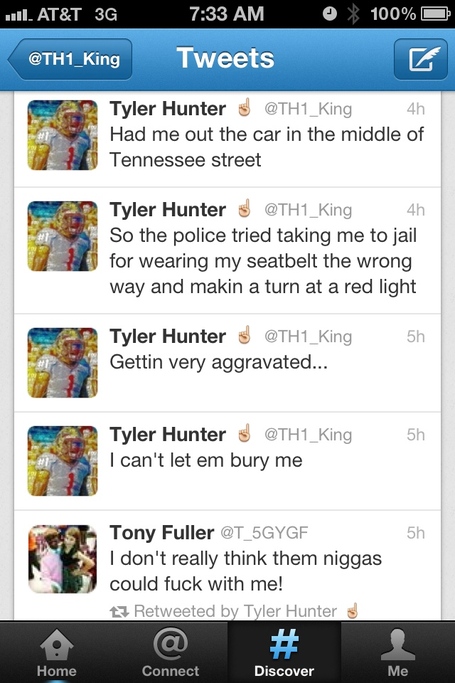 Second, the offending line about killing cops? It's a Lil Boosie lyric, from "F--k The Police." (You can hear the verse here — it's the second bar — but, uh, don't click that link in a place where you can't listen to a rapper's uncensored complaints about the police.) Hunter was probably peeved about what he perceived as police harassment, which, it should be noted, is definitely possible, though this is probably not the forum for discussing how a young black man might be treated by cops in Tallahassee. But he wasn't necessarily personally agitating for killing cops as much as he was sympathizing with a rapper saying a thing on a song, despite the "If I said it then I meant it" follow-up.

There's a bit of irony in Hunter choosing a Boosie lyric, of all the bars in rap history expressing displeasure with officers of the law: The rapper's fans (some of whom, it can be safely assumed, are college football players) likely know the custom and peril of treating a rapper's words as statements of fact from his own murder trial, where prosecutors tried to use his words on wax to paint him as a stone-hearted killer. That didn't work in court, and Boosie was found not guilty of that charge (he remains in federal prison in Louisiana for convictions on drug charges), but the idea that figurative speech in music could theoretically be used in court is worrisome.

There are two ideas at play here, though. One is that bloggers and writers can miss things by not knowing context or failing to do due diligence that might resemble journalism. Those who aren't familiar with rap might not realize athletes are using lyrics on Twitter: Tyrann Mathieu's rant, for example, was peppered with references to Pusha T's "Exodus 23:1" — and that song, a diss possibly aimed at Drake and Lil Wayne which elicited a response from Weezy, had already confounded some folks. Understanding all possible contexts is understandably difficult, but the rush to get a post up before someone else playing "Gotcha" does makes understanding them on the fly even harder.

The other idea is that, much as artists will sometimes be made to answer for their lyrics, athletes (and you can extend this to public figures) must be eternally vigilant when using social media as a sort of public diary, because everything can be saved on the Internet, and the slightest slip-up gives a blog a reason to run a salacious headline.

To the credit of the proprietor of Throw The Flag (who, disclosure, is a frequent Internet correspondent of the author), he noted that Hunter apologized and pointed out that he tweeted lyrics; that won't stop outlets like the Daily Dot from writing about the situation without recognizing the context, nor will it prevent fans from bringing up the topic without knowing the whole story.

Hunter's probably always going to be known as "that FSU guy who tweeted about killing cops," not "that FSU guy who was frustrated with cops after possible harassment and stupidly posted a Boosie lyric about killing cops," because a story getting posted is just like a tweet getting tweeted: Both ring bells, and there are no bells that can be unrung in our digital era.

There are obviously cases in which a public figure's Twitter use warrants a juicy headline: For his contributions to that field, we may as well call that the Will Hill Rule. But maybe there should be a Tyler Hunter Corollary: If public figures are subject to having every statement scrutinized, those statements should at least be scrutinized well.