This year's SEC media days opened with familiar claustrophobia, new neighbors to meet and a wellspring of hope for the glory days ahead. Spencer Hall got bored and doodled, mostly.

There's an official position at the National Geographic Society for "explorer-in-residence." The current job-holder is a 72-year-old woman who will be spending two weeks in an underwater research station, and she sounds ecstatic about the opportunity to live without sun, fresh air or Internet for two weeks.

The bargain version of this experience -- without the troublesome pressurization, the risk of the bends or the danger of a sudden rupture killing you and all your friends all at once -- is SEC media days. The Wynfrey Hotel is the BioDome, the self-contained best idea of some time around 30 years ago, a mirrored slab of generic hotel spiked into one end of a mall. From above, at the right angle, it looks like a melting monolith left in the middle of a slab-gray pool of asphalt, an iceberg crazily out of balance and teetering to one side. It is marooned in a lagoon of parking lots; the lagoon, for this week, is choked with cars at one end, all cramming their way into SEC media days.

Explorer-in-residence is one far more glamorous way to think of what you actually end up doing at SEC media days: eating the free Golden Flake potato chips in the lobby (preferably the Sweet Heats, or possibly the underrated Cheese Curls), waiting on anodyne quotes from coaches who'd rather be stabbing themselves in the leg with hot irons than talk to 1,000 reporters at once (and it is 1,100 this year) and moving warily past the drifting clumps of fans waiting for autographs at the base of the elevators. (Not the Alabama fans. They will be here on Thursday. They will terrify everyone here.)

*After two days, if you stay at the hotel, a vertigo sets in, and they have to send armed security guards after you because you have likely tucked into a corner, huddled there, and are pleading with hotel officials for a fresh supply of cedar shavings and food pellets.

There are new things to see, though, in the sea of claustrophobic familiar sights. Tiny, elfin gangster Mike Slive isn't one, but it's fun to watch him revel in the attention anyway, and then realize in turn that the most ostentatiously successful conference in college football is run by a man who would play "Apothecary #2" in a stock Western.

Mike Slive quoted Winston Churchill, Shakespeare and Muhammad Ali in his opening speech, thus sadly neglecting classic modern poets Bun B and Nelly. Both would be fine nods to the new member-states of his conference, but as a lawyer, Slive is married to prose and the law, not verse. I understand that, and forgive him for it. 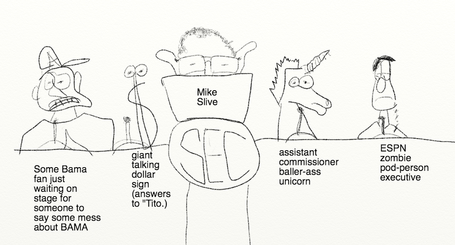 Slive also somehow managed to mention the SEC's tripling of revenues under his watch while simultaneously saying the phrase "student-athlete" and academics. He then mentioned the "Project X" alluded to by SEC officials earlier this year, something he confirmed as an "SEC Network" in development. The "Project X" will now be referred to by the extremely creative title "Project SEC," and the people running this sport are not creative in the least. Mike Slive's dog "Dog" waits for him at home -- at his large, well-constructed and very expensive Birmingham home.

The new relations tested well, if only because both came with respectful middle fingers extended at the media. Kevin Sumlin was all pleasant bromides -- excitement, execution, speed and great traditions of Texas A&M -- but not without an underlying attitude that yes, playing in the SEC is hard, but A&M had in fact played football before, and also that the next person to rephrase the question "Why don't you just curl up into a ball and die now, new member?" would get a sharpened cliche thrown clean through their jowly reporter-y neck.

I like Kevin Sumlin a lot after watching this process in action. I hope he gets asked this question again in November, preferably when he is holding an axe in his hands after a 21-point loss to an SEC West team on the road. I also hope he brings it up if/when Texas A&M ruins someone's season with one of those stunning moonshot November games that creeps up on a good team a quart low on focus and a quart over their proper confidence levels going in against an underdog. Both will be bloody and spectacular occasions.

Gary Pinkel is a human blank. This is entirely by design, I'm sure. Pinkel made many of the same points Sumlin made -- changing nothing, having played football before, and not prepared to break into tears at the awesome thought of playing KENTUCKY in KENTUCKY -- but has the patterned verbal camouflage of someone who's been a coach for 20 years and would like to just keep on being a coach in the most unobtrusive way possible. I remember nothing about what he said, and spent much of the time staring at his truly huge forehead. 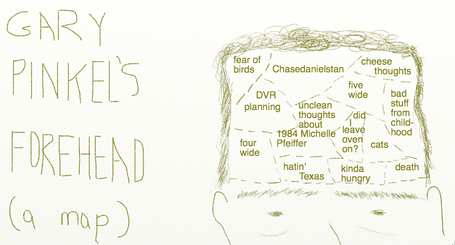 Steve Spurrier doesn't do media day so much as he saunters through it, slaps a few backs and then performs the daring act of simply being himself for 10 to 15 minutes of uninterrupted, twangy Spurrierness. He verbally backslaps reporters in the crowd he knows by name, he jokes point-blank about Ole Miss being horrible (he is undefeated against them lifetime, so it is a mean but factual point) and then brags about getting a new knee and feeling better than he's ever felt about anything, especially since he's all too happy to delegate. I and the rest of the world assume this means "play 18 holes of golf," and there's nothing wrong with it if you can win 10 games and get away with it.*

*Which he can, and has somehow done at one of the SEC's most legendary coaching deathtraps, South Carolina.

This is a literal picture of Spurrier at media days, every year, for the rest of time. 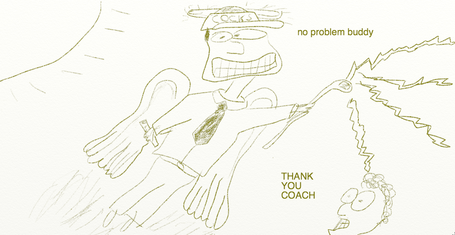 James Franklin spoke last, but I had to move. The vertigo had crept in, and I had to get some air. This was made easier since I know James Franklin's tack on media days: to be so balls-rattlingly confident, so absolutely certain of every superlative he gives his employer, that half the room leaves convinced that their sons will play James Franklin football at Vanderbilt. That sportswriters would assume their genes could make it to D-II is funny, but assuming a Vanderbilt future for their slow-footed progeny is even funnier because [SAD BIOLOGICAL FACTS GO HERE.]

There was an A&M kid at the bottom of the escalators, waiting with his dad for Kevin Sumlin, the new coach of Texas A&M. He and his father were wearing matching Aggie gear, and it was clear this was a thing, and that this would be a moment between father and son. The look on his face said that when Texas A&M won, his heart sang. When they lost, his nerves ran slower and the world fell into shadow. So much depended on this moment, and he was so much in the moment that it was hard not to be arrested by the intensity.*

*Unless you know Texas A&M fans. If you do, this is actually pretty normal, when you think about it.

He was, like, 10 years old, and waiting, and I thought that it was horrible because somewhere, sometime in the future, football would fall on his head so hard and with such horrendous force. He would cry, I thought. He would cry gusty, shuddering, embarrassing tears over a game. Then I remembered that he was old enough to remember the 2011 Texas A&M football team, and felt better for him. He'd survived worse, and the thing coming down the stairs was, at least for the next 50 days or so, hope dressed in a sport coat and tie.