HOOVER, Ala. -- The Muschampalanche started early. I missed the early stages of it because Birmingham is the American Johannesburg, a series of hills where well-off white people skirt through the city on interstates thrown over the homes of the black residents who live in the actual city. There are exactly two on-ramps to the interstate in those areas, and when you finally get on one the city of Birmingham distributes freshly hit dogs* to yelp for help on each. I am not saying Birmingham is a city of racist-ass interstates littered with dying dogs, but based on my sample size of one profanity-soaked drive into Hoover this morning, this is exactly what the city of Birmingham is. ROLL TIDE.

*We called the police. I assume the police will shoot the dog in the head to put it out of its misery. I base this on the policies of the Nashville Metro Police, who have shot truck-mauled deer in the head in public on roads located insanely close to downtown. Thanks for sharing that with the passing school bus full of children, Nashville po-po! 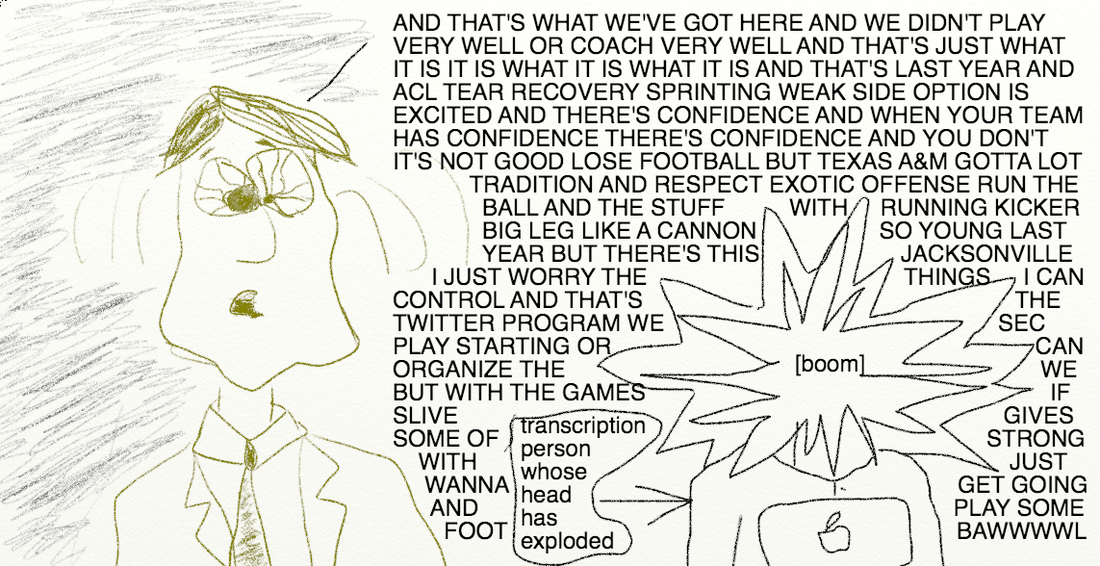 So by the time it started, Muschamp was at a full sprint. Florida's coach took five, or 11, or 32 minutes to finish his opening statement. Soviet agents during the Cold War communicated by microwave burst: short, high-frequency blasts of information crammed into a single blast of energy sent to satellites overhead. So does Will Muschamp, who included no fewer than 390 separate pieces of information unloaded in a torrent of sprint-rate verbiage.* The transcriber, dutifully typing away during every other coach's speech, simply gave up a few minutes in and had an assistant sweep her fingers off the floor for her. She would have died if she attempted to keep the pace, and clearly made the right decision.

*Almost all of it completely innocuous, save for two or three notes everyone immediately typed out simultaneously. The curious thing about sitting in a pool of hundreds of reporters, all hunched backs peering over glowing rectangles in a vast, softly lit ballroom, is that you form a kind of instant commentariat or Youtube audience, an instant focus group for whatever is spilling out of the coach's mouth. When Muschamp spoke about minutiae only Florida beat writers wanted, a kind of slow chatter of keyboards undercut the audio. When he was asked about moving the Cocktail Party from Jacksonville, Muschamp mentioned that Vince Dooley never had a problem with the location, and suddenly keyboards ticked and tacked away loudly. The plasticky rain of keyboards has to be disconcerting for the coaches: either they've said something really cool, or their Sports Information Director has just jumped headfirst off the railing in the mall. 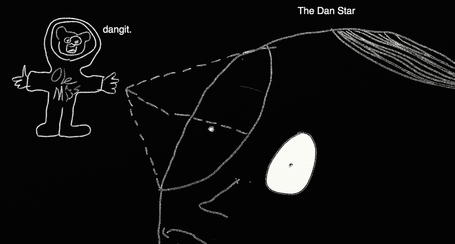 Dan Mullen's skull entered the room. Objects flew off the walls, caught in its gravitational pull. Coffee tilted in cups, small tides ebbing and flowing toward the grand orb perched on the Mississippi State coach's shoulders. Mullen's skull is huge, like plus-eight hat size huge, a helmet-breaking mother's-sorrow of a cranium, and at one point it said that the close losses to SEC West teams proved how close Mississippi State was to winning a national title.

The eye might leap to "Mississippi State close to a national title" when reading that, and now you are having a stroke. I apologize. Please just think about Dan Mullen's huge head, and how many Ole Miss homeworlds that Death Star of a head has obliterated in his three years at Mississippi State. 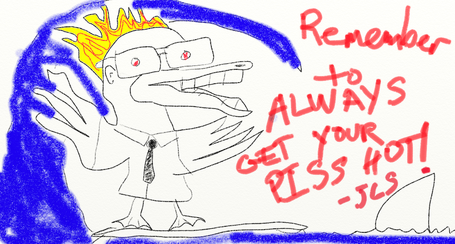 Human bullhorn, deranged cafeteria lady, irate fish and game warden, Gus Chiggins, and current Arkansas head coach: John L. Smith is all of these, and also a complete barking lunatic. I only have stunned field notes from his 15 minute freewheeling gymkhana ride around the English language. They have been deciphered as best as I can unscramble them from the feverish gibberish I wrote recording feverish gibberish:

John L. Smith is as crazy as a glove compartment full of wasps, coaching on a 10-month contract, is currently bankrupt, and is taking over a team left headless when their coach crashed a motorcycle laden with scandal and the very tall body of his mistress, who was not his wife, and whom he lied about to his boss before getting fired for a combination of all of the above. Some men are tinder waiting to be thrown into the right fireplace and then kindled with just the right spark, burning bright in the darkness of the universe to fuel the just the right fire at exactly the right time.

John L. Smith is not this man. He is instead an animated scarecrow loaded with bootleg fireworks tossed into a shed full of flammable talent, even more volatile politics, and, like, a shitload of M-80s and old, sweaty sticks of poorly packaged Chinese dynamite. The glow will be seen for miles when it all goes up, and when we all run to the site we might find the limp figures of decimated opponents, or the scorched foundations of Arkansas football itself. Either way no one in this room wants John L. Smith to go anywhere, ever, especially as long as he's barreling into press conferences like so many bulls through the streets of Pamplona. (He gored Joe Schad on the way out! It was awesome! They're totally bros now!)

Then it was lunchtime.