Madness is setting in at SEC Media Days, helped along by Gene Chizik and his utterly boring session.

The afternoon shift of SEC Media Days. Creeping, dazed madness has set in with a fierceness. 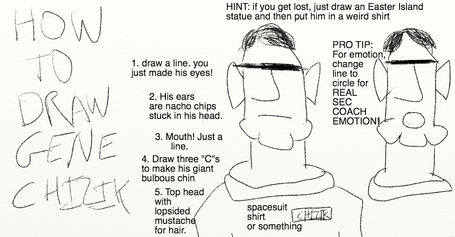 "Nah," i said confidently as thunder slammed into the Wynfrey and knocked a few glass panels out of the Galleria's roof. "That's totally not thunder," I muttered as a blustery freak summer storm blew through Birmingham. "It's probably just some really big laundry carts crashing in the hall, or maybe the airconditioning kicking on. That's TOTALLY what it is."

Maybe I am averse to admitting that this might be thunder since the last time I heard big crashing at an SEC media event the noise sounded like big laundry carts crashing through the halls. Tornadoes stumbling drunkenly through downtown Atlanta happen to sound a lot like the world's biggest laundry carts being thrown down a hallway, even if that hallway is Dekalb Avenue, and the things they happen hit are the Cotton Mill Lofts and the Georgia Dome.

There's a segue to "crashing bore Gene Chizik," but I prefer to look upon Gene Chizik's ability to open his mouth and spit ten to fifteen minutes of khaki pants with a bit more charity than simply saying he is boring. Chizik's ability to speak in perfectly formed blanks transcends mere boredom, and goes into something well beyond art. If Jim Tressel could be saluted for his senatorial gift for saying absolutely nothing, Chizik has to be applauded for a kind of dictatorial ability to hypnotize a crowd while using the maximum verbiage to achieve the minimum amount of information transfer.

I listened to him intently. I came to an hour and a half later, staring at the ceiling and wiping a trail of drool from my suit jacket. Give Gene Chizik epaulets, a balcony and a large paramilitary and Gene Chizik could have ruled a South American country in the 1970s with ease. This skill set, coincidentally, overlaps with many of the skills needed to be a successful football coach at Auburn University. (He is also, as the illustration shows, easy to draw. Those are his two emotions: awake, and open-mouthed.) 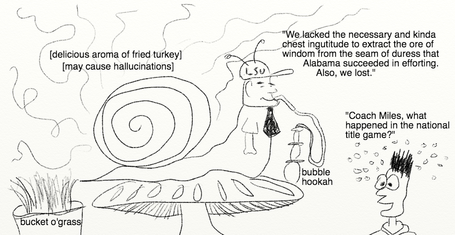 Proposed: The weirdest thing Les Miles could be in any given situation would be normal. Also proposed: Les Miles will be the weirdest thing in any given situation anywhere. Resolved: in order to be the weirdest thing at SEC Media Days, Les Miles would be normal. This is in fact exactly what happened, since Miles answered questions about the disastrous national title game (summary: "we lost!"), his video game commercial (summary: "It was fun!"), and his outlook for the coming season (shocking summary: "he's excited.") Les Miles was utterly normal, and this was bizarre, and perhaps we've all been indoors and under artificial light too long for our own good.

Nick Saban is first tomorrow. Be advised that all tardy reporters and radio people will be turned away at the door, or executed. (It really depends on his mood. ROLL TIDE.)