College Football Science: Where Your Team Ranks On The Fun/Skill Chart

In order to better understand college football's major conferences, we must plot each according to its Fun and its Skill. SPOILER: Alabama is both great and as fun as a gas leak. Follow @SBNationCFB

Share All sharing options for: College Football Science: Where Your Team Ranks On The Fun/Skill Chart

Debating conference strength in football is a lot like using a key party to evaluate someone's sexual prowess. After a season of scrimmaging against the usual contractually obligated competition, college football teams place their hands in a bowl, fumble for a moment, and then pick an opponent with one eye firmly squinted open. Then everyone goes upstairs, competes awkwardly, and comes away confused by the whole experience.*

*This is especially true for the team that pulled West Virginia's key. Ashamed and yet satisfied beyond all reason. (Also: Holgo).

Our principal point here is that one embraces certainty at their own risk. Our secondary point is that your grandparents played some parlor games you would rather not know about, but mostly the first thing.

The only real honesty in college football is embracing subjectivity. People generally like conferences for the stupidest and most durable reason: because their team is in this conference, and therefore this conference must be superb in every way.

No one can take this away from you, college football fan, not even when this conference is yes, very good, but also dominated by a stultifying, asphyxiating brand of play landing somewhere between "Italian soccer" and "dutch oven given with the covers pinned over your shrieking head." This is you, SEC, and the angry man holding the covers over the head of the conference is Nick Saban. Please eat less cabbage, Nick Saban. The rest of the conference would appreciate that ever so much.

The two things that make a congregation of teams in any sport worth watching are the general possibility for entertainment when said teams are on the field and the general level of skill employed in playing the game itself. Given these two extremely subjective elements, I have illustrated the general fun/skill biases of each BCS conference by creating an even more grandiosely subjective presentation of an overall conference's profile.

Note: this relies exclusively on my own biased estimations of teams watchability and overall skill. It solves no problems. However, nothing in college football ever does, and this does provide some visual assistance when attempting to explain why the general perception of certain conference leans one way or another, or at least gives an entirely unscientific graph one can present as fact in an argument.

If this fails, just make up some numbers. It's what everyone else does, and if you doubt this WOOO SEC SIX IN A ROW CAN'T ARGUE WITH THAT. See? Science. 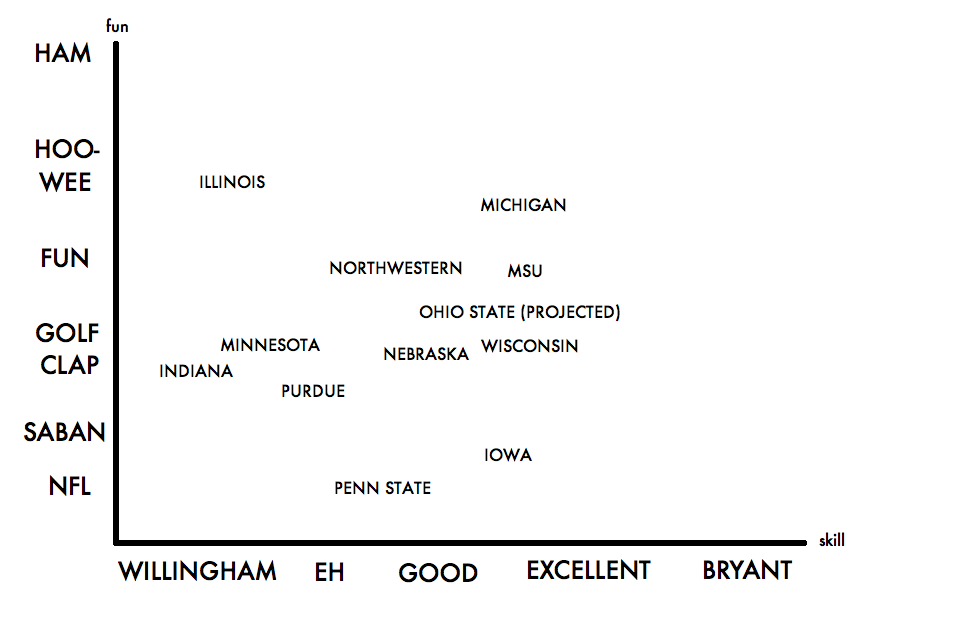 Iowa never did anything interesting on purpose and their spot here reflects this. Penn State now has an NFL-style coach with the defensive coordinator who almost had Auburn losing to Utah State, so without factoring in anything else whatsoever they were headed for a rough year anyway, and just lay down there for a while, Penn State. It is for the common good.

The rest flatters the Conference of Leaders and Legends. The general bulk of the conference falls somewhere in the intersection of good (which is good, and not damning with faint praise) and fun. Ohio State's a bit underplayed here because of a coaching transition and some uncertainty, but there is no reason Braxton Miller cannot turn Ohio State into something resembling Brady Hoke's miraculousy charmed 2011 Michigan team. Michigan State under Dantonio is always good and several degrees more interesting than you might think. Whatever Northwestern lacks in talent they make up for in effort, discipline, and the willingness to try anything at anytime.

Michigan has Denard Robinson. So, yeah. They go way up there.

The idea of Wisconsin is always a bit more fun than the actual team they put on the field, though throwing 70 points on an opponent does liven up the proceedings from time to time.There is a clump of utter misery at the bottom of the conference, but as Samuel Johnson said, in order for here to be order, there must be subordination. In the cases of Purdue, Indiana, and Minnesota, there's a lot of subordination going on there. (Illinois under Tim Beckman, bad though they might be, should at least be entertaining.) 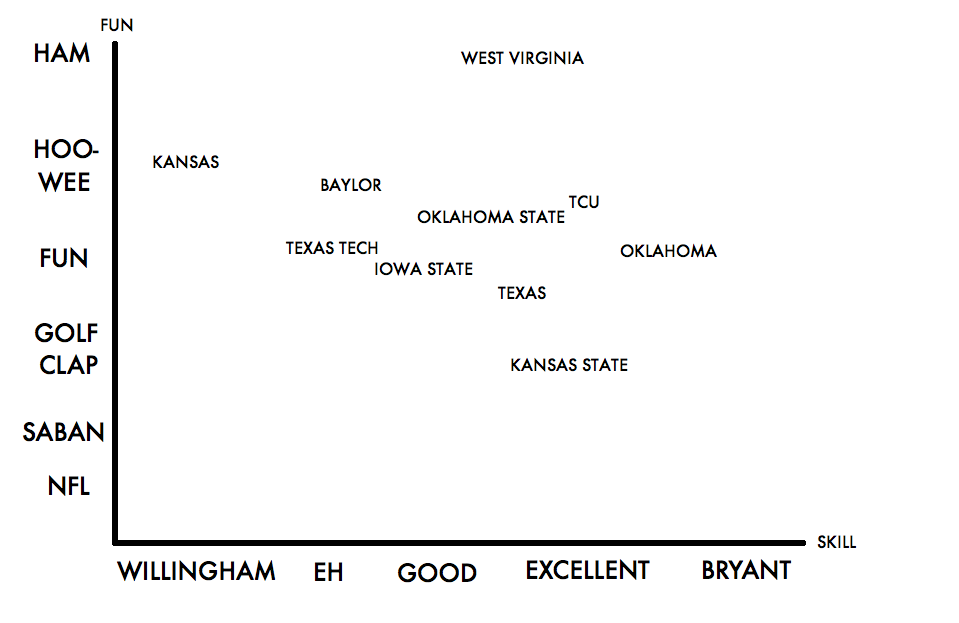 Look way, way down at the bottom: Kansas State is the least fun you'll have watching the Big 12, and even then there is a kind of caveman pleasure to be had in watching Collin Klein run the single wing in 2012. High-variance teams like Baylor, Texas Tech, and Iowa State specialize in detonating randomly on some unfortunate Texas or Oklahoma every year or so. Even Kansas is fun, if you like rolling disasters. (And I do.)

Dana Holgorsen's Hair Raid offense makes WVU the most volatile substance in conference, but TCU's daredevilry remains deeply undersold. Gary Patterson runs a weird 4-2-5 defense and a spread offense AND won a Rose Bowl against a Wisconsin team that outweighed his defense on the line by 450 pounds per man. This number is not accurate, but it is truthy. 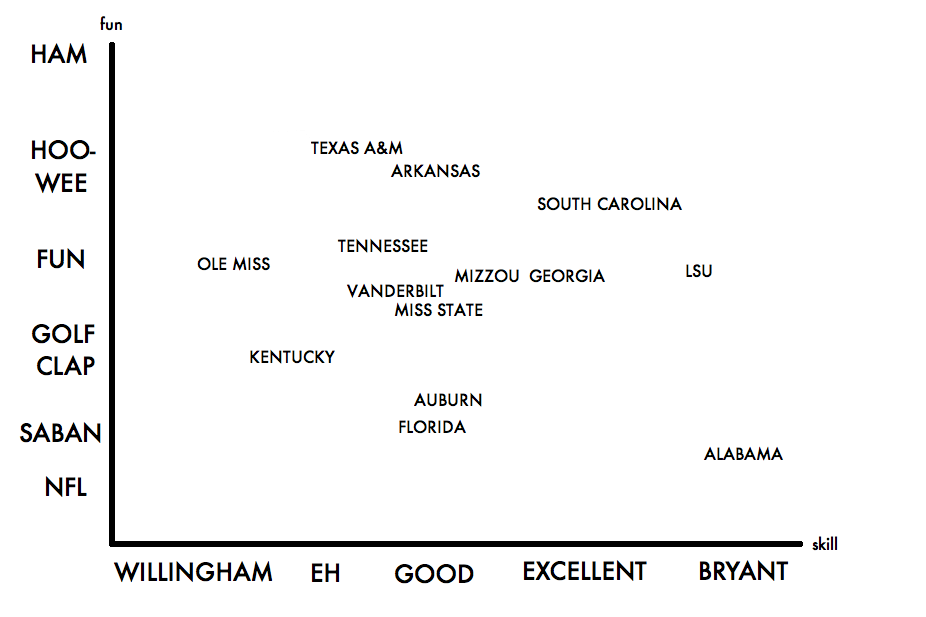 This did not come out as badly as we thought, but was not without some surprises. LSU is less fun than you think, mostly because Les Miles picks his spots to be genuinely batty. Over at Arky, though John L. Smith will pick his spots to be genuinely sane. That is why the Razorbacks are way up there in fun, but downgraded in skill, because hoo-wee! John L. Smith, head coach at the SEC's craziest-ass football program. This is totally and actually happening.

Alabama sits at the intersection of Bryant and Saban, meaning they're awesome, and as interesting to watch as an autopsy. We're not saying (but we're saying) that Saban enjoys a good autopsy. Florida is not much more interesting, but is half as good. South Carolina is better skill-wise but less fun now that Spurrier's given up on ever throwing the ball in the 21st century, Georgia and Mizzou are both just fun enough with UGA maintaining a clear talent advantage, Tennessee has a real live offense and a coach with nothing to lose, Texas A&M brings the Air Raid to the SEC West, and Ole Miss, doomed from the start, should at least be more fun to watch than Houston Nutt's orphaned 2011 team.

Vandy and Mississippi State are acceptably entertaining and good at what they do. (Losing close games in heartbreaking fashion thus far is "what they do.") Kentucky is not a good football team. Auburn could win four games or win 10, but assume they're just a slightly better Florida right now. That does not say much, but it is as close as we could get to describing whatever it is Auburn is this year, which is "unambitious and punty." 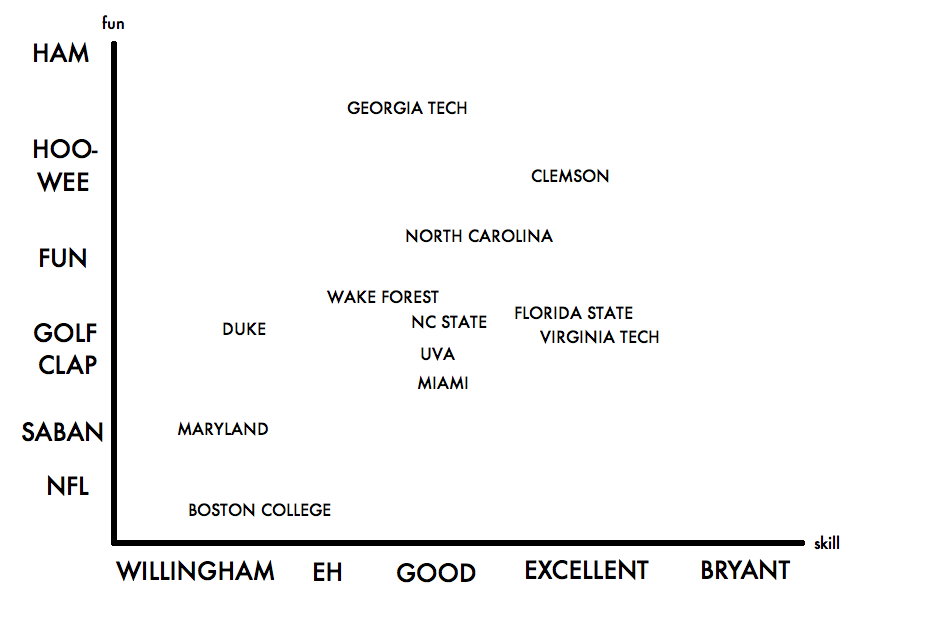 See that big clump of teams in the low middle right around "Good/Golf Clap?" It's not that the ACC is bad, it's just that so many teams fly along at about the same skill level with the same style of play that unmuddling them becomes a sport of the bored and overly curious in and of itself. N.C. State is marginally more interesting than UVA, UVA is marginally more interesting than Miami, and all three are stalled at something like the same level of overall skill.

The basement does not help. Duke and Boston College were already there, but Maryland's plunge into the depths of submediocrity makes the bottom of the ACC a wretched hut of arthritic spiders praying for a stray fly to crash land through the door. If this seems like an extreme metaphor, you clearly did not watch Maryland or Boston College play last year.

Hope? It's there. Virginia Tech and Florida State are both passably entertaining and excellent football teams, albeit ones that will do their business in an, um, "business-like" fashion. (JImbo's tainted with Sabanball; Frank Beamer is suspicious of offensive touchdowns, and has been since the Ford administration.) Clemson, for whatever else they may be, is rarely boring, and often way better than anyone's willing to admit.

Georgia Tech is way up there; just being crazy, entertaining, and probably really frustrating to those who wish they'd recruit some defense, run out of the shotgun every 50th down or so, or recruit a quarterback capable of throwing a pass that doesn't look like an anvil tumbling end-over-end. But otherwise: totally fun. 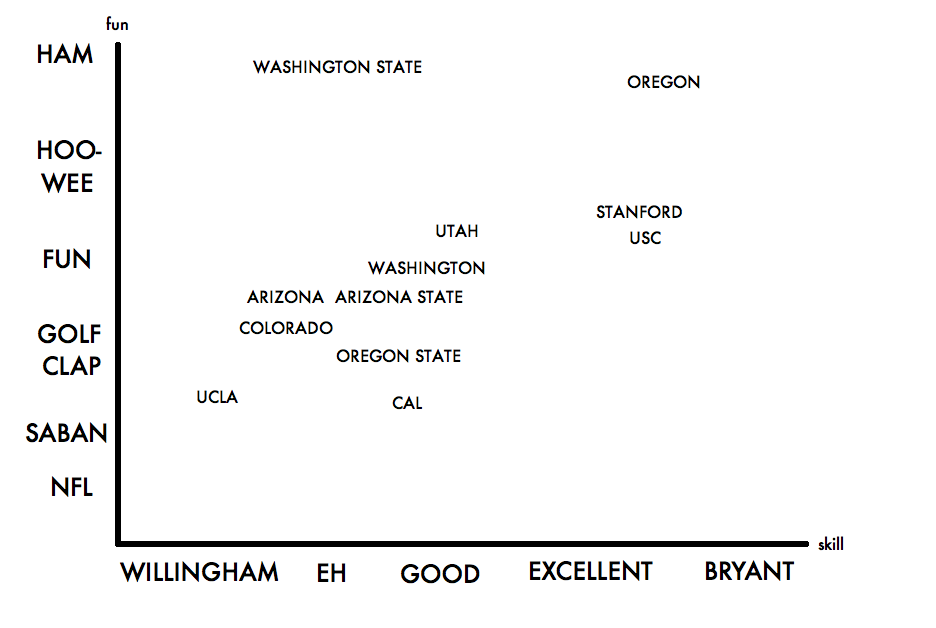 The difference in the Pac-12 are the outliers. When teams are really good in the Pac-12, they tend to be really good and play the sort of football you willingly forfeit sleep for in the name of entertainment. Stanford is a margin call in entertainment value on the basis of their defense over USC. Oregon towers over both in entertainment value. If you do not agree, you may not be stricken with crippling ADD and may not trust the hurry-up spread option. I pity you on both counts.

Washington State earns a Ham rating for the sheer entertainment of Mike Leach's offense attempting to sew together the scraps of the Paul Wulff era. Otherwise, the Pac-12 has the usual bell curve, and then poor Cal, UCLA, Colorado, and the Arizonas rounding out the conference's full, luscious bottom. If the ACC is big in the middle, the Pac-12 looks like an upended barbell in terms of fun/skill: a brawl at the bottom, not much in the middle, and then high wire kung-fu fights at the top. 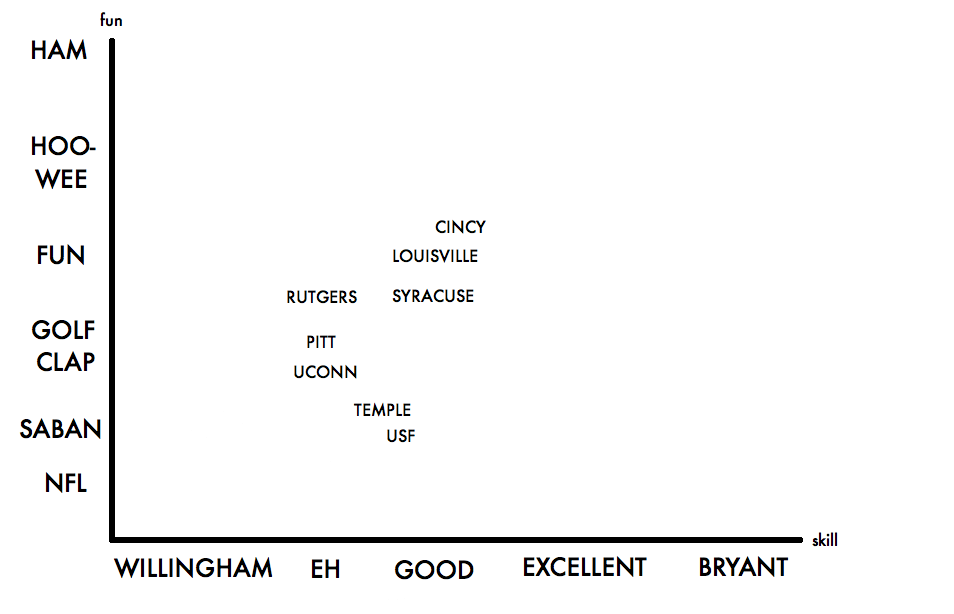 I immediately regret making this.

And let us all pretend this never happened.

While we’re here, let’s watch some of the many fine college football videos from SB Nation’s Youtube channel: